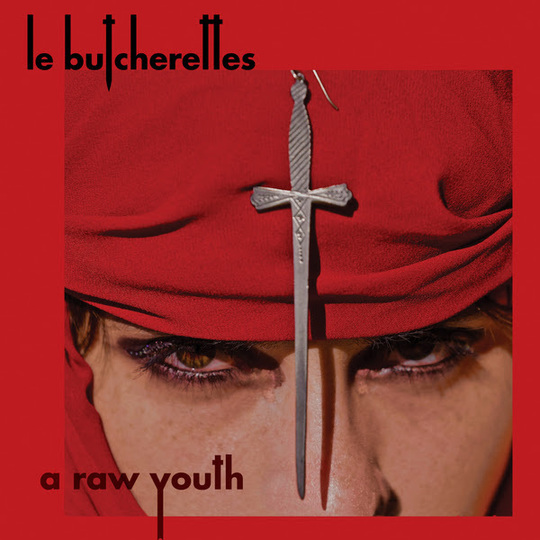 It’s funny, how well-intentioned male rock fans often glance once at outspoken girls with guitars and compare them exclusively to other outspoken girls with guitars. True, Teri Gender Bender of Le Butcherettes wears her PJ Harvey badge on her sleeve; true, she plays wicked guitar and dominates the space around her, not as a victim or a sprite but as a total BEAST. And yes, four years ago, you could easily file Sin Sin Sin as a fledgling revolt, tumbling on stilts and tearing down paintings and dueling misogyny and laughing at every step.

But time passes. The band grows. A Raw Youth captures Le Butcherettes on the centre stage of RAWK, not the fringe. We’re talking spandex, sold-out arenas, virtuoso frontmen who stand as gods above the mortal masses. And I swear, as a classic rock fanatic, I thought I could never ever get the appeal of Sammy Hagar over David Lee Roth, but now I understand. Everything’s bright, massive, on the steely platinum edge of the superego Eighties, so above the world that Diamond Dave’s libidinous fantasies shrink into a bottom drawer. On his biggest singles – 'Dreams', 'Why Can’t This Be Love' - Hagar shone as an illusion of a saint, a hologram of a romantic.


On the flipside, Teri has all the same undeniable, space-spanning FORCE – just dig the very Van Halen-esque one-two punch of 'My Malley' and 'Reason to Die Young' – but none of the illusions. Le Butcherettes may rock from a high pedestal, but they also invert the usual rock star stances. “Reason to Die Young” bucks the YOLO mentality of the insensitive masses, and thrusts forth the existential despair that the rest of us feel at our blackest hour.

You want more truth? All right, you asked for it – howzabout big blaring fake horns and a narrative about how sex trafficking ravages nations ('Sold Less than Gold')? Or howzabout the Elastica-like banger called 'They Fuck You Over'? Me, I’m partial to 'The Hitch Hiker', where Teri plays both the hitchhiking lady and the predator male driver that plans to “leave your bones in holes”. None of these come off as preachy or presumptuous; rather, Le Butcherettes convey their cautionary tales with witchy glee, reveling in the mischief they wreck on

But, um. Did I mention they rock? Oh man. Le Butcherettes rock so much. SUCH DRUM POWER. Oooooooh, the slinky sexy thump in 'Stab My Back' makes me salivate, and Teri’s Robert Plant-y croons seal the deal. And 'Witchless C Spot'! What could be more rad than that behemoth of a chorus, worthy of Def Lepperd or Motley Crüe? Go on, you pansy musos, cringe. Le Butcherettes have no shame.

Oh, and Iggy Pop’s here, too! And he underscores Teri like the demon prince he is on a really cool, 'Tomorrow Never Knows'-ish swirling tune called 'La Uva'. And it’s genuinely trippy, with odd pianos trickles jutting out and tinny strings snaking in and out from a really distant radio station. Plus it still rocks. And Iggy still rocks. John Frusciante’s on here, too – you know, the Red Hot Chili Peppers guy who left Red Hot Chili Peppers and left a gaping hole of soul – but the burbly cool-down funk of 'My Half' injects this showboaty rock wankery that the Butches had been inverting and cock-blocking this entire time. The beautiful cathartic wails here woulda been soooooo much better without the hotshot guitarist competing in the background.

Ah, well. One dud closer can’t dent Le Butcherette’s holy radness. We’ll just pretend that A Raw Youth has 11 tracks, so that the song with best title – 'Oil The Shoe If The Critter Knew Any Better' - destroys everything with its defiant riddles: “when will you be able to / grow another inch / listen to the llama’s words and eat your vegetables?” Yeah, I’ve got nothing on that. Sounds righteous, though.

Anyway. Conclusion. A Raw Youth aims to sabotage meathead rock and succeeds. Le Butcherettes preserve all the best parts – the rush, the muscle, the vocalist as GOD – but expose the celebrated macho ego as a terrorising other. Yeah, the song structures seem like stencils of bigger hits sometimes, but whatever. Still beats Hagar.