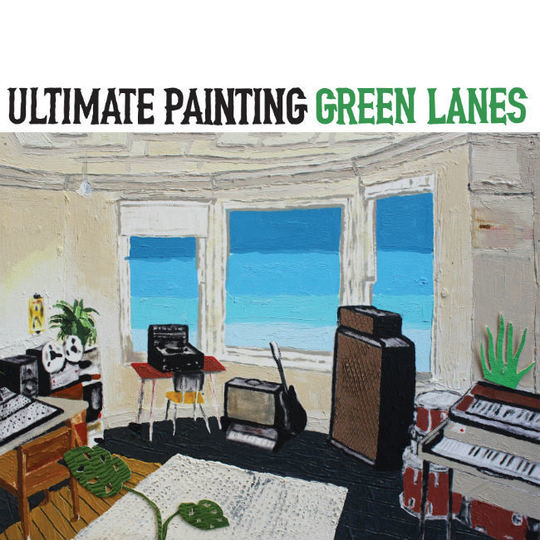 It’s great, isn’t it, when something is just nice. Take, for example, Midnight in Paris: I’m confident that no one thinks it’s Woody Allen’s best movie by a long shot. You might argue, even, that it’s only superficially the work of the same man who gave us Hannah and her Sisters, Crimes and Misdemeanours and Zelig. But I’ll be damned if it wasn’t his loveliest, most enjoyable movie in at least a decade.

Green Lanes, the second album from Ultimate Painting, is really, really nice. It doesn’t do anything special, or new, or especially original. Hell it doesn’t even vary, really; ‘Woken by Noises’, its 11th and penultimate track, is the first one that isn’t built around a soft, clean electric guitar arpeggio (instead it’s a fuzzy, stoner rock-type electric guitar). If I was going to even pretend to be objective, it’s the kind of thing I’d slate the album for.

The band prove themselves adept at crafting dreamy pop songs, with catchy melodies – ‘Sweet Chris’ is a clear highlight and is reminiscent of ‘So Long You Pretty Thing’, the closing track from Spiritualized’s last album – and lovely, soft, understated vocal harmonies. Okay, all the songs follow pretty much the same formula and sound a bit like something else, but (a) the album’s barely more than half an hour long; shorter even than the new Wilco, one and (b) it’s a formula they’re really good at following.

It’s also worth noting that while everything sounds like something else, it always sounds like something good. The aforementioned ‘Sweet Chris’ sounds like Can’s ‘Thief’, ‘(I’ve got the) Sanctioned Blues’ is a bit ‘Ballad of John and Yoko’ and the guitar line on ‘The Ocean’ sounds exactly like ‘Gimme Shelter’. Of course saying a song sounds too much like ‘Gimme Shelter’ is like saying “That’s a nice pull shot, but it was a bit too much like watching Viv Richards.”

So far, so six-out-of-10. But then Green Lanes gets a bonus point for using its prettiness to disguise some good ol’ fashioned, Guardianista (if you read Drowned in Sound I assume you read The Guardian so you’ll like this too) Tory bashing. “We stop at London Fields/I ask ‘hey what’s the deal?’/Conductor says the track’s a mess/That someone’s had enough ... You’ve really made me late you know/You’ve really fucked me and so/The sanction that I get’s on you”. You can’t mention London train stations as many times as this album does and be the most eloquent, but we can all heartily applaud the sentiment and its caustic vim.

I’ll level with you: I probably won’t remember this album all that well in six months. When it comes to end of year polls, well... one magazine I write for asked me for a top 45 last year, so this is probably going to get stuck in at around number 25 or someplace where I’m not really paying attention to the rankings any more. But then there are maybe only a dozen or so albums a year that anyone, if they’re being honest, will go back to much, much later; there are tonnes more that are just good and this is as decent as any of them.