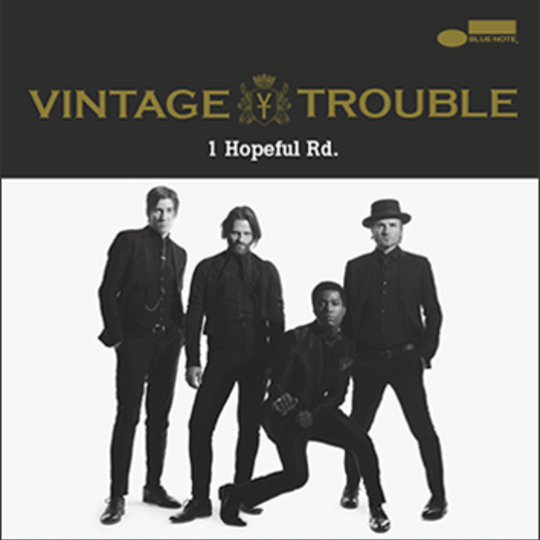 Alright, y’all. Let’s just cut to the chase: some folks don’t like change. They’re the sort that stockpile Eric Clapton tapes, ride around with ZZ Top and Led Zeppelin from a corporate rock radio station in their car every day, and express kneejerk disgust whenever they hear anything without a guitar. (Welcome to my childhood.)

For those types of folks, this here Vintage Trouble record is for them. The four Californians smother their country-fried rock with more southern tropes than a gravy-sodden biscuit, from the bits of blues and gospel and old timey R&B to titles like 'Run Like the River' and 'Doin’ What You Were Doin’'. And while you’d expect some real barn-burners from this lot, every twangy slide and soulful croon sounds too damn polished to light any metaphorical fire.

For the seasoned road warrior, a cruise down 1 Hopeful Road won’t lead anywhere new. The straightforward 'Angel City, California' chugs as if Creedence Clearwater Revival’s steamy swamp is now a glitzy tourist trap; 'Strike A Light' ends on a cribbed James Brown vamp; 'Doin’ What You Were Doin’' serves up 'authentic' soul food from a Popeye’s kitchen. There are no off ramps, either. Even the most toned-down numbers, like the megachurch hymnal of 'Another Man’s Words', follow the same rigid, glitzy route to salvation.

The white boys of the band play up their blues traveler personas as much as they can, slinging thoroughly rehearsed Van Zant riffs on numbers like 'Before the Tear Drops' and 'Run Like The River'. But these are both knockoffs, pure toe-tapping entertainment that detaches itself from, well, the blues in life - getting stuck in a boring job, paying for healthcare, losing that job, brushing against prejudiced cops, you get the idea. ZZ Top did the same, but at least they didn’t pretend to preserve the past or bare their souls. Who takes a dude with a three-foot beard seriously, anyway? Exactly. Vintage Trouble, on the other hand, want you to believe they’re the stewards of tradition, the bearers of the torch.

And much of that persuasion stems from frontman Ty Taylor, an inexhaustible and downright charming fella with a pretty yowl, the kind that yelps and climbs after every verse, in any open space, in the time-tested ways of soulful embellishment. That voice fills whatever crannies were left, lifts the cookie cutter country rock into a Stax boiler plate. And yet, he’s why I still recognised the band’s name, four years after I first saw him cut loose on Jools Holland (hey, I was an American visiting the UK, I didn’t know any better). All wiry bolts and sharp suits and tappity-taps – my mum and I dropped jaws then, cos she’s one of those rock n’ rock til she dies chicks, and I was still a greenie on the new music scene.

But I look back now, and I see all the other late night live shows the boys pandered to, and I listen to another squeaky soft rock number like 'My Heart Won’t Fall Again' on the new album, and I start a-wondering who cooked up this whole Vintage Trouble scheme. It has to be a scheme. Someone said, right-o, there’s the man who’ll make the weak-minded swoon, here’s the blokes who swap Led Zep stories all day, now let’s mash some blues tropes together like two-timin’ women (truth – roughly four songs on the album refer to unfaithful/deceptive lovers) and Christian imagery and BAM! we’ll dominate the over-40 market. Has to be.

If Vintage Trouble ditched two songs, scuffed the corporate sheen, sang about something other than love, and really broke some rules, (marimbas? Minor keys? Dubstep disco breakdown?) instead of posturing as established rulebreakers, then MAYBE this route could lead somewhere new. As is, the only folks who’ll get a kick out of 1 Hopeful Road are the ones who really don’t want to go anywhere at all.