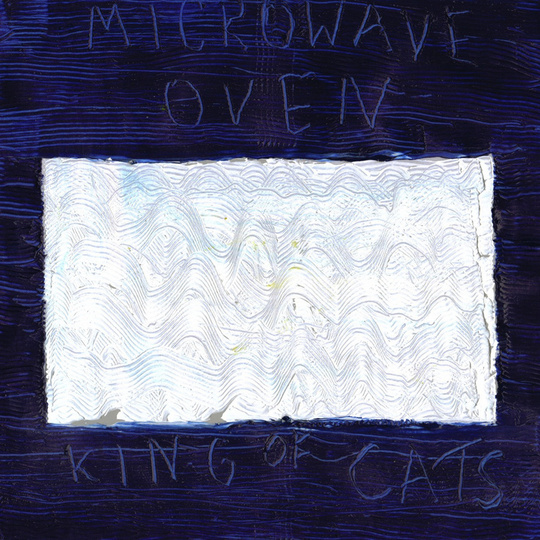 Remember the old days when bands used to release two or three albums a year? Well, to be honest, I don’t either, but Wikipedia and my dad tell me it definitely used to happen. I know we’re already overwhelmed with music as it is (thanks, internet!) but somewhere in this thirty-something loser there’s a spoiled teenager who wants bands to still do that and bollocks to practicality.

That’s one of many reasons for me to like Max Levy aka King of Cats, then, because Microwave Oven represents his second LP release in seven months after Working Out last November. While Levy had been loading Bandcamp with songs for several years like Bradford Cox in his heyday, Working Out was officially billed as his debut. I guess this is reasonable given that it follows traditional debut conventions of combining recordings of a the best songs from his first few years with some newer stuff (although that’s where any hint of a relationship between King of Cats and conventionality ends).

Inevitably, Microwave Oven is dominated by Levy’s voice, which sounds pretty much nothing like anyone else’s in the world. It’s drenched in pure emotion, and this, coupled with the nakedness of his lyrics makes for a listen which is frequently as uncomfortably intimate as it is heart-warming. On several occasions Levy is joined on vocal duties by new Joanna Gruesome singer Roxy Brennan, who provides a lovely counterpoint to his desperate yelp on ‘Guilty’. The last of Roxy’s guest spots ‘Naked Fucking Bodies Flyin Hi’ turns out to be one of the album’s finest moments. It’s sparse, spacious and very matter-of-fact in its lyrical and vocal delivery, all of which make it absolutely beautiful.

Elsewhere, Microwave Oven contains several brilliantly nuts bits of pop which display the lesser-noted fun side of King of Cats. ‘Cover My Ears’ comes on like some kind of magnificently fucked-up take on Belle and Sebastian’s new disco direction, except it sounds like it was made on a kids’ keyboard and culminates in Levy dementedly screaming “We will vomit together”. ‘Dump’, meanwhile, is an exhilaratingly aggressive seventy-six seconds of sped-up grunge and ‘Incorrect’ is a brilliant mess of noise.

Like Working Out, though, it’s the songs where Levy’s baring his soul that Microwave Oven is truly at its best. The aforementioned ‘Naked Fucking Bodies…’ is a definite highlight, but the record hinges on the starkness of ‘Car Park’. It sees King of Cats “hanging with my new friends at the doctor’s car park / when you come up and tell them all of my secrets”, before lamenting almost casually that “my best friend will make a guess that I have lied / you will stick your filthy hand in mine”.

Levy’s nous for making mundane details seem significant is similar to his DIY scene contemporary Trust Fund and it’s this which makes him such a powerful artist. On ‘White Van’, for example, he’s singing about someone who will “kick a can up in the gutter / then go in search of other missiles for your foot to launch”, and something in the way he delivers these lines makes this bit of day-to-day detritus seem like the most poignant thing you ever heard.

Maybe I should try and convince that selfish bit of me that it’s probably for the best that bands don’t do albums every six months as a matter of course. If King of Cats keeps on releasing records at this rate, there’ll be too much to digest, so the rest probably wouldn’t get much of a look in after all.