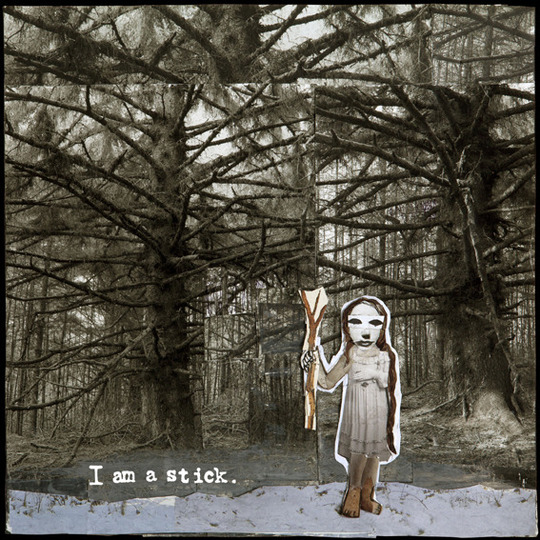 The first time I 'listened' to Baby Dee I was asleep. A friend played 'The Robin's Tiny Throat' to wake me up on a Sunday morning and I remember how sneakily Dee's sparse piano made its way into my ears and reconnected me with the world: 'What is this?', I asked. 'Shhh, wait till the end'. Dee's songs read like short stories: though they easily blend in with whatever state you're in, there are details and details to take in. Except for the occasional divertissement indebted to her humorous, 'dark cabaret' side (and to her past as a street performer), most of her songs are exquisitely moody and spacious, much like Current 93's piano-only masterpiece Soft Black Stars or Kate Bush's A Sky Of Honey. Take 'Unheard of Hope' from A Book of Songs for Anne Marie (2010): just three notes on the piano and her meandering voice, typically divided between singing and recitative. It could hardly be more stripped-down, but Dee's a master in keeping you on your toes.

I Am A Stick comes four years since Regifted Light (her latest on Drag City) and three since State of Grace, her collaboration with Annie Anxiety. To her fans both the title and the sleeve will look somehow familiar. Not only did Dee work as a tree surgeon in the past, but in the song 'Black But Comely' – one of the highlights on Anne Marie – she sang: “No, I am not a tree of sticks/But a forest of hemlocks and beeches”. Whatever that metaphor means to her today, in the opening track of I Am A Stick she whispers: “I am a stick/and I am happy”. This is indeed a joyous record, a 'road album' full of stops and curious anecdotes. Dee, whose list of past collaborators includes Marc Almond, Current 93, Antony, Bonnie 'Prince' Billy and Andrew WK, is here joined by a band: Alex Nielson on drums, Jordan Hunt on strings, Joe Carvell on bass, Victor Herrero on guitar and Colin Stetson on sax. Working in what often sounds like a free-form style, the band's instrumentals punctuate Dee's piano arrangements, adding an element of unpredictability that's definitely more 'experimental' than anything she's done before.

In the title track the band run circles around Dee's drawl, 'pitching' ideas here and there only to retreat as each verse comes to a close. The way they hint at the possibility of a crescendo reminds me of Josephine Foster's psych-folk opus This Coming Gladness (it is perhaps no coincidence that both Nielson and Herrero played on that record). Herrero's rumbling guitar is particularly incisive on some of these new tracks. For all its formless structure, in its second part 'Sky of Loving Arms' eventually delivers on the promise of a rock explosion to great theatrical effect: guided by Dee's mounting piano, the band beautifully electrifies the atmosphere. 'Whose Rough Hands', which apparently took Dee eight years to finish, is another good example of this attempt to challenge the inherent quietness of her songs with a pinch of organised chaos. This is probably why some of the most 'recognisably Dee' solo tracks on the record ('But In My Dream' or 'Up Tree, River Down'), though no less touching and gorgeously executed than usual, at times feel a bit disconnected from the tautest and most exhilarating episodes ('Bendy Bus', the Tiny Tim-esque interlude 'Okadoka').

I Am A Stick travels at different speeds. What has remained intact is Dee's ability as a storyteller. 'Big Love' tells the story of a nun who failed to keep her vow of chastity, and of how a merciful St. Brigit intervened to interrupt her unwanted pregnancy. Segmenting the plot into a series of short scenes, Dee swings and captivates for nearly six minutes. As with all Dee's best songs, it's creepy, tragic and oddly funny.