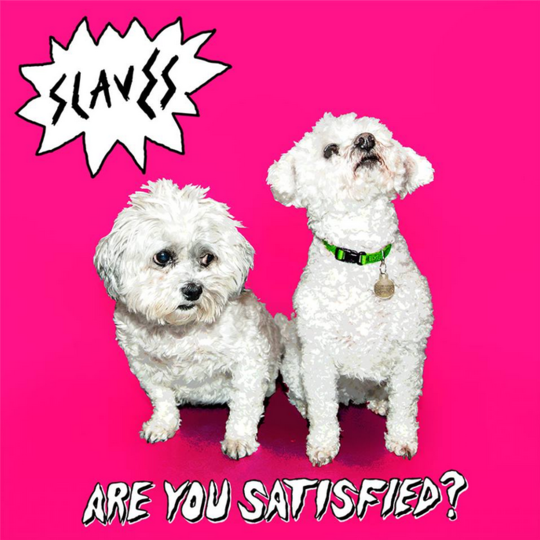 Thirty seconds into their first album, Slaves offer a promise.

The gauntlet is down. In the grand tradition of punk delinquency, Slaves cast themselves as rabble-rousers, disrupters of the status quo. But thus far in 'The Hunter', all they’ve managed is fuzzy logic: scientists don’t "invert the facts" about global warming, that’s what politicians do. And since when did researchers collect "donations"?

This is the crux of Are You Satisfied?: two white dudes present themselves as the Sex Pistols reborn, 'the voice of our generation'. But peel back the façade, and you’ll find two white dudes parroting phrases and stealing time-tested tricks to sustain the rebel mirage, to cover for the fact that they have no clue what they’re even talking about.

Over and over, singer and drummer Isaac Holman sneers at some general listless population, suffering from an amoebic, self-inflicted malaise. A laughably Nickelback-ish refrain on 'Cheer Up, London' suggests that these folk are DEAD ALREADY, DEAD DEAD ALREADY, READY. And the one verse goes “Put another hole in your paycheck / are you done digging your grave yet?” But without any context besides “London”, they may as well shout at a wall.

'Well, that’s not fair, Lee,' you say. 'Perhaps these Slaves are more worldly and well-read than you make them out to be?' Certainly, hypothetical reader, certainly. Which is what Isaac told an intrepid Clash reporter not too long ago:

“I know I speak for both of us when I say it’s also not just music that influences us,” says Isaac. “Other things include people – usually females – as well as films, quotes, books, animals, places, conversations. The list goes on…”

Imagine this conversation in action. Look at that guy’s mug while he rattles off these meaningless signifiers and tell me he’s not pulling this out of his ass. Especially the 'females' bit, the part he tossed out like a frat boy tossing a free throw at a halftime basketball contest, cos talking about 'females' scores points with the indie kids.

See, I know he’s pulling this out of his ass, because neither of them Slaves wrote very good songs about women. 'Sockets', a commercial-grade garage tune (you know the type – polished, sterilized, injected with steroids, re-packaged, and resold as 'authentic'), talks about the typical boy-crushing, impulse-buying teen girl stereotype, and rollicks along to the refrain “IT WASN’T OUR FAULT”. Particularly painful is the bit about “trying on shoes is becoming a problem / but that’s the way it is and that’s the way it’s going to stay”. Okay, bub – so this self-inflicted malaise of over-consumption you spoke of earlier, is that innate to us womenfolk?

Then there’s 'She Wants Me Now', another third-hand imitation (like Jet miming the Clash), and it’s exactly what the title suggests. And while the chorus is annoying enough – I can already see a dozen companies queuing for the rights, banking on its illusion of youth to sell cars, movies, and beer – certain verses irk me even more: “you / don’t understand / that I’m a man / and I’ve got responsibilities”. Perhaps these women are presented as extremes, but the way Isaac explains their behavior suggests that they have no life outside their romances.

Anyway….where were we? Oh, yes – Slaves as pirates and parrots. 'Feed the Mantaray' is nothing more than a decent hybrid of Deep Purple and Black Sabbath. In the token acoustic track, the blokes predictably act all wounded and sensitve by pretending to listen to a woman speaker (represented by the male singer, of course). 'Wow!! 7 AM', as a stoner’s slacker anthem, pounds home no point whatsoever, but tries to make one anyway with unreasonably bleak imagery, like maybe you shouldn’t work and get up early, because the narrator doesn’t and now has more hair and less cuts than you.

I’ll give ‘em this – Isaac can pull off a rather convincing Johnny Rotten impression, with his many gloating asides and snobby tone. But if he wants to shock and frighten anyone, he needs to do better than shame certain stereotypes (mostly female), laugh at London, and exalt himself over everyone else.