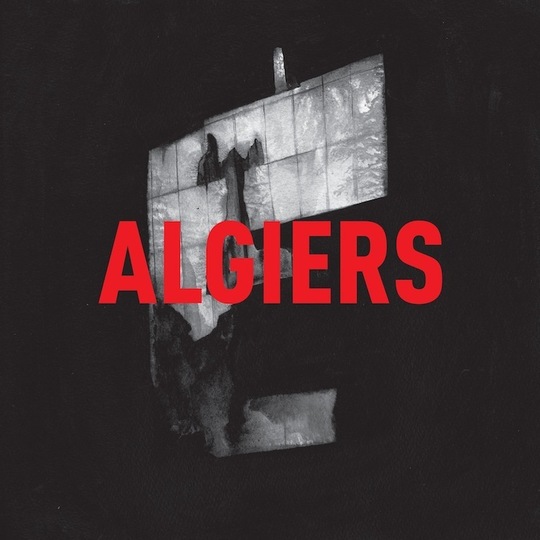 Current touring buddies of Matador label-mates Interpol, Algiers serve notice here with a debut album of brooding, almost malevolent intensity, that they have the potential to emulate, and perhaps even surpass, the success of their more illustrious forebears. Seriously. There is that much potential in this self-titled debut album. You may very well scoff. You might think that my ears deceive me, or that I have used the Bank Holiday to over-indulge to such an extent that I’m not hearing straight, but just give this album a listen, one solitary, initially dispassionate listen, and you just see if the combination of impassioned Sixties and Seventies soul, dark Mancunian-influenced driving synth beats and straight up rapturous rabble-rousing does not completely entrance you. I promise you, give this record the space to burrow its way into your consciousness, and it could just have a similar impact to the one which “Turn on the Bright Lights did all those years ago.


Algiers - "Blood" from Algiers on Vimeo.

To be sure, the bands sound nothing alike, for the caustic post-punk stylings of Interpol, with Algiers instead see taut, synth-driven soul, but from the moment the competing rhythms of ‘Remains’ begin to come apart, and the vocals of Franklin James Fisher come shrieking and caterwauling into view for the first time, you know that you’re in for a dark, yet irresistibly wild ride. This guy’s got soul, and a fantastic set of pipes. ‘Claudette’ features a fantastic harmonic vocal padding effect, and some gloriously dissonant guitar squall amid the tuneful melody from Ryan Mahon and Lee Tesche. As the atmosphere builds, it would be all too easy to lose the solidly pulsing groove of the bass line, which ensures that this most contemporary of atmospheric guitar rock tunes stays firmly beholden to its soul heritage.

‘And When You Fall’ shows a different side to the band with a bright skiffle beat underpinning another mass of swirling synths and never static melodic hooks.

You might have picked out from the clunky and clumsy descriptions here that I’m struggling to truly convey the majesty which lies at the heart of this fantastic record. Some reviews give you clear pointers about what to expect when you hear an album, but with Algiers this feels like a nigh on impossible task. There’s just so much going on, so much to wonder at. Even in the record’s latter stages, we find the spellbinding ‘Games’ and ‘In Parallax’ , two tracks that lesser bands would build whole albums around, buried deep in the later recesses of an album, running the risk of being ignored and unheard by those without the attention span to persist. Ensure you do. If you don’t you’ll be totally missing out. The latter, particularly, is a real highlight, as a driving beat and elastic bass part give Fisher the space to really let rip. As if he hasn’t been doing that throughout the album, this song serves notice that there is still even further for this astonishing vocalist to go in maximizing the scope of his vocal performances.

So, if you want a contemporary reference point, at times I was reminded of a (much) more soulful TV On the Radio, but that may well be an all-too-lazy comparison. I’ve myself never really heard anything like this before, particularly not something so wildly ambitious and yet so well realised.

Really, you owe it to yourself to give this album a chance. I wouldn’t be surprised if they play Interpol off the stage this summer. I can pay this collection of songs no higher compliment than that.