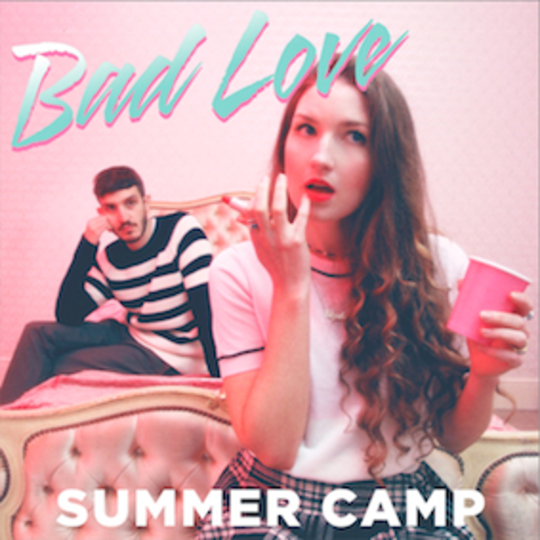 The songs on Summer Camp’s Bad Love describe relationships so familiar I can pin the names of boys I have had romantic misadventures with to each one. The banging disco-pop single ‘Bad Love’ is J, the guy who let me down, then I let down, then I let him let me down again even though I knew exactly what was coming. ‘You’re Gone’ is a fuzzed-out reflection on what it’s like to disappear into the feelings you have for someone who’s not so into you - it’s the memory of C, my first kiss, my first unrequited love, the first chips in my heart.

‘Beautiful’ is every guy I’ve ever crushed on so hard it felt like I might die if I didn’t get to have them. It’s made of all the emotions that conspire to convince you that Taylor Hanson would definitely fall in love with you if only you could get him in a room for five minutes. ‘Just Fine’ is how I felt before I broke up with M, while ‘Run Away’ is how I felt doing it. ‘Feel Right’ is what it felt like right afterwards and ‘So Wrong’ is the song that might have made me think twice if only I’d heard it beforehand instead of three years later. ‘So Happy So Sad’ is basically me at a certain point in every relationship I’ve ever been in, most of all with A. ‘Catch Me’ is kind of a fuck you to J again, while ‘We Are The Moon’ is a slow-jam ‘How Soon Is Now’ and the secret tryst I never had with B. ‘Keep Up’ is all the guys who never called and yeah, fuck those idiots too.

These are love songs, but not as you know them. In Bad Love, Summer Camp has written an 11-song essay about the hopeless side of love, the side you know is no good but you can’t help wanting. The heartache might hurt, but it hurts in a good way - the kind of pain you keep prodding with visits to their Facebook profile to see if it still stings. It all feels real in the way that a dream feels... real. This is what Summer Camp do so brilliantly; they create a world that you can wander around and get lost in for 40 minutes, a world where everything is very slightly askew. The magic happens in the little pauses and spaces in the songs, when you’re waiting for the thing you know is going to happen to happen. It’s inevitable that after “This is real in the way that a dream feels” you’re going to get “real” but there’s that pause. That moment. That beat that your heart skips.

There’s something inherently nostalgic about the album; musically it’s full of the echo-laden power synth of the Eighties, but there’s something very adolescent about it too. Like a teen movie, Bad Love feels like a shortcut to whatever era you came of age in. If I had a pencil case, I’d be scribbling Elizabeth Sankey’s endlessly quotable lyrics all over it right now, while lines like “I think sometimes you cradle that empty hole in your heart” would make a killer pass-agg MySpace coverline. It’s perhaps no wonder that Summer Camp had the ups and downs of teen love in mind after their previous release, the soundtrack to teen-movie docu-mixtape Beyond Clueless. There’s no genre that navigates the hormone-driven minefield of romance quite like the teen movie. That filmic structure seems to have translated well to Bad Love as well; songs swoop and dive into one another, punctuated by killer bass lines, the odd spoken word and abrupt mid-sentence cut-offs.

The best love songs are the ones that make you want to dance and cry all at once; and Bad Love has them in spades.