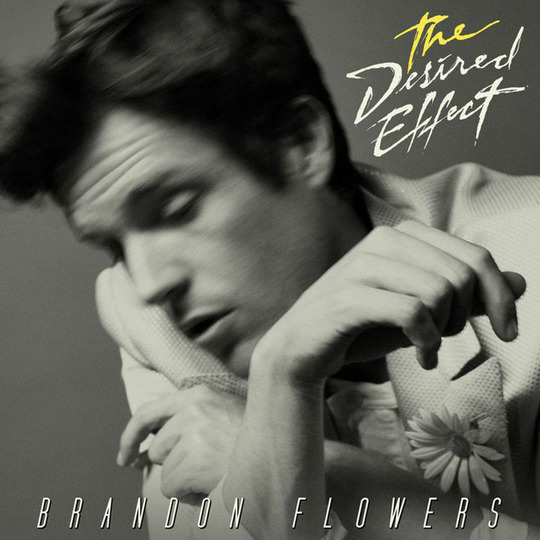 Brandon Flowers has made an album of which The Muppets would be proud. If you think that’s a slight, you’ve obviously never heard any of The Muppets’ consistently amazing musical numbers. The Desired Effect features all the musical theatricality of a full-cast number, the calypso stylings of whatever song Rizzo The Rat is involved in and a tenderness on the vaguely stalkerish ode to a sex worker, ‘Never Get You Right’, that Kermit can only dream of.

In lesser hands, this would just be a mishmash of nonsense. You’d be annoyed from the big band horns that open the album all the way through to the Nashville horns that close it. That Bronski Beat sample on ‘I Can Change’ would be irritating not nostalgically endearing. You’d find the whole thing cheesy in a 'Birdie Song' kind of way rather than cheesy in a Journey kind of way.

But the reason it works in the way that a Muppets number works is because of its intense lack of irony. The Desired Effect is self-aware but not self-congratulatory because Brandon Flowers just really loves pop music. He’s basically made an encyclopaedia of it to prove it. You can hear everything from the Pet Shop Boys to Bowie to Paul Simon to Sting to Queen to Elton John to New Order... There are are so many Eighties throwbacks that it might as well be wearing a highly flammable shell suit and trying its hair up in a side ponytail.


I can’t imagine anyone feeling anything but euphoria on hearing some of the biggest tunes - ‘Can’t Deny My Love’ and ‘Still Want You’ - come on. They work whether you’re double-fisting WKDs in the student union on a Tuesday night, watching Flowers on Sunday night at Glastonbury when you’re thinking about whether you should leave now to beat the queues, or down the front at a karaoke bar on a very ambitious first date. Every one of these electropop vignettes from small-town America is shot through with joy - it’s as though this is the album Brandon Flowers has been building to his whole career.

We can probably thank producer Ariel Rechtshaid for a sizeable chunk of this huge pop sound. After giving a similarly anthemic feel to HAIM, Vampire Weekend and Charli XCX’s recent releases, Rechtshaid is not afraid of an echoey drum fill or adding in a bit of synthy twinkle. He and Flowers have put literally every setting on the Casio keyboard to good use, turning catchy hooks into melodramatic stadium bangers with a carnival atmosphere.

But the problem with this constant up-and-up-and-up-some-more euphoria is that The Desired Effect has emotional climaxes coming out the wazoo. After the fifth crescendo building to a slight pause before - BAM! - another massive chorus, you’re sort of worn out. Songs that would feel huge on any other album are dwarfed by the tracks that surround them - the rockabilly-indebted ‘Diggin’ Up The Heart’ suffers from this more than most. By the end of the record, you feel like you’ve been through about 14 encores and you’re basically ready for a nap.

My notes after listening to the album properly for the first time ended with this vaguely coherent comedown: “Quite emotional now tbh. That was great. I’m exhausted.”