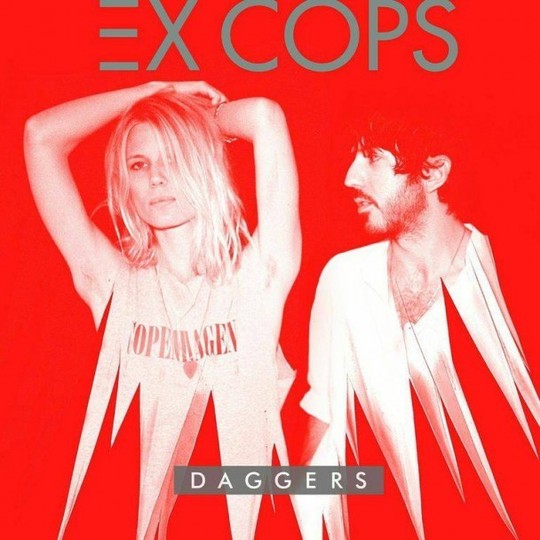 Arguably, boldly proclaiming that the new record from the band you represent 'reinvents modern rock' as the press release for the new album from Ex Cops does is a pretty dangerous thing to do. Things can go one of two ways: either those listening will fully embrace the hyperbole, or such claims will be used as a stick to beat the artist (particularly by journalists).

So here it is…perhaps unsurprisingly, and in spite of the presence behind the scenes of one Billy Corgan, Daggers does not reinvent modern rock. Surprised? No, I didn’t think so.

What might surprise you more so is that it is, in fact, a pretty stellar synth driven pop record. It sounds, at several points, like a long lost Abba album. Melodies are strong and sweet. ‘White Noise’ with its short, snappy sections and regular changes could be a confusing mess, but is in fact, a near-perfect pop song. Each and every section throughout the track will hook you in with a vocal, synth or guitar melody, or even the driving drums at the song’s conclusion, never outstaying their welcome, but always lodging themselves irrevocably in the deepest parts of your brain. ‘Pretty Sh***y’ is a deceptively dark song, seemingly about an affair gone wrong.. The reason it is deceptive is that the questioning and accusatory lyric is underpinned by a strident synth pop song that wouldn’t have been out of on a Madonna record circa William Orbit.

Meanwhile, ‘Burnt Out Love’ is a slinky, almost seductive eulogy (again) to lost love, once again containing a killer chorus. In fact, it’d be easier to say that there are no songs among those on show here which do not pack a beautifully-rounded melodic punch. There is some serious songwriting nous apparent here.

‘Tragically Alright’ takes things in a distinctly Eighties-wards direction, with a woozy sheen of melodious new waveyness. The subtle introduction of, and focus on the piano is a nice touch. This is a song that wouldn’t have been out of place on recent albums by The War on Drugs or Tobias Jesso Jr, but in fact surpasses the heights attained by either act.

There is a sense of darkness which pervades Daggers somehow at odds with the melodic and harmonic content. Before you know where you are you’re gleefully nodding and tapping along whilst the narrative arc of the record tells of brokenness and despair. I guess you can have fun while everything is going wrong too.

Frequently beautiful, as on ‘Rooms’, with some splendid harmonies and a building intensity which peaks and falls at just the right moments, this is an altogether surprising record. Amalie Bruun’s vocals, throughout, are particularly noteworthy. Her voice is capable of anything you could hope for in a great pop vocalist. I have a hunch though that it will be as songwriters that Brunu and her colleague in Ex Cops, Brian Harding, will find their ultimate fulfilment and success. This is an album full of beautifully crafted songs, easily the equal of anything being churned out by the pop conveyor belt. As the album closes with ‘Weird With You’ and its driving rock, we can only be glad that they did, indeed, get weird with us, and hope for a lot more strangeness to come.