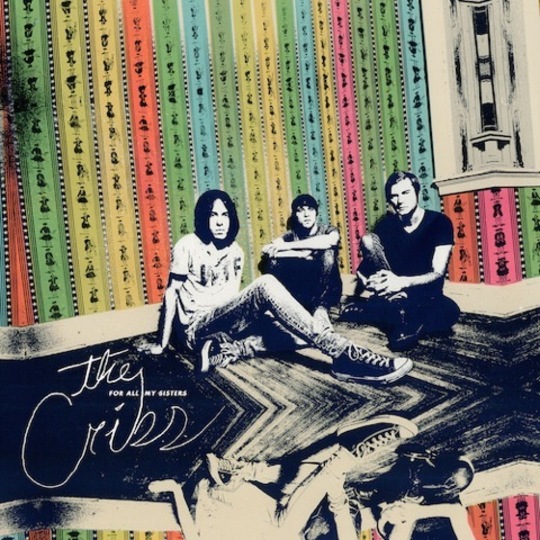 If you like guitar music – and I mean, reaaally like guitar music - then there really aren’t many reasons why you should display even the slightest trace of apathy towards The Cribs. One of the most consistent, prolific and vital bands of the past decade, the Jarman trio have built their strong, DIY-centric reputation by writing the kind of joyful and true-spirited music that continues to dominate indie dancefloors, slay festival tents and set the bar of integrity oh so high for other bands. Shit, they still use a van for touring after all these years – you wouldn’t get that with fellow mid-Noughties indie peer Ricky 'The Voice' Kaiser Chief, would you? No, you just wouldn’t.

This is all necessary hyperbole, of course, because it seems to justify itself with almost every release that Wakefield’s finest put out (both in full-length and single form, as the recent DiS Does Singles list attests); a trend that continues with their excellent sixth studio album, For All My Sisters. Their first release on Sony Red following the amicable break-up of their long-term relationship with Wichita, such a switch doesn’t necessarily mean that The Cribs have finally sold their soul in the chase for $$$ - more, perhaps, that they’ve reached a point in their career where good business decisions can and should be made, and, after so many years of honourable service to the indie cause, they’re perfectly entitled to do just that. So hush.


This overtly-poppy record – the first of two albums to be released by the band in 2015, with a punkier affair (that, rather excitingly, is being produced by Steve Albini) set for later in the year – is packed full of hooks and an immediacy that was somewhat lacking on previous outing In The Belly Of The Brazen Bull (‘Come On, Be A No One’ and ‘Anna’ aside). As such, it’s a welcome return to the endearing, singles-led feel of 2007’s Men’s Needs, Women’s Needs, Whatever that’s characterised by what guitarist Ryan has recently remarked as 'concentrating on the more obvious side of this band: a strong affection for pop music and hooks' – before his bassist brother Gary then rather peculiarly pulled up Martika’s late-Eighties hit ‘Toy Soldiers’ as a point of reference.

But before you go thinking that The Cribs have ditched their amps and trademark brashness in favour of tear-jerking emoti-pop, For All My Sisters cranks up the distortion and punches you square in the face – it’s pop, just not as you might know it. Recorded in New York with The Blue Album producer Ric Ocasek (of The Cars, no less), the 18 songs that they’d written since 2012’s In The Belly… were whittled down to a compact 12, clocking in at just over 45 thrilling minutes. Eleven of the songs are powered by Ryan’s trademark angular style – the only let-off is the everyone-to-the-bar ‘Simple Story’, which depicts a dejected Ryan sighing that he’s “gonna have to be a man someday” – that remind you just how vital an asset he is to the Cribsian ideal of shout-a-long guitar lines and pumping choruses that have so endeared the Yorkshire trio to the indie public.

That aforementioned punch to the noggin first lands as opener ‘Finally Free’ (not from Wichita, surely) cranks into gear, puncturing the serene silence that you’d been enjoying previously with some shrill guitarwork and thrashing cymbals. Breath taken away, you’ve little time to recover before the frankly awesome ‘Different Angle’ marches up to bat. It’s a telling title, as ‘Cheat On Me’-esque riffs wind themselves around Ryan’s fretboard and vocals coo amongst the jumpy tempo: “If you look at me from a different angle, do you see something that you just can’t handle?” Such miserabilia wouldn’t be out of place in Morrissey’s notebook, whilst his old pal Johnny Marr clearly taught The Cribs well during his three-year stint in the band (further evidence, should you need it, that The Cribs are so highly-prized in indie that they once had Johnny bloody Marr on rhythm guitar): his mark is strongly evident on the driving squall of ‘City Storms’, which could have sat very comfortably on the Marr-era Ignore The Ignorant.

Upping the pop ante on the record is the marginally-subtle inclusion of a synth, which makes notable turns on the initially-grungy ‘Mr. Wrong’ and ‘Diamond Girl’ to underpin the punchy impact of their respective choruses. But taking first prize in ‘The Cribs-do-pop-rather-well’ stakes is second single ‘Burning For No One’: one of their best songs in years, it takes on a sing-a-long quality rather than a mosh-until-your-sweat-begins-to-sweat mentality. It’s reminiscent of some of the best hooks on Men’s Needs…, and remains tremendously catchy despite such downcast lyrics - “I’m feeling so eternally grateful now I’ve realised, like a candle on a vacant table being so denied” - that adds further credence to how adept the band are at turning negative lyrical themes into the kind of memorable refrains that you scream out in a fit of drink-informed giddiness (see also ‘Men’s Needs’, ‘Hey Scenesters’, ‘Another Number’).

There is – brace yourself – a misstep or two. Boo, hiss - I know. But ‘Pacific Time’ is a bit of an unremarkable let-down: if you’ve a particularly keen ear for the archetypal Cribs sound, then you can quickly tell from Ross’ relatively-demure drumming here – his usual expressive style so typically the driving force of any good Cribs number – that it’s not going to be a classic. A further case in point is the following track ‘Summer of Chances’, which, whilst testing Gary’s admirable screech to its limit in the chorus, doesn’t particularly go anywhere. SORRY.

Gary recently said that 'punk rock and indie are dead' in defence (or tongue-in-check promotion) of this poppier album, which is surely in for a great shot at being The Cribs’ third straight top-10 set. But really, that’s all rubbish: take a listen to closing track ‘Pink Snow’, the seven-minute epic that shares a similar quiet-loud-quiet-LOUD dynamic to In The Belly…’s convoluted four-in-one closer, which ends up in the same kind of expansive, noisy territory as the soaring ‘Be Safe’ or ‘City of Bugs’. It’s a handy bit of reassurance that, amongst a quite successful dalliance in pop songwriting that might seem suspiciously coincidental with their newfound major label status, feedback and booming drums are still very much the order of the day, which makes it all the more wonderful that The Cribs have managed to interpret the notion of 'pop music' into an often-spectacular record.