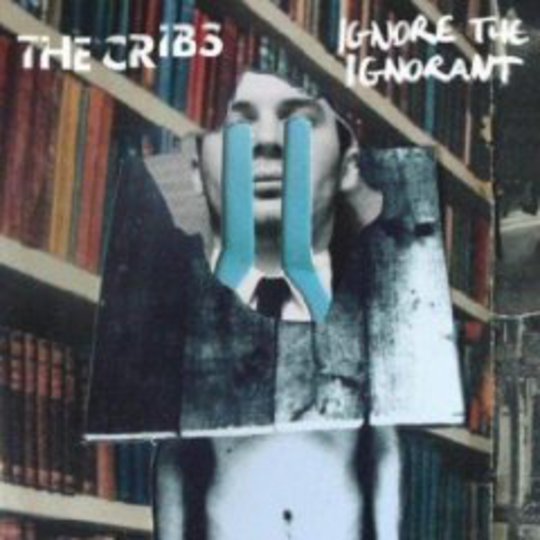 My first exposure to The Cribs was during a Reading 2006 highlights package. Until then I’d lazily filed them with indiebollocks atrocities like The Paddingtons and The Others, and the sight of Ryan Jarman vacantly slurring nonsense in an interview, dressed preposterously in a too-tight ripped polo shirt didn’t challenge my presumptions. "Pricks," I thought. Then they went onstage and snarled through ‘Hey Scenesters!’ with a ferocity that seemed completely at odds with their ‘indieness’, their clothes choices, their carefully-cut hair. My silly prejudices were obliterated.

A few things set them apart. What I’d misread for extreme affectation in the none-more-Yorkshire way the Jarmans addressed the camera turned out to be the opposite; it’s hard to imagine a more honest, straightforward band. It doesn’t hurt that they’re three distinctive looking brothers, a gang, a unit. More important is the fire and tenacity they bring to their music, elevating their songs from mere melodic indie to something to rally behind and care about.

Last summer I saw The Cribs interviewed again at Reading on TV, this time with what looked like their hip uncle in tow. The Jarmans and new member Johnny Marr looked unimaginably drunk and... sorry, yes, that’s NEW MEMBER JOHNNY MARR. It bears repeating because it’s one of the strangest band line-up developments in living memory. A ‘legendary’ dinosaur from 20 years ago becoming a permanent member of a young, vital punky guitar band. It’s the equivalent of Jimmy Page joining Supergrass in 1995. The whole thing seems like a drunken joke, like an old bloke turning up to a party fresh from a shopping spree at Top Shop vintage. It’s now the morning after, he’s still hanging around and no-one’s quite got round to telling him to piss off home.

The Cribs are at their best lo-fi, raw and loose, and with the prodigious Marr on board and beefy production from Nick Launay they’re making a transparent statement about Growing Up with Ignore The Ignorant. Growing Up’s a drag. You do things would appall your younger self, you compromise, you change your mind completely about some things. While that's largely a healthy, natural process for people, the same rules don't apply for bands. ‘We Were Aborted’ begins the Cribs’ fourth album in familiar style, with a pissilly angry title (cf. ‘Our Bovine Public’, ‘Hey Scenesters!’) and a surprisingly joyous song. It’s as if they can’t fully commit to rage, they’re conscious of a duty to entertain and be singalongable. Moribund single ‘Cheat On Me’ follows, a shockingly pedestrian attempt at a mature anthem. It expands slightly after several listens but still really sounds like it could be soundtracking a Homebase advert or a particularly underwhelming goal of the month montage.

There’s a new studied subtlety at work throughout the album, and ‘Cheat On Me''s got some lovely guitar work bubbling under in its chorus, but details like this don't create classics or win hearts. Marr’s guitar adds routine, blanket augmentation to almost every song, possibly revealing something about the quality of this material. On 'Hari Kari' he is needless decoration, painting a pattern that accompanies what's already on the page and making it slightly prettier in a way that’s entirely dispensable. ‘Nothing’ begins with reassuring crunchiness, but then here come Marr’s unnecessary flowery additions again, uninvited. Lyrics about wilful emasculation on ‘Emasculate Me’ come off as a double bluff, as this is some of the blokeiest music The Cribs have made, especially the clumsy stomp of the title track.

There are glimpses of better ideas like the gentle heartbroken ballad 'Save Your Secrets', which hints at The Replacements' drunken volatility as Gary Jarman switches between croon and shredded shouts. ‘Hari Kari’ overcomes its slightly fussy arrangement and fizzy-sounding drums to deliver a righteous coda of “It’s your mind / it’s your voice / it’s your body / it’s your choice”. The epic, Autumnal ‘City Of Bugs’ features a LOL-worthy imitation of Thurston Moore’s stoned croon, but Launay’s expensive-sounding production suits its brooding duelling guitars and military drumbeat. It’s yearning, angry, and somehow kind of uplifting. There aren’t many bands that nail that mood as well as The Cribs.

No-one wants them to recreate their old songs ad infinitum, but the fatal flaw of Ignore The Ignorant is its uninspired melodies. Songs like 'I'm A Realist' from 2007’s Men’s Needs... suggested they had an uncanny gift for build several layers of itchingly great hooks into deceptively straightforward songs. Without that level of charming inspiration we’re left with aimless, sappy niceness like on ‘Last Year’s Snow’. They’re now stuck in a tricky hinterland between the teen thrills of scuzzy guitars and a sort of faux-rebel music for middle managers’ commutes. There’s a constant cloak of restraint on Ignore The Ignorant and that’s patently not a positive thing for a band like The Cribs. It’s all a bit tasteful.

They’re still an incredibly likeable band, unashamed of being rabble-rousing without ever resorting to lowest common denominator tactics, but The Cribs have toned down the things that made them great. There’s no unhinged guttural yells here, no fierce bite, and there’s nothing halfway as inspired as ‘Men’s Needs’ or ‘Mirror Kisses’. If you’re going to shed your past strengths you’d better have a good plan B. Pleasant guitar colour, restrained songs and lush production just aren’t going to cut it.