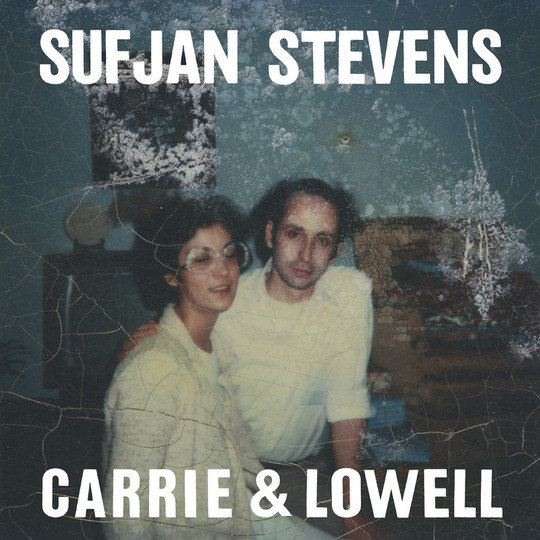 Carrie & Lowell is an incredibly sad record. Listened to in a delicate state, its songs can be harrowing. A friend of mine was brought to tears upon hearing ‘No Shade in the Shadow of the Cross’ on the radio recently, and when I heard it played from start to finish in a crowded bar a couple of weeks ago the effect was jarring (not least because it hasn’t yet been released). Sufjan Stevens has long conveyed great emotion in his music, often married to an admirable, outsized sense of ambition. Here, he strips everything back to its bare minimum, painting a painfully honest depiction of bereavement and the grief and confusion that followed.

The Carrie and Lowell it is named for are his mother and stepfather. Carrie, who battled various illnesses and addictions over the course of her life, died of stomach cancer in December of 2012, while Lowell (whom Stevens calls his “closest fatherly companion”) is now director of Stevens’ record label, Asthmatic Kitty. The pair were married for five years in the early 1980s, during which time an infant Stevens and his siblings made summer visits to see them in Oregon, where they lived. His formative memories of that time - of the Pacific Northwest state and of his mother - form the basis of the album, which he talked about at length in a recent Pitchfork interview that constitutes essential reading for any fan. “It’s not really trying to say anything new, or prove anything, or innovate,” he says of the LP. “It feels artless, which is a good thing. This is not my art project; this is my life.”

Stevens is characteristically frank and sincere in the piece, discussing his relationships with his parents, the spiral into depression brought on by his mother’s death, and his need to “extract [himself] out of this environment of make-believe” built up by his earlier work, all driven by a desire to “pursue a sense of peace and serenity in spite of suffering.”

Peace and serenity are glimpsed over Carrie & Lowell’s eleven songs, though a straight narrative is not. On ‘Should Have Known Better’ fragmented memories are interspersed with suggestions of where Stevens’ headspace lies now, as he nears the end of his 30s. A recollection of his mother leaving him in a video store precipitates an all-consuming grief he likens to a “black shroud,” “the demon,” an “empty feeling.” The past is “a bridge to nowhere.” The song’s finger-picked minor chords are supplanted by brighter shapes and a leavening swell of backing vocals as it shifts gears into a more hopeful back end, regrets tempered by a promise of renewal that Stevens’ four-year-old niece personifies: “The beauty that she brings, illumination.”

Moments like this - or when Stevens recalls how the man that taught him to swim “couldn’t quite say my first name…He called me ‘Subaru’” - are thin on the ground, but crucial in softening the blow of Carrie & Lowell’s more devastating passages. ‘All of Me Wants All of You’ references masturbation, Revelation. ‘Drawn to the Blood’ is coloured by anger and indignation. The guardedly upbeat title track is suffused with vaguely apocalyptic imagery and closes, like several songs here, on a chilly, deliberate swathe of noise. (Sean Carey from Bon Iver plays on the album, and the wintry feel of that group’s music and of Carey’s own is occasionally called to mind.) “There’s blood on that blade,” Stevens observes on ‘No Shade in the Shadow of the Cross’; “Fuck me, I’m falling apart.” The Tillamook Burn forest fires that ravaged Oregon in the first half of the 20th century are cited; figures of Greek myth and scripture are scattered throughout. Desperation is presented on ‘The Only Thing’ as a series of violent, self-harming notions - suicidal thoughts and a sense of worthlessness pervade, yet, on a level that even he professes to find incomprehensible, Stevens’ faith prevails (his delivery of the line “I want to save you from your sorrow” is especially wrenching).

There is beauty in these songs, though, however stark. ‘Fourth of July’ lies at the heart of the LP, an almost unbearably affecting account of his mother’s passing, in which he sings from both his and her perspective. “‘Well you do enough talk / My little hawk, why do you cry?’” he asks himself, taking her voice. Endearments are exchanged. Carrie dispenses advice, expresses sorrow, asks forgiveness. “We’re all gonna die” is a disquieting refrain, but less so when read how he intended: as words of comfort imparted by a dying parent to her son. The tenderness and the love on display - how these emotions are conjured in just a few simple verses - is subtly, quietly overwhelming.

It is notable that Benji by Sun Kil Moon, one of last year’s most powerful and acclaimed albums, contemplates loss and mortality in a similarly direct style. Mark Kozelek never set out to make a record so marked by sadness, though - it just happened to be what was on his mind at the time, something certain songs from his collaborations with Desertshore and Jimmy LaValle of the previous year bear out. Stevens’ approach, to confront and work through his feelings from the outset, distinguishes this record from Benji in a small but significant manner, gracing it specificity and, perhaps, underlining its purpose.

“Now I’m drunk and afraid, wishing the world would go away,” he states on ‘Eugene’. “What’s the point of singing songs / If they’ll never even hear you?” The answer to this question is apparent and perceptible throughout Carrie & Lowell, a collection of songs as captivating, poignant and finally, ultimately, redemptive as any that Stevens has produced.