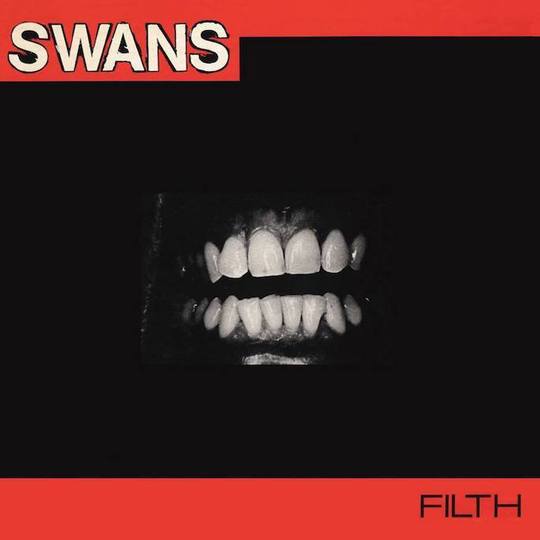 Swans are a band that, more than 30 years into their career, keep getting stronger. This year’s To Be Kind is sure to find itself on a good number of end-of-year lists so now is as good a time as any to go back to the beginning with the first of Mute records’ remastered reissues. Sadly, though, only those of you with record players will get to experience the Filth remaster for now. This does raise the question of the necessity of reissues even more so than usual, especially since there are no bonus tracks here, not even the live recording at The Kitchen, New York that was included on 2000’s double-CD reissue (along with Body to Body, Job to Job). Still, vinyl lovers will at least get some reproduced live posters, and Swans are a fascinating enough band that it’s worth delving into their back catalogue.

So on to the music itself. As with pretty much all reissues one can only really review the original album. Obviously changes have crept into their sound after all this time but Swans have never really compromised on the sheer intensity displayed here on their first full-length. The album follows a fairly consistent pattern. Singer and sole constant member Michael Gira lays down grinding, repetitive basslines on every track, backed by twin drummers whose pulverising assault doesn’t so much keep time as obliterate it. The guitars are mostly textural decoration, except that the texture is almost always a riotous slab of noise. Only the use of tape manipulation, such as on interesting experiment ‘Freak’, and some flirtations with what sounds like musique concrète provide a let-up from the ceaseless onslaught.

The best thing about Swans, and especially early Swans, is their sheer nihilism. Many bands have tried to make music that is intense or angry or ugly, but Swans are the band who essentially perfected this, and all without resorting to comical death metal-style posturing. If anything, Filth’s success in this area, and its relentless singularity of tone, can be somewhat exhausting, despite the album’s relatively modest runtime. It’s also difficult to single out any particular track for praise; the album is probably best considered as a whole, a project all of its own. Having said that some moments do manage to stick out of the milieu: the elements of ‘Big Strong Boss’ and ‘Thank You’ that call to mind early Killing Joke, for example, or the 'melody' of ‘Power for Power’ that bears a passing resemblance, incredibly, to Portishead’s ‘Sour Times’. Listening to this makes you realise the band should be praised for the subtlety and nuanced dynamics they’ve allowed into their sound since their reformation.

Filth is also of some interest as a history lesson, as well as an exercise in aural assault. On this record one can really hear Swans’ place in the New York No-Wave scene and, as the only band from that era to still be kicking around, both the album and the band provide an interesting insight into the history of experimental music. It’s difficult to listen to the album and not think that, oh let’s say Shellac, would not exist if it weren’t for Swans.

The reason Swans are the only No-Wave band to still be making music is largely due to Gira’s sheer force of personality, and he is on fine form here, delivering endless lyrics about pain, suffering, control, power etc. in an angry and downright frightening growl. One could look at the lyric sheet for Filth and giggle at what sometimes sound like adolescent rage - “burn my face/ this smells sour” runs one particularly charming couplet - but it’s to Gira’s credit that it doesn’t sound silly in context. The guy clearly believes 100 percent in what he’s singing about.

This reissue, then. Despite the timely reassessment of Swans’ back catalogue it’s pretty much entirely pointless if you don’t own a record player. However, if you do and are a fan of noisy boundary-destroying rock then Filth is absolutely worth adding to your vinyl collection.