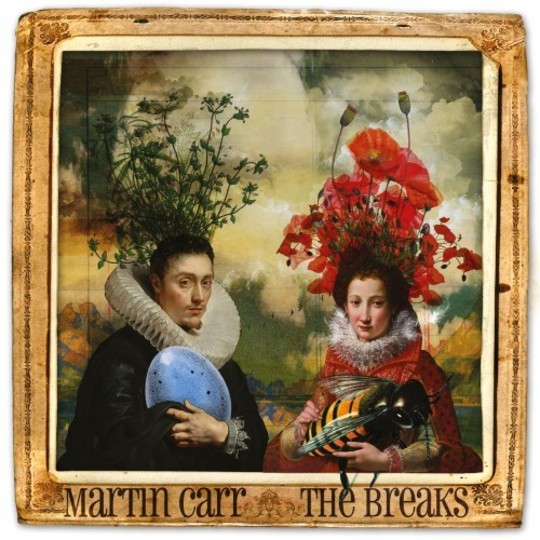 Martin Carr knows his pop onions, that’s for sure. Across nearly 20 albums as both lead Boo Radley and a solo performer he’s done the lot, been wilfully commercial, wilfully noncommercial, retro, futuristic, introvert, extrovert and everything between. While much of his catalogue has felt deliberately undercooked or lo-fi, particularly in his Bravecaptain guise, he’s always been a true student of the pop chorus, schooled in vintage soul, new wave and The Beatles. The Breaks his first proper solo album in quite some time, is probably his most accessibly ‘pop’ record since the Boo Radley’s bulldozed Radio 1 with ‘Wake Up Boo!’ some two decades previous, and like that masterful earworm it does its job well.

While nothing here is earth shattering, especially original or remotely cool (as the kids of today would understand it) the whole thing is, start to finish, immensely satisfying. There’s a lifetime of careful listening on show here, allowing Carr to play around with proper breezy Marvin Gayeisms on opener ‘The Santa Fe Skyway’ and follow it up with the lemonade-guzzling Elvis Costello pop of ‘St Peter In Chains.’ For a man who once made of pointing of saying he didn’t idolise Paul Weller like his Britpop contemporaries there’s a lot of late Jam and Style Council in evidence here, especially on the soul-boy kickback of ‘Mountains’, and the hammond flecked ‘Mandy Get Your Mello On.’

Carr’s sense for wit is very much intact here, “if Jesus ran our chip shop all our fish would be free” he sings on the skiffley ‘No Money In My Pocket’, while a barely-concealed and wonderfully vicious attack on attention-obsessed uber troll Katie Hopkins is rather brilliantly titled ‘Senseless Apprentice’ – any man who can torture a pun until it welds reality-TV-oxygen-thieves to the title of uncompromising Nirvana tracks is okay in our books.

There’s something connecting the generation of artists who survived on the second rung of Nineties indie success- former Bluetone Mark Morris has it, Martin Rossiter from Gene has it, Gaz Coombes off of Supergrass has it- they were raised in an era when pop meant guitars, got their indier-than-thou cred from the Eighties, learned to make bonafide pop hits in their heyday, rejected them, rebuilt them and have gone on to make some sort of peace with all of it. They mastered making pop songs when it was okay to be witty and you were encouraged to whack a massive chorus in the middle, then spent the next few years unlearning that instinct before realising it was okay to do it after all. It makes them all well-rounded craftsmen who make good records by instinct.

In truth there’s not a great deal to say about The Breaks. It neither needs nor wants close examination, it just requires your enjoyment. It deserves that attention too - no worlds will be changed, nor hearts broken here, but every spinners a winner and every cut hits its mark with skill. Solidly crafted and splendidly written.