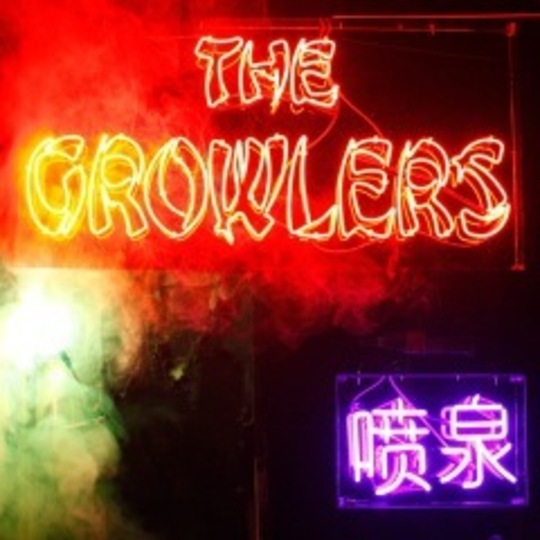 Dana Point, California’s The Growlers have earned themselves something of a reputation in cultish circles, particularly in the States, since their initial self-released EPs back in 2008. Self-identifying as 'beach goth', a genre they seem to have conjured with their tongues planted in their collective cheek, they garnered a rep for drunken, ostentatious live shows (such as their own Beach Goth Party mini-fest) and predictably lo-fi, retro-hugging recordings.

Picked up by the ever-eclectic Fat Cat in the UK for last year’s Hung At Heart, a record more upbeat, or at least lighter in tone than this offering, they’ve chosen to take a step up in terms of production and recording quality for Chinese Fountain, perhaps the one thing of value they may have taken from an abandoned recording session with Dan Auerbach on an early version of Hung…

This shift towards musical clarity certainly gives the band a better shot at a wider listening audience and in this instance the quirk that is almost guaranteed to be lost when such changes are made seems to be a pitfall that has been largely and happily avoided.

Melodically, and particularly in the slaloming vocals of Brooks Nielsen, their new aesthetic allows them the opportunity to be viewed, perhaps as the laid back Cali-cousins to the more frenetic, uptight New Yorkisms of vintage era Strokes. This is in best evidence on ‘Black Memories’, a minimal surf strut with a classic early rock n roll structure, direct pleas from Nielsen (“Where are you going? Come back with my heart!”) and while it, like many of the songs here, deal with the classic girl done me wrong scenario it’s sweet, brief stuff that charms even as it doles out the clichés.

The soft reggae (no, wait, come back!) of ‘Dull Boy’ is draped with a haunting vocal line, a meditation on memory and modernity that towers over its thematic counterpart, the title track ‘Chinese Fountain’, which offers a post-disco shoulder shrug and knowing lines like “techno so shitty even disco seems punk”. Unfortunately the latter tune is saddled with flabby finger waving embodied by the couplet “The internet is bigger than Jesus and John Lennon / and nobody wants to know where we’re heading”. A scrabbling little solo just about rescues this semi-pastiche.

There are nods from guitarist Matt Taylor to Johnny Marr’s most Fifties fixated Smiths jangles on ‘Magnificent Sadness’ (weighed down by a dodgy little line about “downright whores”) and opener ‘Big Toe’ (sadly also home to an offhand reference to “a cold bitch”) and a look back to their more psychedelic days on ‘Not the Man’, yet it’s on ‘Going Gets Tough’ that Nielsen finds a philosophical furrow to truly mine successfully noting that “worry’s a bully that just won’t let me be” as he picks apart a life of work, booze and disappointment that can be rescued with the assurance that “the labour of love will reward us soon enough”. It’s actually very beautiful and for a band that occasionally seems to be skilfully having fun or regurgitating tropes of the past to entertain themselves it’s a pleasing little revelation.

You’ll find nothing here that matches the acoustic rattle of Hot Tropic’s ‘Graveyard’s Full’ yet at the same time you won’t find the sort of songs that blighted the drugged, dare we say Doorsy Are You In Or Out – a mixed blessing all told.

There are delights to be discovered here for fans of Mac DeMarco’s grinning sleaze, the reedy pop of Best Coast and the straight up tunefulness of the UK’s largely overlooked Weird Dreams and it is clear that The Growlers, when not obsessing over gimmicks and borrowed tropes, are perfectly capable of graduating to become a great, insightful pop band. Sorry, beach goth band.