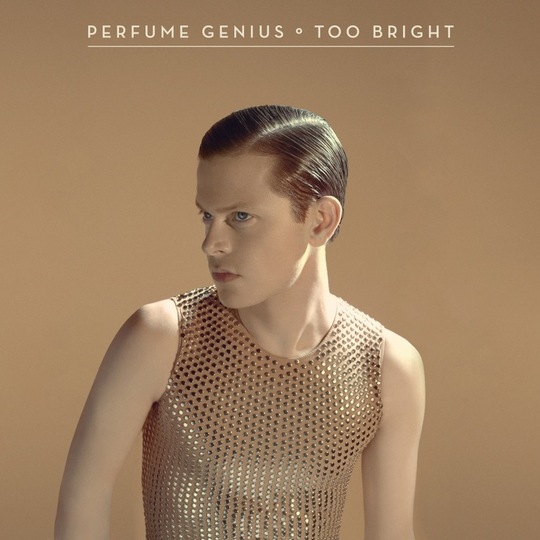 We knew Mike Hadreas, better known by his fragrant alter-ego Perfume Genius, was good but we didn’t realise just how good he was. It’s possible he didn’t know himself. His first two albums delivered consistently gorgeous, melancholic pianoy-acoustic ballads floating somewhere between Rufus Wainright and a sombre Flaming Lips which, make no bones about it, were very good, especially on Put Your Back N 2 It; but with Too Bright he’s taken one of those occasional steps up an artist makes, the ones that make you stand back, clap in delight and say 'oh, NOW I get it.' Ironically, it’s when he moves away from the simpler structures of his earlier work, into the richer more complex feast we have here, that you start to see the kind of artist he is. The darkness was always there, in Hadreas, in the songs, but now it’s in the music, Too Bright, to sound ridiculously over the top, has darkness in its soul.

For the short intake of breathe of opener ‘I Decline’ it’s business as usual: melancholic, hangover friendly made-under piano balladeering. It’s pretty and a bit miserable, and it’s what you’ve been trained to expect. Maybe Hadreas wanted to start somewhere familiar, or maybe he just wanted us settled before he pulled the rug, because once lead single ‘Queen’ kicks in something very different starts to creep out.

For a start ‘Queen’ has a pop heart; much of Too Bright does actually - there’s something of Sam Smith’s soulboy popularisms right at the centre of it, but every time we taste the sugar we quickly get a sense of something sharper and less immediately palatable underneath it. Bitters, sours, richness, manifesting themselves through wobbling, stomach clenching bass synths and clattering, minimal percussion.


One of the best used tricks here is Hadreas’s tendency to reverse the verse/chorus standard. ‘Fool’ sounds like the quintessential modern pop hit for its opening minute, the vocal rises over a funky, loose bass part that Patrick Wolf wouldn’t kick out of bed in his weirder electro pop fantasies. It’s sexy, and then it’s gone. In place of a chorus the song degrades into dark, minimal synths, like someones holding a Blade Runner-themed funeral with this the disco afterwards, dragging your heart through a cyberspace meltdown, before reinflating the funk at the point you probably couldn’t take it anymore. ‘My Body’ pulls the same trick with a minimal but urgently catchy Arcade-Fire-like groove which sickens into a “chorus” of droning bass synths. ‘Grid’, probably the best thing here, overlays its bed of spiralling synths and spartan arrangements with the sound of screaming.

There’s a woozy, dreamlike spirit here as well. ‘I’m A Mother’ is a dissolving waltz, its melody sunk into washes and waves, its vocal barely more than a whimper in the whirlpool. The title track borrows something from both Antony Hegarty and Thom Yorke in its fundamentally miserable vocal, it sounds so lonely and resigned, but also so lovely.

All of this is just externalising the very raw feelings of its creator. Hadreas is livid, bruised, hurt, furious and terrified all at once, though it’s the sheer fury that seems to capture the lyrics most often, sarcastically internalised but actually reflecting far more on those around him, the homophobic and the judgmental. On ‘Queen’ he’s a monster, “diseased” and “no family is safe when I sashay”, on ‘Don’t Let Them In’ he’s “trapped in my body”, on the sparse soul of ‘No Good’ he’s ”all used up”. These are not the musings of a happy man, yet in Too Bright he has found the perfect vehicle for those feelings. It makes his pain beautiful. ”Deep down I never did feel right” he sings on ‘All Along’, ”I need you to listen” and we have. We did. We will.