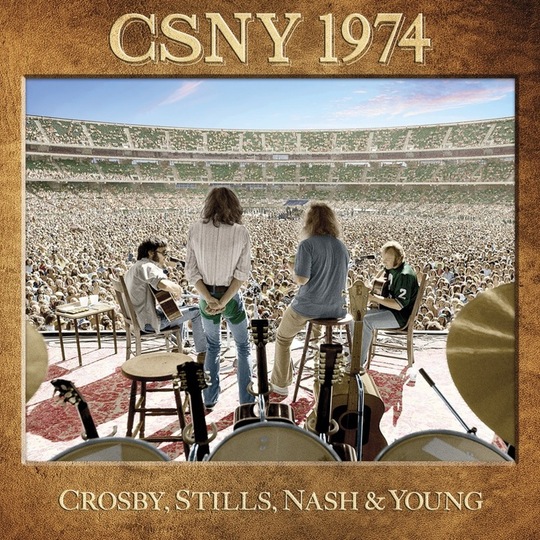 When something is known in rock mythology as ‘The Doom Tour’, it's a touch surprising that anyone would want to remember it 40 years on, never mind release a commemorative box set. But then Crosby, Stills, Nash & Young’s 1974 tour didn’t earn that epithet for any musical reasons.

It has become infamous in the years since due to the scale, excess and extravagance involved. Drugs, dodgy dealings and hangers-on surrounded CSNY, who were reconvening after a four-year break to cash in on their continued success by performing to what were then the biggest crowds ever seen at a rock concert. The particular circumstances which surrounded CSNY in 1974 are captured brilliantly in the accompanying series of oral recollections, which gives a sense not only of the huge scale the band were operating on but also how this time still plays a major part in their relationships today. It also contains some excellent anecdotes about Stephen Stills insulting some of the finest musicians in the world whilst off his face, which are always worth reading.

Forty years on, it seems that CSNY – and Graham Nash in particular – are keen to redress the balance, and show that away from all the shenanigans they still pulled off some great performances on this tour. The band regularly played for over four hours, with set lists drawing from the catalogues of all four songwriters, and were probably at the height of their powers in this set up, Neil Young’s idiosyncratic presence clashing with the sweet peace and love espoused by the others.

In order to prove that CSNY in 1974 wasn’t just a money-spinner, Nash has spent a long time in the producer’s chair, piecing together recordings fto create this lavish collection. It’s available as one single-disc live album, which pulls together 11 of the most famous CSNY tracks, but there’s much more interesting stuff in the full fat, director’s cut, extended edition box set. Forty tracks, plus a bonus DVD showing rare video footage dug up from the period, and a snazzy booklet, add up to a weighty piece of soft-rock archaeology.

Its aim is to present an idealised mirror of a show from the tour, and it certainly delivers in giving a sense of the scale of these CSNY performances. As the band go from electric to acoustic, dancing in and out of their songbooks before returning to their electric guitars for a stirring finish, it’s hard to not be impressed by the range they fire through. There are certainly moments where you feel the need to escape to the bar as another track extends into a lengthy jam, but if they wanted to capture the essence of a Seventies supergroup, that’s all part of the journey.

Nash in particular come across well, his contributions adding some light to the shade supplied by his counterparts. They might have become slightly cheesy ad staples today, but ‘Our House’ and ‘Teach Your Children’ have their bright-eyed optimism restored here, delicate harmonies adding touches of colour to Nash’s confident delivery. Of the rarities, Nash’s ‘Fieldworker’ is also one of the most interesting additions, a character study performed solo over pounding piano chords. ‘Military Madness’, from his underrated Songs For Beginners LP, also stands the test of time, a powerful autobiographical statement that avoids the more overt flower-power tinges that can taint the band elsewhere.

At the time of the tour, Neil Young was at an interesting place in his career – he’d hit the heights of Harvestand After The Goldrush, but had also infuriated the audience he’d won over with several more left-field recordings. Here, he’s on the cusp of releasing On The Beach, now seen as a masterpiece by his fans, but it’s fascinating to hear just out of place those tracks seem amongst the CSN material. Following ‘Grave Concern’, an upbeat Nash number, Young leads the band into ‘On The Beach’, and it’s as if a huge grey cloud has drifted over the stadium. Young’s sluggish, chugging chords and high, spaced-out vocals are at odds with everything that surrounds them, but magnificently so. Stills adds some flashes of rock bombast to the background before he and Young trade explosive solos, and you can almost picture the audience struggling to assess what they’ve just seen, and how it’s supposed to fit with everything else they’ve been listening to. It’s glorious stuff, made even better by the fact that it’s followed by the turgid blues stomp of ‘Black Queen’, Stills over-egging an already pretty stodgy pudding.

There’s rarities from Young as well, but they’re more from the crowd-pleasing end of his spectrum. ‘Traces’ is a pleasant country-rocker, ‘Love/Art Blues’ could be a sober take from Tonight’s The Night, while 'Hawaiian Sunrise’ is a fine showcase for the harmonies all four could bring to the table. Well known to Young aficionados, they’re excellent at painting a picture of where the Canadian was at this moment in time, caught between the dark thoughts of On The Beach and Tonight’s The Night, and the lighter shades later revealed on Long May You Runand Comes A Time.

Indeed, the finest thing that CSNY 1974 does is serve as a clear snapshot of this band at this extraordinary moment in their lives. It captures the musical excess of the era perfectly (at one point Crosby exclaims ‘don’t worry, we’ve got a couple of hours to go yet!’ and is greeted with wild cheers), and showcases how the four of them had grown in different directions since they’d first come together a few years earlier. Crosby is still the wild hippy, one minute breaking your heart with ‘Guinevere’, the next boring you senseless with ‘Almost Cut My Hair’. Stills is the musical bedrock who penned some of the group’s finest moments, but whose solo material seems the most dated to today’s ears. Alongside Nash’s simple but affecting material and Young’s more exploratory musings, it all comes together as ample evidence that CSNY were a real phenomenon.