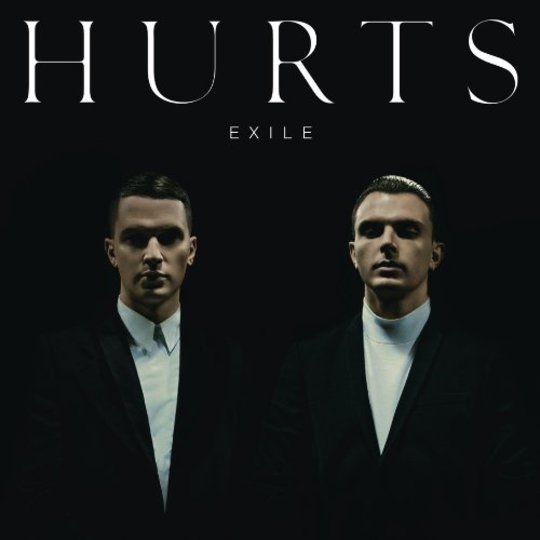 When Thom Yorke wailed “ambition makes you look pretty ugly” back in 1997 you suspect Adam Anderson and Theo Hutchcraft were not taking notes. Bedecked in razor-sharp suits and sporting cheekbones with angles a mountaineer would struggle to overcome, the core components of Hurts – a Manchester-based synthpop pairing with a predilection for grandiose musical symbolism – place stiff emphasis on delivering the aesthetic of aspiration. Ugly they ain't.

What they are depends on where you stand on darkly-veiled, sky scraping pop tunes. For some, their debut longplayer, 2010’s Happiness, was ablaze with stylish (of course) slabs of austere melodies and rousing, neck hair-quivering choruses. Others were not so complimentary. To the naysayers, it was Eighties pastiche carried out by a pair of Bros lookalikes in awe of the New Romantics, but unable to conjure up the substance required to carry it off.

Exile will do little to change mindsets on either side of this divide. These 12 cuts are essentially a souped-up extension of their predecessors. If Apple’s marketing department had got its hands on it, they’d probably have stuck an extra ‘S’ on the end of Happiness and accentuated the subtle tweaks that allows existing consumer products to be repackaged as a game changer. Something Exile certainly is not.

Instead, this is an album that maintains the joyless musical brand Hutchcraft and Anderson crystallised with their two million (TWO MILLION) selling debut. The totemic choruses that light up the clichéd-ridden melancholy of ‘Cupid’ are all in check; while the effete boy band styling of tracks like ‘Mercy” and the abysmal 'Somebody To Die For' continue to be cloaked with industrial synths and metallic guitar lines that suggest there’s something more macabre, more intriguing at work here. There isn’t.

What there is, is a lot of volume. At times it’s a flat track bully, overwhelming the listener with towering stacks of percussion and synthesizers, with the occasional smattering of brass, piano or a gospel choir thrown in to mix it up a little. Yet this hit ‘em hard approach rarely works. The dark disco beat of ‘Only You’ belts out like an Enrique Iglesias-inspired Eurovision entry, while ‘Mercy’s orchestral writhes and ominous trumpet parps congregate as an anti-climatic swell bereft of hook or belief.

This lack of conviction is an ever-occurring issue. Each hackneyed narrative is more likely to have been crafted through a random Emo lyric generator than Hutchcraft’s black and broken heart. The elegant and atmospherically charged ‘The Crow’, for instance, is permanently scarred by his croaky cries of “Cold heart, warm gun, a dying sun”, and ‘Somebody To Die For’s talk of letting “the Devil know I was brave enough to die” could make even the moodiest, most mascara-caked 14 year-old baulk.

But given its creators, it’s hardly surprising to find Exile lacking in depth. Substance isn’t a ballpark Anderson and Hutchcraft have any intention of playing in. These big, slick slabs of black ice pop will wallpaper every tear-jerking vampire flick or poignant sporting moment that matters over the next two years. And once its teat has been milked, they’ll do it again. And again. Because for a band like Hurts ambition isn’t ugly - it’s profitable.