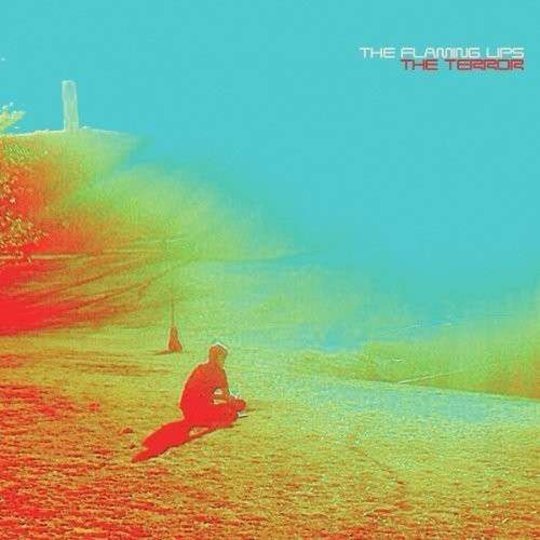 Over the past year or so, Wayne Coyne seemed to be going out of his way to lose his title of indie-rock’s jovial eccentric uncle. If he wasn’t having a spat with Erykah Badu or trying to carry a grenade onto a plane, he was leading his band into some misguided musical projects (Heady Fwends, Pink Floyd cover albums, etc…), all seemingly designed to make us forget the oceans of love that his band have built up since The Soft Bulletin.

Thankfully, The Terror has arrived, to remind us that Coyne and The Flaming Lips are a musical act rather than a circus act –and a bloody good one at that. A brave, difficult and experimental album, The Terror reminds us that there’s more to this band than glitter bombs and dancing bears.

Of course, The Flaming Lips have always been brave and experimental, but a beating pop heart has been present throughout. That heart is still here on The Terror, but it’s buried deep under atonal hums, abrasive drums and throbbing synths, only revealing itself at a glacial pace after numerous listens.

Embryonic, the band’s previous full studio album, cast aside the euphoric psychedelia that had become band’s signature sound in favour of a more adventurous journey, and that journey continues into deeper territory here, typified by the epic scope of ‘You Lust’. Thirteen minutes of a minimalist Joy Division-esque motif backed by a disquieting hum, only broken by Coyne’s harsh whisper of a refrain. It’s a difficult listen, but a powerful one.

Next to that, the preceeding ‘Try To Explain’ seems as instant as ‘Do You Realize??’ despite its own similarly sparse nature. Aural jets slowly spiral into space behind Coyne’s heavenly vocals, rising towards a stately, rousing chorus – it’s a wonderful track, made all the more powerful for the brutal surroundings it finds itself in. The album was apparently put together in just a couple of night time recording sessions in between other band projects, and this track seems to suggest such an environment best, sounding like it was put together in the wee small hours in a moment of weary realisation.

Lyrically, Coyne flits between his trademark optimism and some darker moments (it’s not called The Terror for nothing) that hint at a mounting political disquiet. The band have never shied away from voicing their beliefs – ‘The Yeah Yeah Yeah Song’ is one of the most obvious political pop songs of recent years – but rather than just angry lashes towards authority, here his concerns seem a little more desolate. The sparse hum of ‘You Are Alone’ is populated by Coyne’s disquieting falsetto seemingly searching for companionship but ultimately failing to connect, while the nursery rhyme melody of ‘Turning Violent’ takes a few simple lines and slowly builds them into something almost threatening.

For anyone only familiar with The Flaming Lips of festival sets and pink robots, The Terror is a truly disquieting listen, rootless and lacking in any of the day-glo sparkle that the band has traded on so successfully. Even if you are a fan of the record, it's not something that you’re going to listen to repeatedly or stick on at a party. However, after it burrows its way under your skin, The Terror does genuinely feel like something of a dark masterpiece, the album you’ll stick on to discredit anyone who tries to claim The Flaming Lips are lacking in depth or darkness.