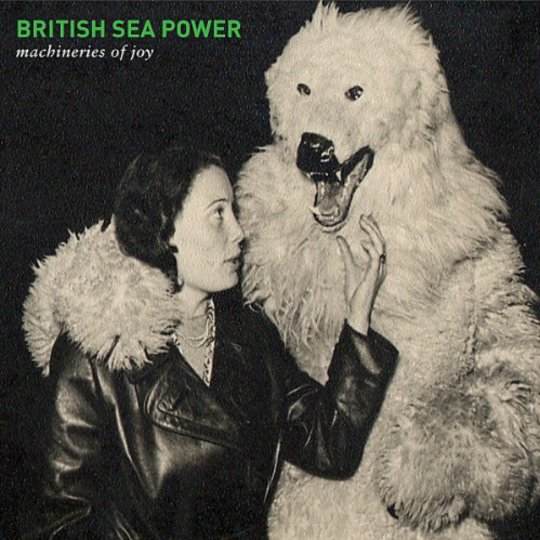 Judging by the release schedule shared by their mid-Noughties indie counterparts, British Sea Power should be shoving out a greatest hits compilation in lieu of Machineries of Joy. At the very least, they could have spent their summer bathing in the royalties a tenth anniversary edition of The Decline of British Sea Power would have spawned. Perhaps... if they did a commemorative tour to go alongside the hurried remastering job. This is how established bands who still make the 6Music playlist earn a living nowadays.

Instead, British Sea Power have avoided the existential Don’t Look Back crisis that kicks in after a decade of mid-afternoon festival slots and made an album filled with 10 brand new songs. Going so far as to applaud the Brighton-based collective for this negligible achievement would be the act of a complete arse hat. Bands are supposed to make new albums; why bother if you can't better your last one. Especially when that ‘last one’ was the swiftly forgotten Valhalla Dancehall.

Machineries of Joy is an improvement on its predecessor but far from a dramatic leap forward. With British Sea Power, there's long been a yawning gap between their outward eccentricities and the amount of 'weird' they lay down on an album. Man of Aran excepted, it's difficult to point out a moment when they've genuinely confounded expectations. Naming a track 'Monsters of Sunderland' is barely enough to raise an arched eyebrow after five albums of pleasant anthemics. At this point in time, it seems unlikely Scott Wilkinson and co will bother to invest the necessary effort to shake their perception as a quirky, inoffensive collective.

Accepting British Sea Power for the band they are, instead of the band you’d like them to be, Machineries of Joy will make do. Its ever-reliable recipe of swooping guitars and soaring vocals always goes down well at a time of year beset by torrid weather and overdue council tax bills. Similarly to Do You Like Rock Music?, you can sit back, switch off and escape in this album without having to worry whether a rowdy key change will upset the calm. ‘Loving Animals’ veers closest to subversion with its teasing mix of chugging chords and a naughty chorus, “Loving animals. Loving animals. I want you to know it’s wrong man.” The LP’s self-titled lead single is another highlight, slickly shifting gears from a metronomic Neu!-like intro to a plaintive tale of enduring affection marked by shimmering chords strummed extra slow. ‘What You Need The Most’ and ‘Radio Goddard’ are more pedestrian, although pleasant enough to linger tentatively in the memory.

That Machineries of Joy sounds so contented is its Achilles’ heel. BSP are audibly putting their feet up and asking you to stick the kettle on. Why not pour yourself a whisky and head out instead?