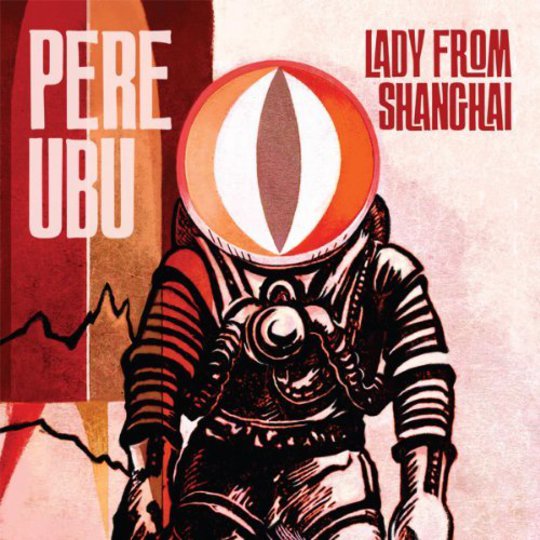 Thirty-five years on from their debut, post-punk oddballs Pere Ubu are still enraptured by the off kilter. Granted, no-one was ever expecting collaborations with Donny Osmond, but it is generally a given for people to mellow somewhat with age. The Lady From Shanghai is by no means mellow; a cacophonous, eerie and uncompromising record, it is nonetheless a rewarding one - even if the rewards are on occasion slightly disturbing. The album, composed through largely improvisational and experimental techniques, has its inspiration drawn from the game of Chinese Whispers according to the album’s accompanying book; as such, the tracks featured are distorted and manipulated, musical ideas and phrases toyed with until they twist firmly out of the ordinary and into Pere Ubu’s bizarre field.

Opening The Lady From Shanghai’s is ‘Thanks’. Hypnotic, tribal rhythms pummel away as singer David Thomas wails “You can go to hell” to the tune of Anita Ward’s ‘Ring My Bell’, the combination of which is both strangely alluring and irritatingly monotonous; there is virtually no deviation on this throughout the track’s entirety. However, less repetitive fare is found immediately after on the fractured, bizarre ‘Free White’. The track rollicks along relentlessly, with an insistent groove binding proceedings together and a frequent guitar motif adding a lingering sense of disquiet throughout. "I didn’t want to spoil your party…" sings Thomas, the lyrics and music challenging the hegemony of popular music through their antagonism.

And it is this slightly antagonistic tone that keeps the interest. The intensity of the backing is juxtaposed by lyrics such as “Won’t you come out to play with me Mandy/ Won’t you come out to play…’ ; the drums pummel, the organ brutally stabs and Paul Thomas adopts a nightmarish vocal style throughout the album, the band overtly challenging the listener. This comes to a head at the mid point of the album, with the tracks ‘And Then Nothing Happened’ and ‘Musicians Are Scum’. The former track has a mid-section that comprises mainly of a distorted siren with brutal duration, the latter a brilliant, fidgety mess of unhinged melancholy.

It is records like this that cements Pere Ubu’s reputation as one of the leading innovators of the post-punk genre and one of the finest underground bands out there. Although this is a far cry from the standard of their late Seventies heyday, the band have continued down their obscure path with little deviation, creating a sound which, although challenging and on occasion elitist, is there own. In a similar way to such cult bands as The Fall (with whom they share a similarly ludicrous amount of lineup changes), Pere Ubu have earned themselves almost unshakeable credibility.