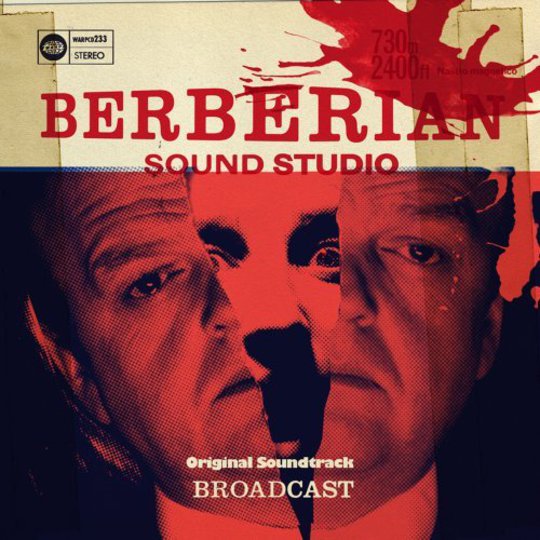 In 1976, twitchy British sound engineer Gilderoy gets hired to create the audio effects for an Italian art movie. At least that’s what he thinks until he discovers he’s working for Santini, a giallo horror director with a CV like a morgue floor. Locked away in a recording booth surrounded by tape recorders and screaming women, Gilderoy recreates the sounds of dismembered bodies by hacking up watermelons and slowly losing his marbles. That, in a nutshell, is the plot to Berberian Sound Studio, Peter Strickland’s second film and Broadcast’s first feature soundtrack, appearance in Austin Powers notwithstanding.

Originally tasked with writing stings for The Equestrian Vortex, Berberian Sound Studio’s film within a film, James Cargill and the late Trish Keenan’s luscious miasma soon spread to the entire picture, Strickland capitalising on their knack for eerie, intriguing electronica. In fact 'eerie' barely touches it: ‘Found Scalded, Found Drowned’ is sixty seconds of elongated, tortured guitar notes, while ‘The Equestrian Vortex’ builds suspense from bashed cymbals and frantic, stumbling piano, like someone putting a curse on the Get Carter soundtrack. At a minute and half it’s one of the longer tracks on the album - 39 cuts in 39 minutes - but it’s a national anthem compared to some of the other dark snippets, or the disturbing excerpts of whispered Italian dialogue.

Berberian Sound Studio has another side, showing off a gentler, more mind-boggling cocktail of noises like Bagpuss meets Event Horizon. ‘Beautiful Hair’ makes use of freaked-out harpsichord that recalls Broadcast’s collaboration with The Focus Group, while the intimate ‘Teresa, Lark of Ascension’ creates harmonies from soprano voices and glistening glass bells; one of the album’s few moments of true bliss. Both offer respite from the cycle of terrifying sound effects, exploring simple, more innocent melodies like ‘Teresa’s Song (Sorrow)’ with its Grouper-like fuzziness.

Berberian Sound Studio’s careful alternating of ambience/evil church organs/screaming is a surefire way to keep people intrigued, and means curious listeners should indulge some of the more crazy material like ‘A Goblin’ and its 35-second gargle. Though the last ten tracks are built from the same melody - this is a soundtrack album, after all - the feeling of nostalgic evil never wanes, like a Satanic Boards of Canada. As extraordinary and original as the film itself, Berberian Sound Studio is both a bona fide film score and consistent electronica album, and in the wake of Trish Keenan’s tragic death carries the very real air of a requiem.