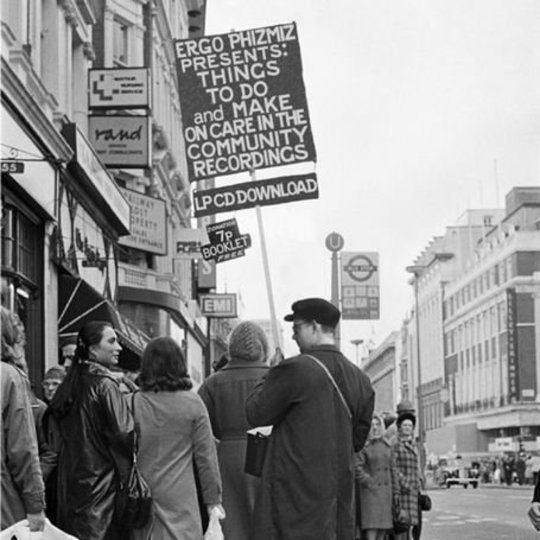 If only every band or solo artist who has scrabbled and clawed their way up piles of column inches to teeter precariously at the top of festival bills on the strength of one measly album had a back catalogue to rival Ergo Phizmiz. Although now releasing what is, technically, his first solo collection of original songs, in the unlikely event that Mr Phizmiz should suddenly find himself headlining one of the summer’s remaining events, he’d have no reason to fear a lack of material resulting in his set petering out around the 40-minute mark. Faced with a restless crowd and the threat of a lukewarm shower of the £3.50 a pint variety, the man whose parents most probably didn’t bless with the name Ergo could just look back at his decade-long recording career and pluck out the many sound collages he created for Radio 3 or Resonance, snippets of his installation work or one of his collaborations with fellow plunderphonics whizz People Like Us. He could throw in TV and radio themes or a crowd-pleasing cover version: maybe a cut from 2003’s Ergo Phizmiz & his Orchestra Plays Aphex Twin or this year’s solo acoustic reworking of Prodigy’s Music for the Jilted Generation would do the trick. And for an encore? Well, there’s always The Faust Cycle, three years in the making and currently available free from the netlabel Headphonica. That should fill in a spare 15 hours or so.

Yet whilst the 11 songs on Things to Do and Make obviously spring from the same prolific mind as all of the above, they travel light. If you’re new to this Phizmiz business, then fear not: getting to grips with such a densely wriggling mass of previous material is less of a concern than finding out if you can stomach an opening track that seems to have donned a dinner jacket, spats and waxed moustache for a bet. There’s no getting away from the fact that ‘Busby Berkley’ sounds unsettlingly like The Ukulele Orchestra of Great Britain, with its jaunty strums and raised-eyebrow crooning, but closer listening suggests said ensemble desperately trying to maintain stiff upper lips on finding someone has been playing Burroughsian cut-ups with their lyric sheet, as a reverie about Ginger Rogers and Darjeeling warps into something altogether less dignified.

Of course, Phizmiz is by no means the first to notice the gleam of manic surrealism lurking behind the monocle of buttoned-up British propriety. The most obvious forebears to the strong vein of psych-pop play running through Things to Do and Make are Sixties art-school surrealists such as Syd Barrett and The Bonzo Dog Doo-Dah Band. There’s a similar feeling of messing around with rhymes and seeing what images arise, of word associations being pushed until they either throw up a startling image or collapse in a heap of giggling, Monty Python-reciting sixth-formers. ‘Fairy Chewbacca’ paints an unsettling portrait of unhinged couch potato-dom, Phizmiz intoning “dance with the poodle put the sausage in the strudel and the giblets up the noodle with the kipper and cod” in the kind of dazed, offhand manner that might have Ariel Pink suggesting he should get out for some fresh air. But what to make of ‘The Dapper Transvestite’ pulling up his stockings, or the narrator charmed by the subject of ‘Mandrill’ – “he was mauvish in the chops / and delicious”?

Yet even if such lyrical whimsy fails to float your (beautiful, pea-green) boat, their musical settings reveal an ear practised in making the magical brush shoulders with the mundane, with harpsichords, waltzing typewriters and cuckoos spliced in amidst the guitars, accordions and buzzing synths. And ‘Late’ plays it straight enough to suggest that a sideline in penning Robyn Hitchcock-esque love songs could be another string to Phizmiz’s multi-dimensional bow. Then again, why would he want to do that, when he could be writing an opera imagining the death of DJ Chris Evans? Things to Do and Make may not be propelling Phizmiz to the top festival slots anytime soon, but if it draws a few new followers back with him to a world where 15-hour sound collages and ukulele covers of ‘Voodoo People’ rule the airwaves, then that’s success.