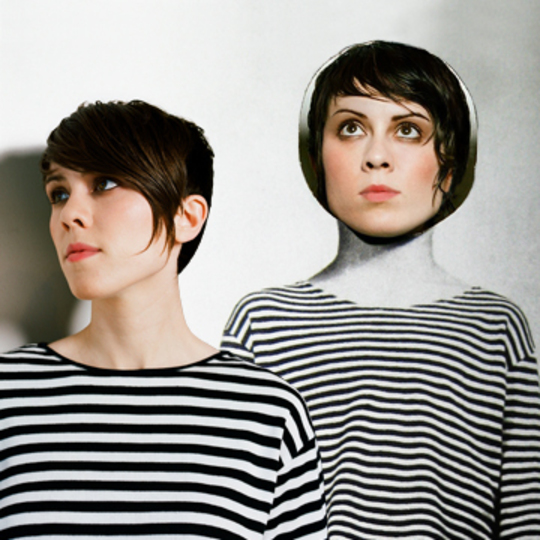 Tegan and Sara Quin aren’t nearly arch enough to have dubbed their sixth album Sainthood by way of comment on the seemingly indestructible devotion they inspire. Nonetheless, take a couple of irony lessons and they’d be well within their rights to do so. If the sisters are far from critics’ darlings, then their latterday plunge into quiescent AOR waters has seen their grassroots fanbase swell and solidify to proportions that sorely stretch the definition 'cult act'.

As somebody genuinely bowled over at the time by the bubblegum folk rattle of 2003’s If It Was You (seriously, ‘Living Room’ and ‘You Went Away’ are a couple of this decade’s most effortlessly affecting songs), this has all been a little baffling.

The following So Jealous and The Con completely flew in the face of the bracing DIY arrangements of yore, auxiliary musicians hired to smooth and erase the quirks. Songs crept well over the two minute mark. Endorsements were won from the type of US TV shows that decreed ‘Snow Patrol’ and ‘emotion’ to be interchangeable concepts. Yet worship for the pair intensified as their rough, sparky, melancholy was traded for a slick grey backdrop with next to nothing in the foreground. You’ve got to figure that the whole lesbian-identical-twins-with-wicked-awesome-haircuts ‘angle’ has been a major aid on the way to canonisation; those earnestly strangled vocals and odd syllabic emphasises are about the extent of edginess as far as the last couple of albums were concerned. Which is not to be entirely dismissive – there is nothing wrong with a bit of AOR, and at their recent best the image and the vocals serve as the spoonful of medicine to help all that sugar go down. But still: you get the feeling they could come out with a track-for-track remake of Sheryl Crow’s Tuesday Night Music Club and still remain largely adored.

It’s nice to report, then, that while Sainthood is far from an exercise in perversity, it does make it pretty clear that the Quins aren’t unduly concerned with comfort zones. Where The Con featured the odd cosmetic electronic flourish, parts of its successor constitute a musical negative, brittle, dissonant machine sounds occasionally warmed by the odd lick of familiar acoustic guitar. Of course it’s no glitch odyssey, and in essence the twins are still writing pop songs about feeling a bit heartbreaky, while Dave Walla’s production maintains that OC-redolent glassiness. But still: as ‘Arrow’ ushers Sainthood in on a taut, squelchy synth riff, we are hearing something new, possessed of a darkness in texture that goes beyond ‘angst’, a cold, hostile canvas that highlights just how weird the pair's vocals sound. The bloopy ‘Don’t Rush’ maintains the tension to some extent, a compact little new wave pop song that threatens to burst into a Big Chorus but holds a surprising amount back; ‘The Cure’ is a comforting, minimal twinkle, with a beautifully understated chorus of phased “ooohs”; the excellent ‘Night Watch!’ is genuinely pretty fucked up, seasick beats undulating listlessly as an echoey, dislocated Sara squawks about having “grounds for divorce”; ‘Alligator’ hits its stride as a sort of weirdly compelling baroque disco number.

All very nice, though by-the-by, there’s still plenty of latterday Tegan and Sara by numbers here. The likes of ‘Hell’ and ‘Sentimental Tune’ offer deftly bland emo-pop, while ‘The Ocean’ epitomises the problem with this duo – cracking strum-along tune, awful, awful what-the-fuck-happened-to-stiff-upper-lips lyrics: “Well I know what I want and what I want's right here with you” runs the chorus, shamelessly.

I suspect the view that Tegan and Sara defaulted on their early promise is not a particularly popular one. ‘Serious’ critics have never really had much time for them, while the hardcore are clearly enamoured of their more polished efforts. But for all the dubious associations of those last two records (horrible though it us, P4K’s ‘tampon rock’ tag does stick in the mind), it always seemed fairly apparent that the Quins were essentially doing their own thing, and that happened to be pretty commercial. It’s heartening to see that their obvious interest in electronic textures has led them out of their AOR fastness, if only a little. Whether If It Was You or So Jealous serve as your touchstone for what this group should be, Sainthood is unlikely to leave you one hundred per cent satisfied. Which is good - in their own way Tegan and Sara are mavericks; that’s what always saves them in the end.