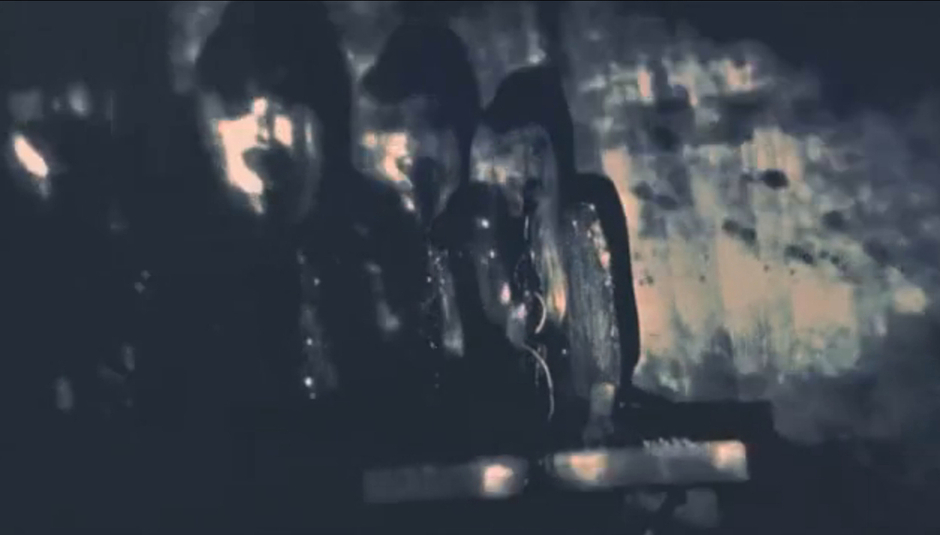 A little latter than planned, DiS is streaming the new album from Echo Lake, and has a track by track guide to the album by the band.

In case you weren't aware, earlier this year Echo Lake released a brilliant 9/10 scoring album entitled Wild Peace. David Edwards, who reviewed it for DiS, said things such as "...the music swirls around with an M83/Beach House dream-state innocence, underscored by the treble and reverb-heavy crunches of Galaxie 500 and The Jesus and Mary Chain (also evident in their clear love of classic Phil Spector/Brian Wilson song arrangements). But that’s where the comparisons need to cease, as they serve little further purpose when considering an album that stands perfectly straight and tall upon its own bedrock. Because despite influences, Echo Lake have an approach that states that the song comes first, and the music complies and dances to the underlying tune," and things like: "Wild Peace sighs and soars; melts and merges with you and ultimately, delivers many times more than the mere sum of its parts. Of its particular genre, it’s something truly magnificent and possibly boundary redefining. In any field, it can comfortably jostle for elbow-space with the finest records of 2012 thus far. Wonderfully accomplished in construction, devastatingly powerful in delivery, Echo Lake have just raised the bar one notch higher for everyone around them."

Everything was going great for the band, with plaudits pouring in all over the place, and then came the announcement that the band's drummer had died. Understandably, the band put things on hold and took some time off. However, a few days ago we received the below (we had asked the band to do it before we learned of the passing of their drummer), and the PR pinged us this embed code so you can hear the album.

'Further Down' was always intended as our album opener but at the beginning it didn't start with my vocals on their own, that was more like a happy accident. I recorded various 'oohs and aahs' on to the beginning of the track for Thom to mix in to the song later on but he decided to keep them at the start. The song is quite haunting because it kind of creeps up on you. The idea was for it to sound holy and intense but at the same time it's straining and threatening murder so it's quite unsettling.

'Another Day' is our catchy pop song, it is about drowning in boredom and wanting to break routine and waiting to be swept away by something new, to start all over again. The song is a reminder that there is always going to be a brighter day ahead.

'Wild Peace' is our saddest and most melancholic song, It's a bit like the play 'Waiting for Godot'. It's about waiting for something that you know will never come and desperately longing to create another dimension where the impossible can happen. So you build an imaginary world in which they are possible. It's kind of like a spiritual prayer about wanting to believe in something bigger and otherworldly and seeking guidance from above.

This song took us the longest, I can't even think how many versions and mixes of this song have existed. It's just always been incredibly important to us to get this one right.

Like a lot of our songs, 'Even the Blind' is melancholic yet magical and supernatural, where you are stepping away from reality and in to a world that is out of our reach. In the song someone is being abducted by an extraterrestrial force and being taken away. It's like an out of body experience. At first you try to pull it back but then realise that the force is bigger than you so you watch them get pulled up in to the sky and it's magical. It gets very euphoric and scenic, it's kinda like an exorcism.

Thom wrote this song at 1am one night for his girlfriend to help her get to sleep. The song was supposed to be called 'Monday 1am' and I feel really bad because somewhere I called it 'Monday 3am' by mistake. Then No Pain In Pop got confused and called it 'Monday 5am' on the album. I don't think we can change that back now.

This was a very early song of ours and I remember when we first put this demo out, we put a note next to it saying 'this is as poppy as we'll get', looking back it's quite funny that we said that because some of the stuff we wrote since then is way popper.

This is a re-recorded and mixed version of the song that was on our EP. If you listen really really closely you might be able to find Thom singing in the background too.

The song is about one of those scary feverish dreams that wakes you up and then you find yourself in a semi-conscious state having a really terrifying time. Your mind is being messed with by shadowy figures and ghosts, almost like having a panic-attack and you can't quite work out what is real and what isn't.

LAST SONG OF THE YEAR

At one point this song almost didn't make the cut for the album but then we left it sitting for a few months and Thom came up with the guitar line which brought it back on to the album and has now become one of our favourite songs to play live. Some of the vocals were recorded a year apart. One set were recorded in the basement of a shop Thom was working in and the other half were recorded almost a year later when I had a cold so they sound a bit weird.

It's about the end of the year, a time where people feel the most hopeful for change and expect something new and bigger to come their way.

I was writing melodies for this before going to bed one night. I fell asleep with the headphones on and woke up with clear memories of my dream. It was one of those dreams that seemed so real that you are exhausted when you wake up, so I wrote the lyrics about it.

It was a post-apocalyptic dream, the world had been taken over by a tidal wave and I had survived. I wasn't sad, it was sunny and I was swimming with some people towards nothing. We knew we were all going to die but we kept swimming towards the sun. You just had to remember how to swim, nothing else was ever going to matter again.

Just Kids is a song about a little girl who waits till night time to go to her secret fairy tale world and never tells anyone about it, like in the Brothers Grimm fairy tale 'the 12 Dancing Princesses' where the princesses wait till night time when they were locked in their bedrooms but escaped to go dancing. When I was little I used to fantasise about being one of those princesses who could escape at night.

Wild Peace is out now.