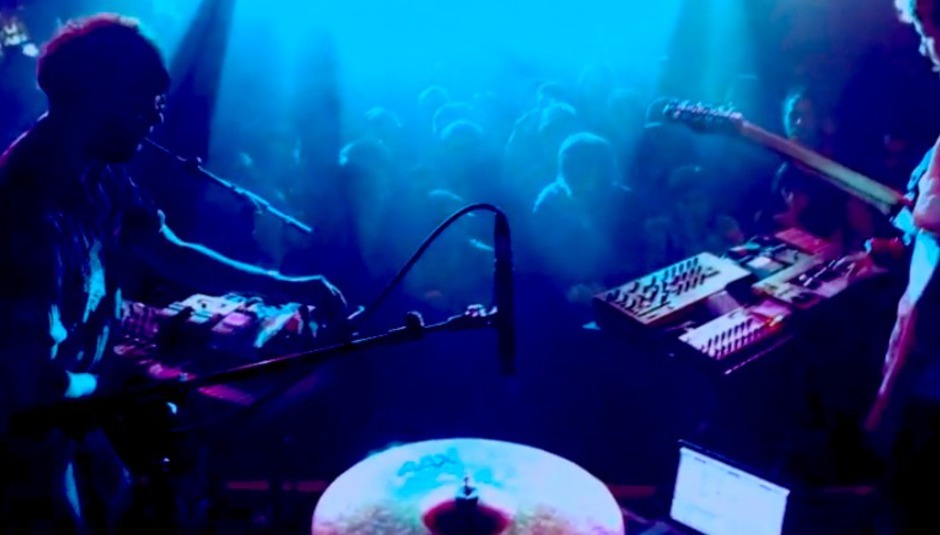 DiS' editor picks a selection of things for you to watch and listen to this weekend...

To kick things off, here's some exclusive footage of Spiritualized live at Glastonbury in 1993, performing the song 'Smiles' shot by the makers of Glastonbury the Movie: In Flashback (see below).

Glastonbury The Movie: In Flashback

In cinemas nationwide on the 29th June 2012 is Glastonbury the Movie: In Flashback, which is a new version of the documentary originally released in the early 90s. In their own words it "is a revealing snapshot of British cultural history drops you right in the middle of the best of the old-school pre TV camera Glastonburys." The doc features live performances from The Verve, Omar, Spiritualized (see above), Stereo MCs, Lemonheads and many more. It was directed by Robin Mahoney, who says it's “From the point of view of festival goers, and not just point our cameras at the bands, we've ended up with a telling picture of British life at that time". For more info visit glastonburythemovie.com. This is the trailer:

Speaking of festivals... you may remember that a few weeks back there was one in Brighton named The Great Escape, and that DiS curated three nights of music, one of which was headlined by the makers of one of the albums of the year so far: Errors. The scots blew our heads off. People danced like robots on acid. It was 'good times' indeed. Thankfully the chaps from BeatCast were there to capture the action, and we can now bring you the whole live set, which is very likely to get you dancing at your desk...

Speaking of awesome Scottish music... Meursault have shared their first single from their new album Something For the Weakened (out via Song, by Toad on 16th July 2012). We loved their previous album (have a read of this) and we like this new tune, and if you do too, pick yourself up the coloured 7".

In case you missed this:

Just before the Irish songstress played the DiS stage at The Great Escape, Gemma Hayes sat down with DiS and Beatcast to discuss sanity, how grunge and Bob Dylan inspired her and she shared some thoughts on writing music with a hangover...

...and in case you missed it, here's the session Gemma recorded for us backstage...

San Francisco duo Two Gallants re-appeared on the radar this week, with news that their fourth LP The Bloom and the Blight will be released on Monday 8th October via Fargo Records. The first tastes sounds more subtle and restrained (some might say refined) than we remember them, but it's a decent tune nonetheless...

They're back and waxing lyrical about blogger thugs, shittin' black blood, groupies with big breasts sending out group texts, first world curses and sturdy purses... WHY?'s ‘Sod in The Seed’ EP will be released on the 13th of August via City Slang in Europe and Anticon in the US, as a limited edition release of 1000 12” vinyl at their the tour. It will be also available digitally. Tour dates and more over at whywithaquestionmark.com.

This came out as a single this week...it's as delightfully delirious as anything these South Londoners have done to date, flying in a Mystery Jet and crashing into Sparks' wardrobe...

This press release is too funny (both peculiar and haha) for me to waste my time writing anything...

Gatekeeper have blessed us with a special edit of "Tree Drum" which includes "Pre-Gen". This is true to the listening experience, which has no gaps in between tracks. New media artist and 2011 Rhizome Grant winner, Tabor Robak, has painstakingly designed a fully explorable virtual environment to featuring music from Exo to complement the LP's release. Additionally he designed the artwork and a special font which can be used to decipher hidden messages within the artwork.

Exo will be available worldwide July 17th, 2012 on Hippos In Tanks.

Here's the video for 'Let Yrself Be', the second single to be taken from Jimmy's recently released album, Majenta on Hotflush Recordings.

The UK government and its arts funding side of things has been getting a lot of flack, especially over the cultural olympiad, but did you know the British Council does a hugely popular radio show hosted by Goldierocks? This regular two hour selection of new music from the UK is exported worldwide and is well worth a listen, especially as this edition of show features a special interview with Jessie Ware. More info over on selector-radio.com.