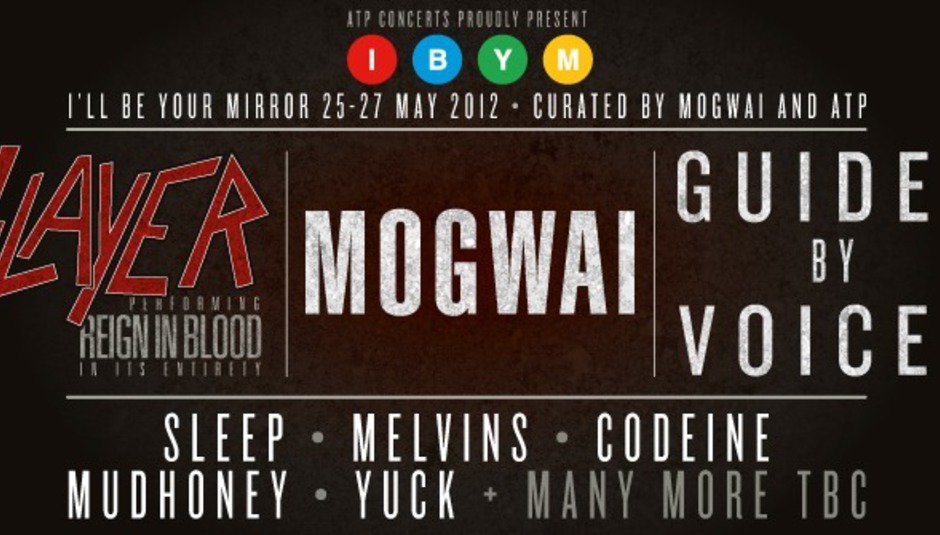 ATP have announced the initial line-up for next year's instalment of I'll Be Your Mirror and, lord, it's pretty spectacular. No fannying around here as Mogwai, Guided By Voices and Slayer are headlining a day each. Slayer, people, will be performing Reign In Blood in full, which isn't such a bad thing.

The other bands which are on the bill so far are Sleep, Mudhoney, Melvins, Codeine and Yuck. Like we say, an utterly fine start, isn't it? It'll be the first UK Guided By Voices show with the "classic" line-up since 2003, and they've got a new album on the way too. That said, I'm sure there will be plenty of classic songs. And plenty of songs in general, actually.

Next year's event takes place at London's Alexandra Palace on Friday May 25 (4-11PM), Saturday May 26 (Midday-1AM) and Sunday May 27 (Midday-1AM). There will also been a cinema, food, more (cash) bars, toilets. Plus there will be shuttle buses from Wood Green to the venue and back. Headliners will finish at 11PM. More bits and bobs found on the IBYM Tumblr.

Tickets go on sale at 10AM on Friday November 11 on this website. Friday-Sunday tickets cost £130 whilst Friday tickets are £39, and Saturday and Sunday tickets are £59. For your info: the bands playing on Friday are Slayer, Sleep and Melvins, Saturday: Mogwai, Mudhoney and Codeine, Sunday: Guided By Voices and Yuck.