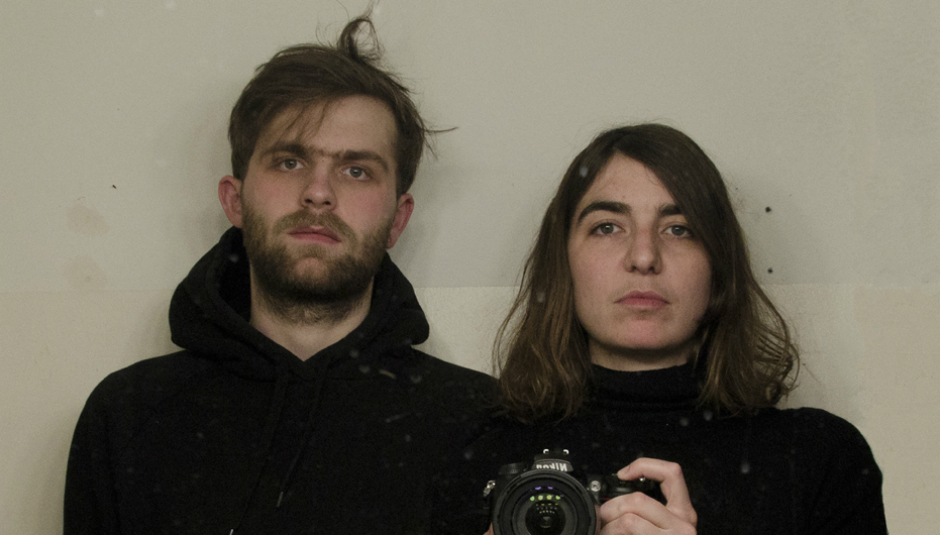 Some records confide in their listener in such candid, visceral ways, it feels almost voyeuristic. Some artists do this with processing grief, others with past trauma. In the case of bedroom project Ghost Bag & Tine Fetz, we bear witness to the unfolding relationship between a musician from The Netherlands, Nick Jongen, and a comic artist/illustrator from Germany, Tine Fetz.

This mutual attraction isn’t veiled in conceptualism, but genuinely unfolding before us in real time. Chronologically, like two pen pals, Jongen and Fetz exchanged illustrations and songs in a deep conversational way. Each document, the album and the zine, represents one half of this long-distance exchange. Fetz tells DiS how the dialogue started: “Nick asked me to design a shirt for his band Baby Galaxy, then we met at one of his shows. We started writing to each other, and figured out we liked each others’ work. And we wanted to collaborate. I sent Nick a drawing, something I already had laying around. I never did anything with it. It was a picture of a heart surgery. Without saying anything about it I sent it over. The same night Nick wrote a song about it.”

Jongen, sitting next to Fetz on a sunny terrace in Rotterdam, adds: “Yeah, I wrote ‘New Heart’ that very night. It’s a lullaby for a child whose father is getting a heart surgery. Initially, I looked at Tine’s drawings as a Rorschach painting, where the stains are up for interpretation.” Jongen explains the project was initially not meant to become the highly personal document it eventually became. It began innocently; a playful meeting of ideas from two different disciplines, just to see what would happen. Fetz: “We wanted to maybe put it out as a cassette, on a label ran by a friend of ours. We didn’t really have a plan, but by the second song, ‘It’s Loud It Is The Season’s Call’, we both started to notice it became personal very quickly. It developed from there at some point, so we decided halfway through: Why stop there? Let’s make a full-length, continue until there’s no more room left.”

Communicating beyond casual dialogue, using sound and image, unshackled both Fetz and Jongen’s thinking in unexpected ways. Fetz, whose black and white comic art is rooted in humour and satire and is usually applied for other publications, isn’t used to her work explicitly reflecting her own emotions. Meanwhile, Jongen opened up as well: “I always tend to hide behind metaphorical thoughts, and on this record, that became less and less. The first recordings I’ve made under the Ghost Bag-moniker was at the age of seventeen. I could never really come up with something which I felt was good enough. When we started collaborating it was very liberating, because all of a sudden, within two months, we made this together. And I’ve never done anything like this before, where a record and a zine become this symbiotic creative thing.”

At one point, their work synced up in such scary accurate ways, you could almost consider it a psychic connection. As a reaction to ‘It’s Loud It Is The Season’s Call’, Fetz drew a large wooden beach house based on a photo she once took in New Jersey. “It resembled the atmosphere in the song, the loneliness.” After she sent it back, Jongen cracked further. It triggered a very specific memory of a similar place in New York, at Rockaway Beach, of him recording the sea, a recording that made it into the third track ‘At The Movies’. “Even on top of the world / The last stop is the sea / It still pushes and pulls after the subways leave”, he reflects in his solemn warbling voice, one that to some degree recalls Pedro The Lion’s Dave Bazan. “And sometimes love / It seems all too real / When it’s right in front of me / But I can’t feel”.

Movies and fiction pop up a lot in Jongen’s lyrics. On Baby Galaxy’s terrific debut LP Mighty Night, for instance, he named one song ‘Home Alone I & II’. Escaping in fictional matter, he explains, is his way of making sense of the real world. But in his correspondence with Fetz, he admits those creative defence mechanisms started to crumble under the weight of his affection. Jongen: “For years I almost felt like a sociopath. I just didn’t have any feelings, but I could understand them in a conceptual way. By the sea that day, it somehow dawned on me that I am able to feel. That I have a right to feel.”

Right then, Fetz realized it too: Jongen was accessing some long-suppressed feelings. As a response to ‘At The Movies’, she drew her own room; an empty bed, cupboard stacked with an illustration of Ariel The Little Mermaid, and the book Solaris by Stanislav Lem. The small illustration on the wall depicts a distant celestial body from the surface of another; whether it’s a painting or a window is left in ambiguity. What Solaris and the Little Mermaid do have in common, perhaps, is the overcoming of complete exile and isolation. What Fetz was trying to convey to Jongen is up for discussion, but there’s no question the image itself shows a place of extreme intimacy – Fetz is letting Jongen into her world as well.

Jongen: “To me, it was very clear to me Tine was far away, that I couldn’t just come over. As we were both creating – in order to come closer – we had to deliver these very personal reflections.” Fetz and Jongen had only met once in person prior, at the aforementioned Baby Galaxy show in Berlin. “We decided we wouldn’t meet in person again until the record was done to maintain the romantic tension.”

As that tension grew, the more candid the confessions became. “My back it aches and I’ve still got sixty more years to go”, Jongen laments on ‘Exile’; though optimistic about a long, prosperous life, he’s wary of bending to its inevitable change. In response, Fetz makes her boldest advance yet. She collocates the illustration of two galaxies inching closer together with an image of her hand on a naked shoulder; an image evoking a strong sense of yearning. Whereas a written or spoken message holds a rigid set of meanings, an image can hold multitudes. This is the record’s Big Boom moment, where the falling in love part is captured in arresting fashion, cosmic particles rapidly palpitating within a single instant.

Though their galaxies were slowly merging as one, initially, both Fetz and Jongen were wary of sharing the music and illustrations with anyone else. After all, there’s a difference between watching a movie yourself and simply reading someone else’s description of what happens. “We were worried about how it could translate into other people’s hearts,” Jongen admits, “instead of it just being our own little microcosm. Because we are basically releasing a diary. It’s scary. It’s the scariest thing I’ve ever worked on. But also the nicest.”

As opposed to just casual dialogue, making a truthful piece of art requires a bigger investment. A melody or image holds so many more dimensions; you can interact with it in ways beyond just didactic meaning. But on ‘Portal’ an arresting truth finally spills over backstair fiction. Jongen chronicles the last time he visited his grandfather before he passed away: “We drove past the retirement home, and I told my mom ‘Let’s go visit him’. He had light dementia, and would seem normal and then suddenly confused… Then he would be fine again. It was at this moment where he sort of accepted me at eye level. It was strange to me that he would die the next day. I just had this urge, this hunch, that we had to go there. It’s honestly one of the strangest things that ever happened to me.”

Fetz then drew a comic of four panels: the first two depicting a dead deer killed by the side of the road, the second two showing a desert mountain landscape and a person driving a curved pathway uphill. As a reaction, Jongen wrote ‘Atlas Fucked’, a harsh admonishment of himself and his lifestyle choices as a travelling musician: “I can’t carry a lot of weight on my shoulders responsibly”. Jongen’s darkest doubts of following through in relationships permeate through: how could he navigate for two souls, when he can’t even get a handle of his own life trajectory?

Jongen: “I had a lot of friends with a lot of problems, and I always felt responsible. But I wasn’t in control of my own life, so I couldn’t help those people. This dilemma on ‘Atlas Fucked’, it’s only a feeling of responsibility, but you’re confronted with your inability to do anything. You have good intentions, but they don’t translate. And you get down because of it. I couldn’t fulfil this purpose.” Despite Jongen being incredibly hard on himself here, the chorus hook of ‘Atlas Fucked’ soars with an assured pop levity: “I have to watch out / I have to watch the road / I can’t right now / Or I’ll kill us both”.

The next image drawn by Fetz simply captures two silhouettes looking over a balcony. It’s compassionate in all its simplicity, enough for Jongen to finally gain acceptance on ‘Friendly Ghost’: “Where have you been all my afterlife?” It’s an incredibly moving moment, as the two artists definitively accept each other’s inner blemishes. The album then takes a wonderfully charming, quirky turn from here on out, both Jongen and Fetz’s love for creating simmering through. Recorded during the holiday season, a goofy Christmas Carol pops up on ‘The Warmth’.

Sometimes interpretations of drawings and songs took on disparate paths, which created unexpected rifts of fun. In one image, a dog stands in front of a wooden beach shack, meant to be a peaceful and inviting image. Except that Jongen mistook the dog for a bear, giving it a more sinister twist; both reminisce in laughter about it now. With the record finished and released, Ghost Bag & Tine Fetz are now reunited together in the flesh. From here on out, they plan to take these songs on the road together.

Fetz, who also plays bass, thought she had given up playing live music. And Jongen, a tireless touring musician stubbornly reluctant to wear his emotions on his sleeve, has finally shed his armour: “I don’t feel awkward playing this music, but I do feel fragile. We still talk a lot about this project in our daily lives, and start singing soft melodies.” And thus, the doubts of sharing their galaxy with the rest of us linger no more.

Ghost Bag & Tine Fetz is out now via Don Giovanni Records, Subroutine Records, and Adagio808. You can listen to and order the zine/album from Bandcamp. For more information, including forthcoming tour dates, please visit their official website.