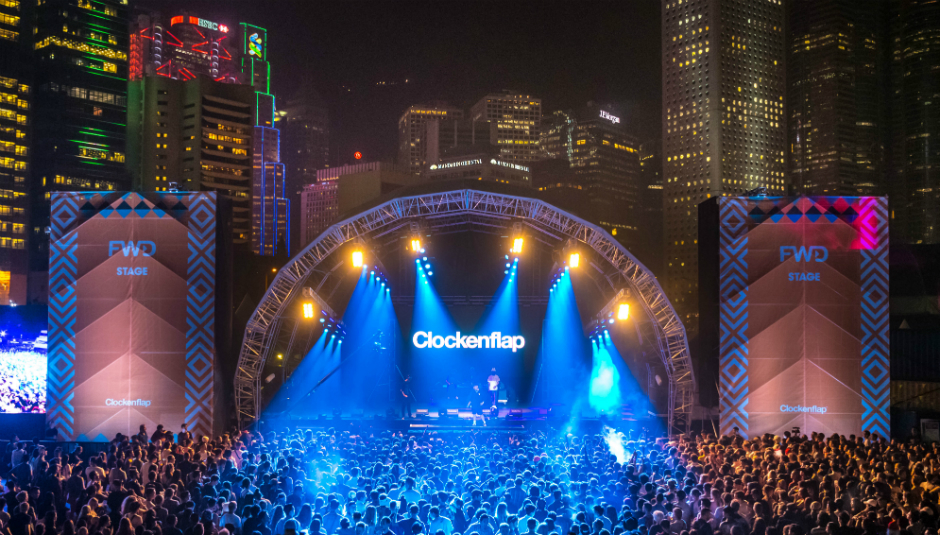 It’s Friday evening, about 8pm. A ship sails through Victoria Harbour, a cargo vessel, lit up like Christmas. The Canadian singer Feist takes a second glance and marvels: “Wow! That is so beautiful. Do you realise, this doesn’t happen anywhere else in the world? This city feels like we’re a century in the future!” And she’s right. Nestled among skyscrapers emblazoned with the neon logos of their corporate tenants, Feist is currently playing the main stage of one of the most spectacularly-situated festivals you could hope to attend. It’s Wall Street meets Blade Runner, and it’s bonkers at first sight.

Fast-forward to Sunday evening, about 10pm. Massive Attack are playing a dark, sonorous set. On the screen behind them flashes headlines lifted from media, in English and Chinese. Migration figures and GDP forecasts abound, but one screen sticks out. “Poverty in Hong Kong reaches a record high, with one in five people considered poor.”

There’s a dichotomy at play here: Hong Kong is a wonderful and spectacular place, if you can afford it. Inequality is a huge issue here, as it is in many parts of the world: the rich get richer, the poor get poorer. At the same time, though, the Hong Kong government is splurging obscene amounts of money on vanity infrastructure projects, such as the ludicrous 55km bridge linking Hong Kong with Zhuhai and gambling den Macau, which will cost more than US$20bn, of which 50% will be paid by the Hong Kong taxpayer.

Arts is another area starved of support. The government proclaims Hong Kong to be a cultural hub (among many other things), but displays little interest in ensuring said culture has space to thrive. Extortionately high rents have forced numerous live venues to close – not a problem isolated to Hong Kong, but with so few venues in the first place, every closure matters. At the same time, authorities have targeted indie nights, forcing celebrated club Hidden Agenda to shutter this year after multiple closures and arrests due to licensing issues. Indie is pushed to the margins here, and those margins are becoming finer and finer.

All of which is a roundabout way of saying: the weekend of excellent music between these two portentous bookends told a story in itself. Clockenflap is an anomaly in Hong Kong, where there are far too few opportunities to enjoy great live music. And this was a weekend of great live music, showing real diversity and strength in depth.

Speaking to DiS before the festival, co-founder Justin Sweeting said that venues are just one of the problems with the music scene here.

“There are also deeper, more systemic factors which aren’t quick fix type scenarios. What it comes down to is that we’re lacking a strategic, long-term vision and plan which addresses the needs from the grassroots level upwards, starting with education, on how creativity and cultural pursuits are appreciated, with a suitable framework to support their development. We’re someway away from that at the moment, though there are groups of people across the city doing their best to keep things moving forward.”

Credit to Sweeting and his co-organisers then for consistently putting on a great show. Clockenflap had to move from its previous home in West Kowloon to the Harbourfront on Central Hong Kong Island two years ago, but they’ve made a success of the shift. A smaller space made the festival more intimate, with all the stages easily accessible within a few minutes. The quality of food on offer was fantastic, with a smooth and working wristband-based payment system. But primarily, the success of this weekend was down to a great and nicely structured line-up. For some Hong Kongers, this will sadly be their main dose of live music for the year.

Clockenflap is perhaps one of the few music festivals where you’ll see people milling about in their work shirts on a Friday evening. There’s no camping here and it’s bang in the middle of the city, so it must have been a curious sight that Leslie Feist gazed out upon from the main stage on Friday evening. She opened with ‘My Moon My Man’ from her breakthrough album The Reminder, complete with a crunching guitar riff, heavier in the flesh. This set the tone for her set, which was closer to PJ Harvey than the pop tones fans of ‘1234’ (which was a noticeable absentee from her set-list) may have been expected. ‘Pleasure’, the title track from her excellent album of this year, was the stand out of a fine set.

Higher Brothers are a hip-hop act from Chengdu. They made headlines earlier in the year when one member was hauled before the censors after appearing to threaten the government in a track about Uber. A number of viral videos in this part of the world had clearly inspired the large crowd that gathered to see them. They responded in kind. There was effervescent bouncing, a couple of "taps aff", and a storming rendition of ‘Made In China’, their biggest hit, in a hugely entertaining performance.

Later on Friday evening, a choice between the Kaiser Chiefs and Kid Ink meant you were damned if you did, damned if you didn’t, as it were. The bulk of the crowd milled towards Ricky Wilson’s chump rockers, leaving us to catch a glimpse of the latter, in all his tattooed glory. Unimpressed, the Silent Disco seemed like the safest option – the only occasion on the weekend when the options were thin.

As expected, Tinariwen proved to be a highlight of the weekend. The Festival Moment is a timeworn cliché, but if you’ll indulge me: this was one. There was something incongruously beautiful about the sight of a troupe of rockers from the Sahara playing in the centre of one of the world’s most densely populated cities. Decked out in their Tuareg finery, to a backdrop of shiny towers, their set was spellbinding. It didn’t take long to find a groove in which they spent the entire set: Tinariwen’s music is as hypnotic as the deepest techno. This was visually and audibly spectacular.

As if designed to drag us from the Malian trance kicking and screaming, two acts on the next stage provided some serious venom. Local post-punk outfit David Boring have been talked up as the “angry sound from Hong Kong’s underground”, and have spoken about how their sound is informed by the tension from the Occupy HK movement of 2014. This was palpable on Saturday afternoon: angular guitars and vocal yelps were delivered to a boisterous crowd, who were gobbling it up.

Slaves, meanwhile, reserve their ire for an establishment that left Hong Kong 20 years ago, when the UK government handed the region back to China in 1997. Jetlag didn’t seem to have quietened Kent band’s rage. ‘Fuck The Hi Hat’ was delivered with animus, while ‘Sugar Coated Bitter Truth’, especially the lyric “Don't trust the flies they are government spies”, could have been penned for the creeping influence of the Chinese government in Hong Kong. Slaves make a splendid racket, for a two-piece. This set brought us to the less travelled junction where Rage Against the Machine meets Sleaford Mods.

The rage continued as The Prodigy closed Saturday in the pouring rain. Despite the years, the enthusiasm remains undimmed. The band rollick through the hits, ‘Firestarter’, ‘Smack My Bitch Up’, ‘Poison’ – they’re all present and correct – and the crowd went bananas. An encore rendition of ‘No Good (Start the Dance)’ stole the show. Speaking of the spectacular light show, one reveller, in an unconfirmed state of inebriation, said: “It looks like a massive spaceship.” Of the sight of Maxim Reality bounding about the stage like an unhinged Predator, the same reveller: “I’m scared.” This was a lot of fun, provided by band and crowd, and a great way to round off the day.

I was a latecomer to Mitski’s music, but her superb Puberty 2 has been on the speakers for much of this year. Heavily confessional, but not light on wit or melody, it was interesting to see her greeted with such zeal on Sunday afternoon (but then, that seemed to be the default reception for most acts over the weekend). Midway through the set, ‘Your Best American Girl’ stood out as a high point, followed as it was by the excellent ‘I Bet On Losing Dogs’. Thrashing out with penultimate crowd-pleaser ‘My Body's Made Of Crushed Little Stars’, Mitski Miyawaki seemed humbled by the reception – but it was all well-deserved.

Young Fathers have earned a reputation for one of the most dynamic live Scottish acts of recent years, and this image was preserved and augmented on their trip to Hong Kong. A fantastic set, led by the spectacular ‘Only God Knows’, the unforgettable ‘Shame’ and the blistering ‘GET UP’ set the stage for their cameo with Massive Attack later in the evening, during the latter’s headline set. But for this hour, it was all about them – and what an exciting bunch they are.

Another of the weekend’s zeniths came in the form of Ibibio Sound Machine, who brought a festival of their own to the FWD Stage. The energy the band exudes is channelled primarily through irrepressible frontwoman, Eno Williams. Sporting the best shoulder pads this side of 1987, she is a captivating performer. Flanked by horns and guitars, red African robes, she held the large crowd in the palm of her hand. “Why can’t we all be free?” she asks before launching into ‘Give Me A Reason’, a song about the 276 girls kidnapped in Williams’ native Nigeria. But to young Hong Kongers in attendance, the question could easily be applied to their political disenfranchisement and disgruntlement.

Temples and Jungle followed ISM, and the contrast between the two bands couldn’t have been starker. Temples were excellent: a potent set of jangly psych pop that drew from Suede and the Cult. ‘The Mystery Of Pop’, with its swirling synths, sounded superb, while the anthemic ‘Shelter Song’ was more like the Beatles than the Bootleg Beatles, who’d played the main stage early in the afternoon. Jungle, on the other hand, were simply boring. A samey, Jamiroquai-esque soul band may have been some people’s cup of team, but was instantly forgettable.

I’ve already touched on the themes of Massive Attack’s headlining performance, and the fact that they were joined on stage by Young Fathers. This was an insidious and political set, on which they were accompanied by Horace Andy, whose voice sounds as ethereal and haunting as it did 30 years ago, Azekel (on ‘Ritual Spirit’) and Deborah Miller, a worthy stand-in for Shara Nelson. ‘Hymn Of The Big Wheel’, ‘Risingson’ and ‘Inertia Creeps’ were powerfully performed, while ‘Angel’ went down with the crowd as well as you would imagine. This was one of the darker acts you could choose to close a festival (and did little for the Sunday night fear), but it was a polished set, as much about the stagecraft as the music.