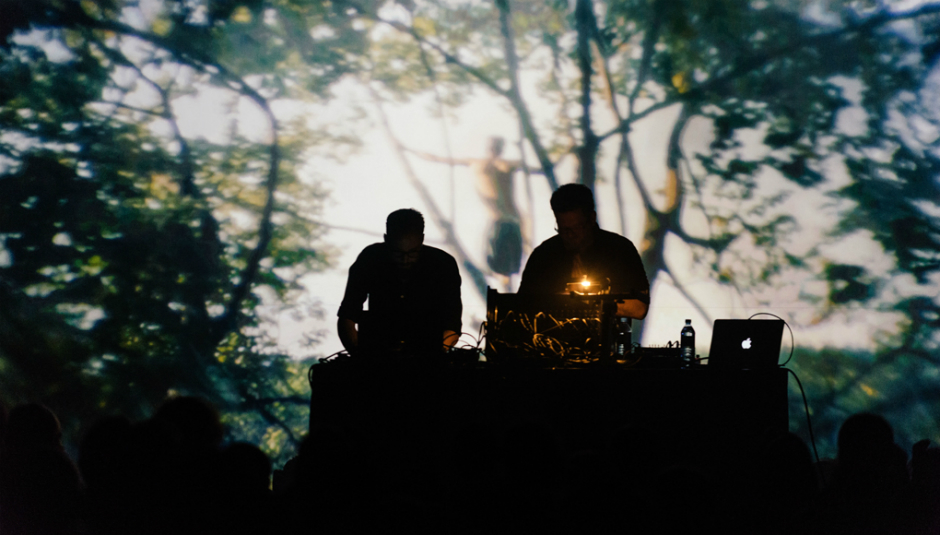 Adelaide is in many ways a remote place, a frontier town. Remote from me in Sydney, from the rest of the world. It is all the way at the bottom of the Australian continent, hidden out of the way of everything else. You have to go to Adelaide because you choose it, not because you run into it. But for a music festival like Unsound the landscape works in its favour. So far away it is protected. The people are more jolly, the audience curious and excited; even the ordinary citizens of the town were very welcoming. The location adds an element of remoteness or uncanniness to the atmosphere.

My first moment of Unsound was lost in the blizzard lighting show of Australian artist Robin Fox in one of Adelaide’s most beautiful and ornate old theatres. In the pitch-darkness, explosively loud electronic music synched to lasers that seemed to weave in and out of the audience, half of whom stood facing the proscenium arch while the other half stared toward the back, seeking out the presence of the artist hidden beneath the stairs. Known affectionately to locals as “Thebby”, the dress circles and high ceilings surrounding the dancefloor gave the festival a kind of respectability, while the engineers turned up all 18 array speakers so loud the audience could not escape a single detail.

Fox used the architecture of the theatre to its best advantage, projecting onto a screen geometric forms from laser beams synched to a blistering electronic sound. He synchs the sound by sending the same signal to speakers and lasers connected to high-speed motors. It felt like being inside the chrysalis as it transforms into a butterfly, but in a world without curvy lines. The geometry of the sound was very angular and pointy, constantly opening out and thinning down.

Pharmakon from New York made it easy for the audience to know where to look, reliant as her work is upon demands for physical proximity and presence. The movement was relentless, stalking up and down, on and off the stage, staring audience members in the eye and chanting fervent vocals. I immediately identified, and wanted to put her in charge of any difficult or frustrating communication, the spirit behind our strained efforts to come up with words. She told me how the intensity was based on an exchange with the audience, for them to be compelled by the immediate moment and not distracted by fake notions of cyberspace or thoughts of elsewhere.

After the originality of the first two performances, I found Wolf Eyes sounded corrugated and a bit slapstick. Their rolling industrial drone with lots of stops and starts and strange kind of 90s vocals overlaid was not harsh but rough, a rough tongue in cheek.

At Fowlers, Amnesia Scanner played a serious AV set of dirty dance music, mixing episodic trance and sound effects with plain silence. There were volatile and constantly progressing intensities, occasionally firm, steady, rhythmic and distorted. Then it would stop to give time to ask yourself, what will happen next? That constant feeling of expectation was expertly balanced, with the sequencing of these changes enough to constantly disrupt expectations and challenge how to listen, without getting lost to total randomness. I woke up still dancing to it days later.

Saturday night began with Kara-Lis Coverdale playing romantic electronic music, droning low frequencies complimented by a mix of ambient, forgetful and contemporary classical. Bill Kouligas and Amnesia Scanner’s collaboration Lexachast followed, disjointed noise music with a kind of screensaver backdrop of randomly generated images, set to this soundtrack of electric motors and strings. A surprisingly dramatic set, full of muffled cries and things dropping off the side of cliffs, which derives poignancy from the strange images. While the drama of the sound was very effective, the imagery was sometimes of questionable taste. Maybe that was the point? The overall effect was kind of disturbing in that Koyaanisqatsi way that decontextualized images over disturbing music are.

Holly Herndon and her collaborators Mat Drysdale and Colin Self cleverly maximised the immediacy of the live experience, putting together art and music in a way that you could never predict by reading about or even watching YouTube videos of their work. Harmonising with collaborator Colin Self worked to give Herdon’s vocals a power and warmth, which overrode the sputtered randomness of the bits and squeaks of the computer. And then there was the VR-style visuals, which the artists sustained throughout the performance, choosing to communicate in a kind of live marked up text, doing a screen share demo of opening the file, revealing their computerised methods before this bizarre animation pulled us down the rabbit hole along with the laptop, the stage and many of the quotidian objects of the artists’ home. As we let the choral vocals sweep us away, we were constantly reminded of what was actually going on, a self-reflexivity that didn’t matter because the overall effect was so compelling.

Like techno grandparents, club legends Porter Ricks told me they had a gap of almost 17 years in between albums, when their old label asked to re-release an album from the 90s. After being booked for a few new live shows, and finding it “fun again”, they decided to get back together and start putting out and playing music – using a variety of live techniques, including a user interface control they programmed for use on a smartphone. While their music was minimal it had a lot of shaky movement to it, like they had recorded the thousand and one strands of a carwash moving and found a way to animate them acoustically.

Corin played a beautiful live set at Fowler’s nightclub, her spindle of contemporary piano and electronic effects weaving strange mental tapestries. Errorsmith were more grinding, playing a piece of cutlery falling to the floor in an empty office block, with a sense of randomness and power.

On Sunday, N.M.O maintained the dynamism, playing a completely unique set that combined live drumming and electronics, with a sequence of performative actions that were entirely unique, and sometimes quite funny – making a joke of the macho, workout style of so much house music. And I don’t think you could really understand Unsound if you missed the finale performance of Señor Coconut. To see this ensemble cha-cha-cha band playing covers of Kraftwerk and other pop songs, was spectacular and absurd. The erstwhile ‘maestro’, Uwe Schmidt, is a respected electronic musician and composer who has been producing electronic music since producing a series of electro-industrial albums in the 80s as Lassigue Bendthaus. After days of very serious and original electronic music and performance to finish up listening to a 8 piece band singing “we are the robots, cha-cha-cha” was quite surprising, and subversive. The Unsound curators clearly have a good sense of humour.

By day three almost everyone was familiar, the remoteness of Adelaide breeding intimacy and encounters. Whether it is the random kitsch of the famed Christmas Pageant parading ice creamed streaked children and oversized plastic monuments through town at 9am on Saturday or the hypnotic, oscillating, arpeggiated kookaburra laugh that made a couple of North American noise artists laugh out loud and quickly grab their phones to make a record, Adelaide gave the event a kind of Australian gothic weirdness which somehow suited the scene, and the excellent music.