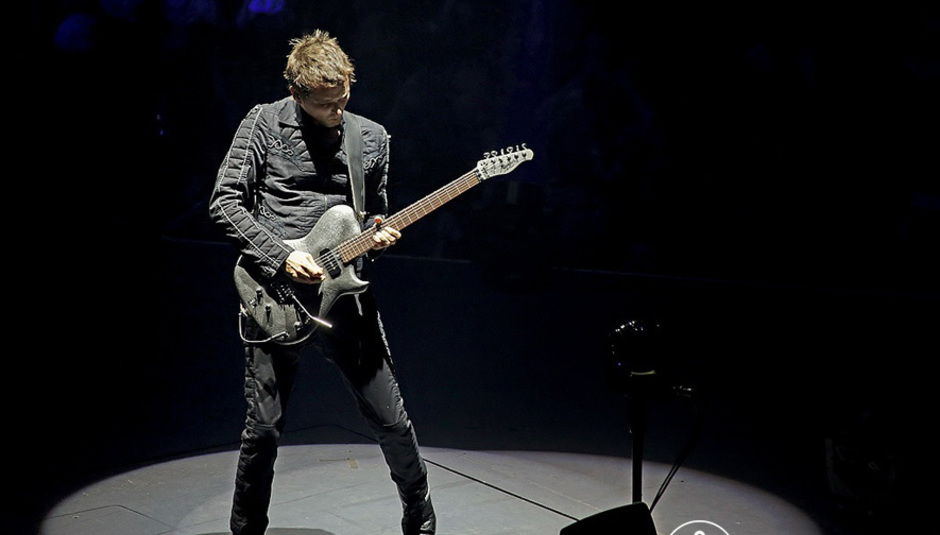 Why I keep going to watch Muse.

There aren’t many contributors here at Drowned in Sound with the appetite for Muse that I’ve got. Among music critics in general the trio seem to inspire scorn more than anything else in 2016. When Noisey did vox-pops with Musers outside the O2 Arena recently, they did so with thinly-concealed sneering at the idea that anyone might actually like Matt Bellamy and co for their songs. The Resistance and The 2nd Law were panned, while Drones was only slightly better received. Yet they’re still headlining festivals and selling out arena tours –which is obviously no sign of quality, but do they belong with the bland dregs that make up other stadium-slayers or is there something more?

Full disclosure: the Muse shows at Manchester Arena last weekend marked my 17th and 18th. Seven days earlier was my 16th when they played Birmingham. Add that to four gigs in 2015. But don’t mistake that for starry-eyed fanboyism. The Resistance and The 2nd Law deserved the criticism they received while the offering that Muse served up in the arenas touring those albums was shambolic. All of that anti-Muse sentiment boiling up inside peaked when they opted to close with a tired version of 'Starlight' on their 2013 stadium tour. Sure, we asked for 'Knights of Cydonia' to be replaced, but Bellamy, not for the first time, made his decisions appear closer to trolling. 2014 was a much needed break.

So why did I keep going back? Firstly, the first half of Drones is as good as anything they’ve ever done. The second half struggles but six very good songs is a decent haul for any band releasing a seventh studio album, especially when the two albums that came before were so disappointing. A tour of the smaller venues in the early part of 2015, with those fantastic setlists, reintroduced Muse as a band that actually cared about the fans. Download Festival 2015 was the icing on a cake many people thought they wouldn’t bother ever eating again, myself included.

Back to April 9, and Manchester, and Muse are rattling through 'Bliss' (from Origin of Symmetry) on a circular stage flanked with transparent screens that make up easily their most effective arena show to date. Importantly, it doesn’t stifle their song selection in the same way that the towers of 2009 or pyramid of 2012 did (in both instances, they only had visuals prepared for a very limited number of tracks). The setlist is also much longer than the 16 songs most have experienced Muse play at some point. I see 'Take a Bow' performed live for the first time (for me) since 2010. The next night an old favourite in 'Citizen Erased' is performed while 'Revolt' gets a rare UK outing. From 2009-2014 it appeared Muse were in second gear and on the evidence of the last 12 months it looks like they’ve realised it and are keen to rectify it as soon as possible. Sure, the circular stage prevents the crowd from being the most energetic, but it also makes those in the nosebleed seats feel like much more than an afterthought.

Nobody needs to come to me afterwards and explain why they don’t particularly appreciate listening to 'Uprising' or 'Madness'. I get that. I also get it if you don’t like Muse. But to cast them off as stadium offal as many have done recently is obscene. From 'Stockholm Syndrome' through to 'The Handler', they do this whole thing better than Coldplay and U2 have ever done. They’re a band with deep flaws but, for the most part, they’re flaws that have glued their hardcore fanbase together. They’re ridiculous and pretentious and I very rarely actually bother to put one of their records on anymore. Yet here I am, gig 18, back in love with them as a forgiven 'Knights of Cydonia' sends us all galloping into the night. It feels like Muse have finally nailed their own formula after years of underachievement and disappointment. It's probably too late to convince those who were never converted to begin with.

In 2013 I looked forward to a lengthy break from Muse. Since then the band have worked hard and, for the most part, reminded everyone why they ever bothered going along in the first place. This year sees me eagerly anticipating gigs 19 and 20. An achievement in itself.