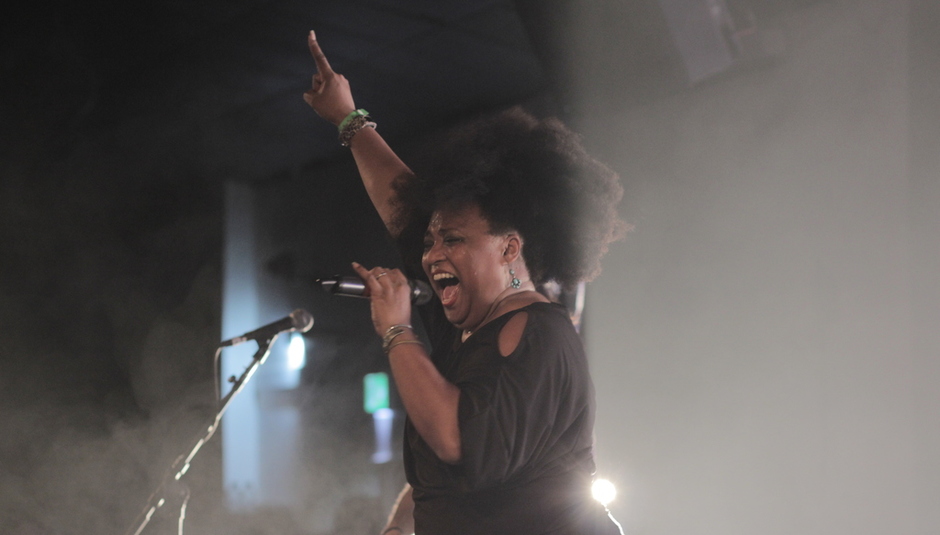 And that is the pervading mood of Stewart Lee’s ATP. It’s not just me. This is a mardy-arse event, everyone seems grumpy. It’s awkwardly male, astonishingly stroppy. And, well, that’s kind of perfect, isn’t it? Lee is a grumpy man, at least on stage (he’s very affable if you catch him off-stage), he’s booked a lot of other grumpy men: The Fall,, Sleaford Mods, and 13th Floor Elevators frontman Roky Erikson. Famously grumpy men Ted Chippington and John Cale haven’t even turned up. That’s how grumpy they are.

People are bitching a lot - about the facilities, about the scheduling changes, the cancellations, the poor organisation, the 'slippery cunt' who runs the ATP brand (I hear this constantly, especially when I talk to bands) the fact that it’s virtually impossible to get into any of the decent comedy events because the rooms are so small. Anything really. Just to have a moan. It’s like everyone is taking part in some sort of gigantic performance art piece. Which, when you think about it, is actually a very Stewart Lee idea. I start to suspect he’s done it on purpose.

It’s a theory born out by the setting - Pontins Prestatyn is bloody awful. None of the bars take cards but the only two cash machines on site are constantly out of order. There’s chips with everything, but they’re not very nice. By Sunday morning there’s no bog roll in any of the gents loos, which is a cruel trick to play on people sharing chalets. Speaking of chalets, you may have paid for the room, but it turns out you’ve not paid for the electricity - that has to be bought separately. The more of this you encounter the funnier it gets. This is a dour, indie version of Hi-De-Hi!, with Paul Shane replaced by Mark E Smith, and Su Pollard played by Josie Long.

I spent my childhood summers going to places like this; cheaper than Butlins, one up from going camping, and I remember always loving it. So what’s wrong with me? When did I become such a wanker? When did I start missing craft ales and decent coffee? When did I start caring that the girl in Java Cafe made my latte with scorching hot milk, burning the coffee and making it undrinkable? WHY DO I CARE? I start to add another layer of self loathing into the cycle of mardy-bum whingeing. I am a wanker. Stewart Lee has made feel like a wanker. Fuck. That is actually genius.

All the petulant misery, all the moaning, all the self-loathing - it’s perfect. It’s the best possible way to frame the astonishingly good set of bands Lee, and whichever 'slippery cunt' books these things, has put together. When you see The Fall burning faces off and baffling with equal measure, with Mark E Smith opening the show by telling someone in the wings to “get fucked”, it makes sense. When you see Datblygu ranting in Welsh it means every bit as much as Sleaford Mods’ ranting in English, despite not understanding a word, and The Raincoats' grudging acceptance of the disappointment and tedium of the female experience actually works better in this environment than the focussed anger of the bands they inspired.

If the atmosphere of navel gazing petulance frames the grumpy contingent, it makes the detonations of real joy that pepper the weekend feel five times as exhilarating. It’s why the quietly angry, but always exuberant Josie Long is as sensible a piece of scheduling as The Fall. It’s why Blue Aeroplanes’ funky-dancing proper-indie, and Trash Kit’s sulky, twitchy, post-punk feel so irresistible. Why Shonen Knife were very nearly the best thing at the whole weekend. It’s why Charlotte Church completely owned Saturday night.

Charlotte Church deserves her own paragraph here. Fuck, she deserves her own article. I could write a novel about that performance. No-one is quite sure what to expect from this, she’s billed as ‘Charlotte Church’s Late Night Pop Dungeon’, and the general expectation is a DJ set of pop bangers, and a nice come down from a full day of creased brows and self-loathing. It isn’t a DJ set. It’s so much better. She’s put together a faultless band and learned a set of idiosyncratic covers, opening with the flashback music from Twin Peaks (she can still sing classical!) before - WHAT THE FUCK - doing Nine Inch Nails’ ‘Closer’, Bowie’s ‘Girl Loves Me’, Sugababes’ ‘Overload’, En Vogue, Basement Jaxx, Neutral Milk Hotel, Super Furry Animals… it goes on, and it is amazing. We’d spent two days being unceasingly annoyed: the glitter-bomb release was orgasmic.

You can pick a ton of holes in this ATP weekend (and everyone did), but when you step outside of the experience, when you appreciate it as a whole, when you remember Dutch Anarcho-punks The Ex’s astonishing saturday-night face-melter, or the irrepressible joy of Shonen Knife on Friday, or The Bell Rays' force-of-nature rock n’ soul party, it’s a hard misery-guts that doesn’t admit to an exhilarating time.

I don’t think Stewart Lee planned to aggravate his guests to the extent they’d force themselves into their own situationist art prank. I’d like to believe he did, but it’s unlikely. Instead the melting pot of farce, coincidence, anger and joy created that all by itself. A perfect storm. A unique alchemical reaction. We loved, we hated and, fucking hell, we moaned, but we also partied and came away richer for it. Well played, ATP. Well played.

In Photos: Animal Collective @ The Tr...