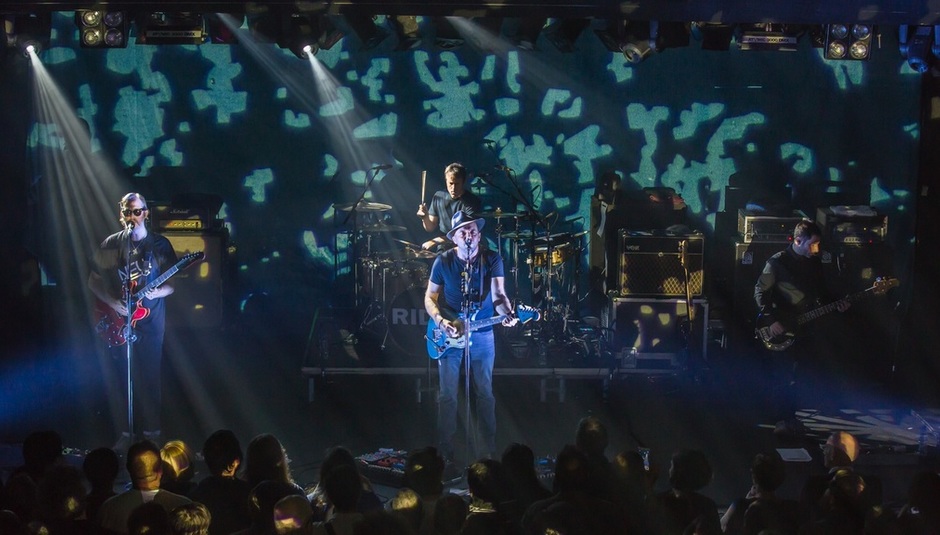 After the successful comebacks enjoyed by My Bloody Valentine and Slowdive in recent years, it was somewhat inevitable Ride would also return to the live circuit before long. Whether coincidental or otherwise, that they chose 2015 to reappear - 25 years after the release of seminal debut Nowhere - could be described as something of a masterstroke. Largely overlooked until recent years yet undoubtedly one of the most influential records of its time, the widespread recognition currently bestowed upon arguably the Oxford four-piece's finest hour is long overdue and thoroughly deserved.

Having been on a constant tour schedule since that incredible warm up gig in Oxford on Easter Sunday, they've been steadily building up to the UK leg which will see them perform Nowhere in its entirety for the first time. Nevertheless, tonight's show - some 24 years since their last visit to Nottingham's Rock City (Incidentally, Slowdive were the support act that evening) - isn't sold out as with many of the other dates on this tour. A sign of the recession hit times maybe? However, there's no less of a buzz emanating from those that have ventured out post-teatime on this bitterly cold Wednesday evening.

As with previous shows earlier this year, stories are swapped in the pub round the corner from the venue beforehand. See back in the day, the unadulterated success of Ride infiltrating the mainstream felt like an event that would never be repeated. One of "our bands" gatecrashing the music industry's private party. So when 'Leave Them All Behind' landed unceremoniously in the top ten during February of 1992 alongside such hallowed company as Kylie Minogue, Michael Jackson and errmm... Kicks Like A Mule's 'The Bouncer', it was something of an epiphany.

Of course, the foundations were laid over the two years prior to that. Having only released their debut EP in the January of 1990 culminating in the arrival of Nowhere just nine months later, it's testament to the band's prolific nature that record - as with the three EPs which preceded it - contained no filler whatsoever. A landmark release in many ways and one which paved the way for bands to form and create sub-genres of their own. That grunge and Britpop came along and dispensed with Ride might have been a sore point at the time, but nowadays looking back, how many bands today cite Stiltskin or Cast as an influence? Exactly.

So when the band announced they'd be playing two sets including the album in full this October it presented an opportunity for those completely enthralled by Nowhere to join in the celebrations. Say what you like about Ride and the genre they and their ilk spawned (and plenty have) but Nowhere is a timeless record that actually sounds as current today as it did a quarter of a century ago. What's even more interesting is that some of these songs rarely if ever featured in their live set first time around. So rather than replicating an album, it's given the band an opportunity to revisit and in some cases rework those compositions into other entities altogether.

Effectively supporting themselves this evening, Ride's first set offers a glorious passage through their back catalogue. Opening with the aforementioned 'Leave Them All Behind', albeit less raging and visceral than in its recorded guise. As an aperitif to Nowhere's main course it's a sublime entree. 'Like A Daydream' and 'Unfamiliar' follow suit, each providing timely reminders of what an incredible singles band they were from the outset. What is apparent, particularly during the Going Blank Again numbers, is how Ride rely more on melody than sonic brute force. 'Chrome Waves' and 'Mouse Trap' shimmer with elegant poise, while 'Time Of Her Time' announces itself inherently as the greatest single Ride never released. As with previous shows on the tour, the first set was a much quieter affair but no less invigorating for it.

Having partaken in a twenty-minutes long interval, the foursome's return is greeted by a halo of blue lights and deafening applause. From the moment the first few bars of Seagull kick in and announce Nowhere's arrival, it's clear from the outset Ride mean business. With the decibel count having risen several notches between sets, there's a growing sense of momentum onstage that transcends itself to the appreciative audience out front. "Now it's your turn to see me rise" sing Andy Bell and Mark Gardener harmoniously before they and their colleagues engage in one of many white noise segments bestowed upon us this evening.

As stated earlier, several of these songs had barely been played before this tour and one of those was 'Kaleidoscope'. Directly poised and heavy in execution, it's played with the dexterity and tenacity of a group of people clearly at ease with their lot. 'In A Different Place' and 'Polar Bear' bring a different complexion to the set. Each having been regular staples in Gardener's solo sets down the years, yet the latter is where the rhythm section of Steve Queralt and Loz Colbert dominate proceedings. And not for the last time, as it happens.

'Dreams Burn Down' brims with the same air of confidence as it did twenty-five years ago, Gardener and Bell's customary wigout taking it to the next level by its close. Another seldom played number from back in the day, 'Decay', also sounds fresh as a daisy. Driven along by Steve Queralt's bassline, it's the closest Ride get to one of their main influences The House Of Love and again becomes outer dimensional in the flesh.

Bell takes lead vocal on the poignant 'Paralysed' while buoyant levels of euphoria greet the opening notes of 'Vapour Trail'. The entire Fall EP is then given an airing but it's not chart bothering lead track 'Taste' that steals the honours, but the rarely aired 'Here & Now' instead. Once again featuring flawless harmonies from the two front men, its status firmly elevated from being one of Ride's great lost songs to a behemoth of their live set. Closing the set dramatically with an apocalyptic version of 'Nowhere' that threatens to lift the roof off Rock City, it's testament to the quality of Nowhere that none of the last three songs made it onto the original pressing.

Returning once more for an encore that takes in 'Drive Blind' and 'Chelsea Girl' off their first self-titled EP. Lesser bands would have taken the easy route and stuck to the formula contained on record. Not Ride. Instead, 'Drive Blind' has now become a noise-laden monolith with a middle segment to rival the infamous "holocaust" of My Bloody Valentine's 'You Made Me Realise'. Amidst the haze of reverb and distortion, drummer Colbert is the most animated, lurching to attack cymbals as well as skins with the panache of a jazz musician. It's an incendiary spectacle that lasts almost nine minutes, elegantly paving the way for 'Chelsea Girl' to turn the entire dancefloor into a celebratory moshpit.

Recently the band have hinted at the possibility of writing new material, and while that would be a welcome addition to their canon, it's safe to say their legacy was set in stone a quarter of a century ago. Nowhere, a modern day classic given a post-millennial makeover. Where most full album shows tend to be a tad predictable, this is anything but. An unmissable experience.

In Photos: Torres @ The Scala, London