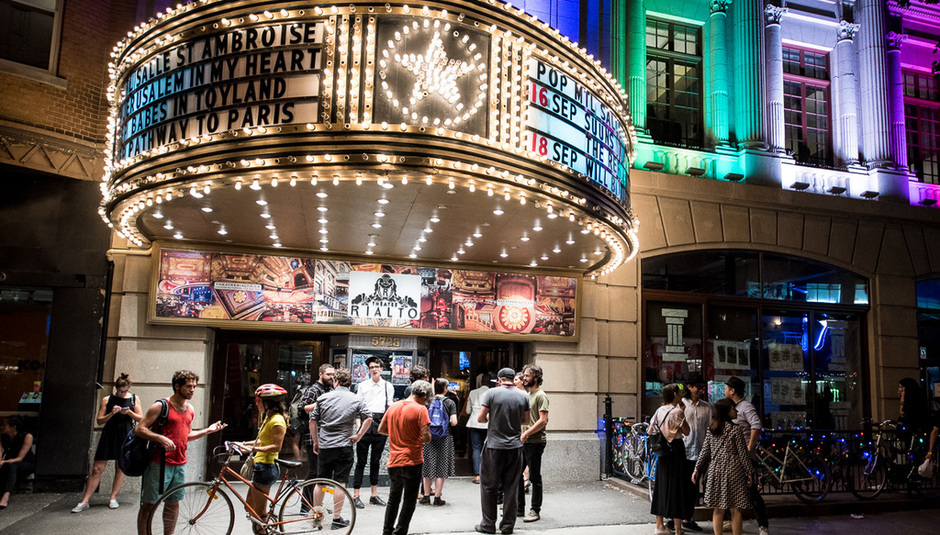 Owen Pallett’s scotch eggs are spot-on. The crumb is crisp, the meat is juicy, the yolk is soft and runny. The chef seems bemused as to why I’m so determined to ask him questions about his scotch eggs rather than, say, his solo albums or his work with Arcade Fire. But he hasn’t been sent to the Rialto Theatre kitchen to play music. He’s been booked to cook scotch eggs, in much the same way Steve Albini was booked to grill a hangar steak last year. This festival likes its food, and that’s one reason I keep returning.

Not that I need an excuse to visit Montreal. It’s a wonderful, unique city, and the perfect time to visit is Pop week in late September, the final flush of summer. After watching super-ish-group The Smiffs play ‘There is a Light...’ at 3am on a Sunday morning (kudos to Pang Attack’s Alex Hackett for playing Morrissey with such accurate belligerence) everybody heads home in the knowledge that Montreal can’t be arsed with autumn and within a few weeks, once the scale’s hit the high minus twenties, they’ll look back at the kind of sweltering heat that made Ought’s album release show feel like a Scientology drug rehab programme and long to be hot and sweaty again. Pop Montreal is the ringing of the last orders bell before a grim, all-penetrating coldness thrusts the city into collective seasonal affective disorder. It’s a time for pints on terraces, picnics in parks and Bixi bike-hire rides, which I rely on to navigate the festival’s 40 or so venues, from the dive bars of Boulevard Saint-Laurent to the even divier bars of Little Italy. One venue, Cinema L’Amour, is way beyond divey – it’s a historic theatre that’s screened pornography nightly since 1969 (see here for a short, mostly work-safe film) and Pop has hired the venue for a midnight screening of Showgirls. It’s an atrocious piece of filmmaking but it’s hard not to enjoy watching it in an audience full of people shouting its trashy dialogue en masse and whooping its dancer-not-a-whore protagonist through her flexible feats of high-octane dancing and swimming pool sex.

Back in the lobby of the Rialto, Win Butler sits underneath a giant neon souvlaki. He’s just come out of Owen’s kitchen, presumably returning the favour of playing on the Arcade Fire albums by mixing breadcrumbs or preparing sausagemeat, and he’s now being coolly ignored by everyone here, even though he’s basking in the glow of a specially commissioned Greek kebab. Inside the Rialto’s magnificent main hall, his brother stands onstage in a black jacket and bow-tie, flicking his hair away from his right eye with such regularity it’s tempting to give him some scissors to put him out of his misery. Will Butler sounds much like you’d expect him to, a pared-down Arcade Fire; catchy rock'n'roll tunes with big choruses. There’s so much energy onstage it feels like he’s kept his showmanship pent up for 15 years and it’s a relief to release it all at once. Upstairs in the same theatre a much-loved local band has roped in some pals and renamed itself The Besnard Lakes Are The 17-Piece Band for the occasion. The extra 13 musicians should make this a special show, but in a long, narrow venue where it’s almost impossible to see the stage, it feels like an opportunity wasted.

Precisely zero people stand between me and the stage at Barfly for Stanley Brinks – and I’m sitting halfway back. The audience totals six, not including the volunteer at the door or the sound guy, but including the four people at the bar watching the Denver Broncos beat the Kansas City Chiefs. It’s not right. The former Herman Dune man, who perhaps shot himself in the foot by choosing such a rubbish alias, writes sad, funny and heartwarming songs. An only slightly bigger crowd is turned into an advantage by BA Johnston, whose encore sees the entire audience squeezed into the women’s toilets. The Canadian musician, who couldn’t possibly be more Canadian (his hometown and the butt of many of his jokes is Hamilton, Ontario) can’t get over the fact that he’s been booked to play l’Assommoir in Mile End, a fancy tapas bar. He dismissively labels it a 'charcuterie', and the exposed brick walls and wood-panelled bar makes a gloriously incongruous setting for his frenetic outsider DIY pop. Vice called him Canada’s answer to GG Allin, but he’s more harmless clown than murderous maniac, shirtlessly darting around the charcuterie, force-glugging beers down throats and singing short ditties with titles such as 'Jesus is from Hamilton' and 'Nuke Toronto'.

Barcelona’s Joana Serrat is a more obvious match for this tapas bar, although there’s little Spanish or Catalan about her gently innovative Americana. Her debut was produced by local super-producer Howard Bilerman, who also produced just about every good record to come out of Montreal over the past two decades, and she’s here to work on a new album. Having to strain to hear her quiet solo set over the noisy diners only serves to make her music even more fragile, precious and alluring.

Elsewhere there are standout performances all over town. Built to Spill serve up a Keep It Like A Secret-heavy show complete with surprising covers of Blue Oyster Cult and The Smiths; the band formerly known as Viet Cong finish their set so relentlessly and furiously it seems totally unsurprising when the next day they officially retire their name; Malian singer-songwriter Vieux Farka Touré and New York singer Julia Easterlin put on a gorgeous show at the Ukrainian church, and there’s a charming acoustic set by LA folk singer Eleni Mandell in software company Ubisoft’s offices. And then there was a gorgeous set from Stars of the Lid, who I’d love to watch again with my full attention because on this occasion I couldn’t quite resist a spot of lucid dreaming.

If Pop Montreal 2015 is lacking one thing it’s a breakthrough local band, an act everybody’s going nuts over. Although there are well over 200 local groups here, nobody seems to be able to point towards the next Ought, Tune-Yards or Arcade Fire. Maybe there’s something to be said for having a diverse scene that’s not dominated by people trying to be the next Grimes or the next Mac DeMarco. The local bands I catch are a diverse bunch – from the blisteringly intense space-rock of Technical Kidman (yes, that is an attempt at a pun) to the old-school country stylings of Li’l Andy and the multilingual klezmer of Orkestar Kriminal. There’s something here for everyone. And there’s scotch eggs too. I’ll be back for more.