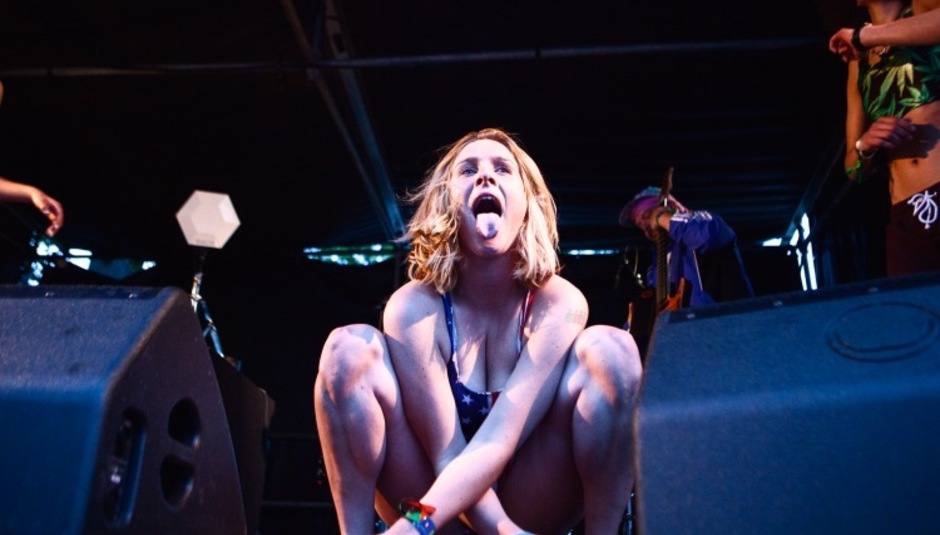 It is fair to say that summertime music festivals in Norway are both diverse and of a strong standard. The line-ups generally mix international acts with local ones in varying ratios, as you would expect. Each event has its own place and unique features, some of which can be very special indeed. In a country blessed with abundant natural beauty it would be a shame not to take full advantage of it. Undoubtedly, Slottsfjell succeeds in this regard.

The festival’s biggest draw is its location. Maybe not Tønsberg itself, although that is not so bad, but the parkland area in which it is situated. The stages located on the lower levels of the festival are pretty good but become almost ordinary once you take the trek up the stone staircase and rocky footpath to the summit of the hill.

Surrounded by water a few hundred feet below, it is not difficult to see why this was once a medieval fortification. An imposing stone tower commemorating this fortress now reaches proudly into the sky. As the sun slowly sets to the east, it illuminates the water and the hill in a golden glow. At times it becomes hard to work out whether the music is soundtracking the sunset or the sunset is a glorious natural accompaniment to the music.

London’s Jungle are the first band to prove this on the opening day, with their seemingly never-ending funk and soul show. An old music teacher of mine would often invoke the phrase 'repetition is good for you' and 'keep it simple, stupid' when briefing us on making our own music. Although what Jungle practice is far beyond the abilities of most 13-year-olds, they certainly take the first of these on board, although not so much the second. Even the blackest, darkest hearted human would have bobbed their head along to this. It is reductive to say it but some music just fits being outdoor in the summer, and this is it. Glorious.

But - it’s not all about the daytime music. What Norway has excelled in in recent years – and really some time before that, though more locally – is electronic music. It continues to grow and the main Norwegian proponents have become more renowned both at home and abroad. The enormous disused warehouse that goes by the name of Kastellnatt is a fitting home for Slottsfjell’s after-hours programme and, in particular, music of this type. With Todd Terje, we have perhaps the most famous Nordic electronic act of the last few years. Tonight he brings his live solo show (without instruments) to the main section of the warehouse. It is an intense affair; with the big tracks made bigger and extended to last what seems to be both eternally and transcendentally long time, yet somehow not quite long enough. Unsurprisingly, everyone seems to want more of ‘Inspector Norse’, whilst his collaboration with Lindstrøm (who plays the Friday here), ‘Lanzarote’, brings about a similar reaction, if a bit more low-key.

Whilst electronic music may be what Norway has become renowned for internationally, there is also a ton of hip-hop in various forms, much of it not in English. It’s not like many of them will extend their influence out of their homeland but that does not have to mean that they have no value. Sometimes it’s as much about how you say it as what you say. Plus, some many rap so incomprehensibly fast and in a local dialect that even some natives may have little chance of fully grasping the lyrical content. Of the local hip-hop contingent, by far the most interesting – aside from perhaps Arif having seemingly hundreds of fast-changing X-rated images projected during his performance – are the double female-fronted Kuuk (pictured). They provide the most aggressive, abrasive and captivating performance of maybe the whole weekend. The vocals are rough and gruff, the stage show full-on and entertaining as they bark and occasionally growl their words with mounds of menace and intent. You just can’t take your eyes of it. It is edgy – lyrics including “you are homo, you are hetero, you are trans” from what my rusty Norwegian helps me to work out – and very, very raw. But it works in its presumed intent, specifically not only being confrontational, but by shoving it down your throat too. Amongst the snarled lyrics, it is hard to tell if they are enjoying themselves, but they along with everyone else, seem to be having a subversive and chaotic ball. And why the hell not?

An hour or so before this, Dark Times brought a different, more introverted type of aggression to Tårnlunden. The trio roll through their short-and-brash hardcore punk with intent but in a manner not as engaged as Kuuk. You feel that in another setting at a slightly later time of the day, this would have the power to pack a real punch; somewhere with enclosed walls and a ceiling. But during the early evening: perhaps not so much.

A different form of abrasiveness comes with a Midlands accent, courtesy of Sleaford Mods, who offer many of the virtues of Kuuk but in a different form. It is a shame to see only an, albeit receptive, handful of people there to see Jason Williamson rant and rave but a few seem to be well into it, even if the references to skinflint Viz characters go over their heads. It is to be expected, though, given that this is an event attended by young Norwegians, many of them in their teens. They can’t be expected to relate to the in-yer-face realism of this duo. But who knows? It’d be an exciting world to live in if their appeal extends into the furthest corners of Europe. It is not impossible that their aggressiveness and worldview could transcend national boundaries. Don’t hold your breath, though.

Unfortunately the festival required a bit of rejigging on its third and final day due to very high winds, which affected the two hilltop stages. Losing those for the vast majority of the day is quite clearly less than ideal. Things did calm down a bit before the day ended, though. Fortunately for many fans of the Norwegian legends Motorpsycho, their show at the most picturesque Kastellescene goes ahead in what is still a fairly stiff breeze. Their heavy, semi-psychedelic rock is decent enough, being somewhere between early Metallica and Kyuss. The Norwegians go mad for it and maybe rightly so, in many ways it is righteous noise. Tonight they perform one of their classic albums in full, Demon Box, which I guess heightens expectations. Their general demeanour, stage presence and ability to have the audience in thrall with their music alone is noticeable and invaluable, especially at a festival with so many new acts learning their trade.

Other masters of these are Echo and the Bunnymen, who nail absolutely everything. Ian McCulloch has been doing this for decades and he offers a stark reminder why bands like his are invaluable. Maybe not as relevant as they were in the past but a thing of quality remains a thing of quality forever, and classics like ‘Lips Like Sugar’, ‘The Killing Moon’ demonstrate as much, as do more recent ones like ‘Nothing Lasts Forever’.

Footnote: Undoubtedly one of the more outwardly amusing things about Tønsberg at festival-time is the quayside in the early hours. Or even in the afternoon on a good day. In a roundabout way it is home to some incredible entertainment. At least if you like a fleet’s worth of drunken Norwegians in a variety of seafaring craft – a sickening number of yachts – not only dead set on getting as drunk as possible but also doing it whilst listening to the most obnoxious music, anyway. Still, who wants to get in the way of people having a good time? In festival-terms, if you did want a good time, you could certainly do worse than Slottsfjell.

The Singles: One Direction fan-please...