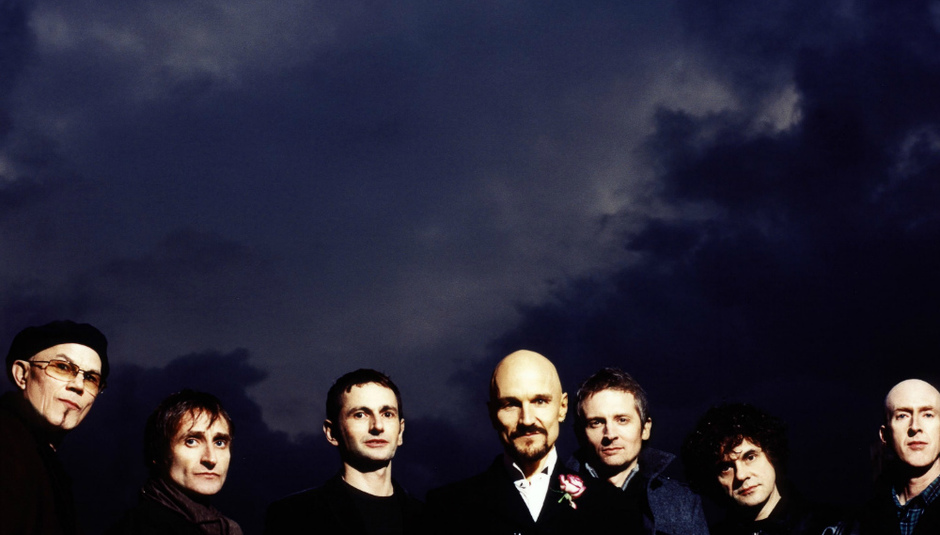 DiS meets James: "It always feels like we've got something to prove"

DiS meets James: "It always feels like we've got something to prove"

With album sales currently surpassing the 25 million mark, James can boast at being one of the most successful British bands of the past thirty years. Having originally formed in Manchester back in 1982, they've also retained the core of that line up, with founder members Tim Booth (vocals) and Jim Glennie (bass) still present today.

Last year saw them release their thirteenth album La Petite Morte, with a follow-up imminent as we speak. This summer they'll hit the festival circuit, and DiS caught up with the aforementioned Glennie and guitarist Saul Davies - himself a member of the band since 1989 - prior to their early evening set at Nottingham's Splendour.

DiS: You're playing a number of festivals this year besides Splendour. Is it something you've grown accustomed to over the years?

Jim Glennie: Yeah, we're playing quite a few festivals this summer, as with most years. We've got used to doing the festival circuit now. Except this year we're also trying to record an album at the same time. We came straight from the studio today, then we're rushing back there tonight after we've finished. Which I guess throws a few complications in the mix.

DiS: Your last album La Petite Morte came out last summer. When can we expect the new record? Is there a concept running through the album as with its predecessor?

Saul Davies: I wish there was more of an idea with it to be honest. So no, not really. I don't think we've got a particularly defined sound, which is why every new record has been different to the last one. Because most of the songs are written by us all getting in a room and jamming together, we tend to touch on a lot of different things. There's no plan as such. One day I'd like to think maybe we'll sit down together and devise a plan to make a record specifically about something.

DiS: What's inspiring you at the moment?

Saul Davies: It could be anything really. Whatever bores you, amuses you, lots of things. If you try and force yourself to write there's a mixture of fear that you won't get anything yet also a sense of wonder that you're still doing it. Some of that can breed inspiration. Same with things that are happening in your life. It's really hard not to bring that into the mix. I guess that's Tim's part of the process to bring the lyrics to what we're doing as musicians but even then it can be hard to separate music from real life, only in a much less obvious way.

DiS: How does the writing process manifest itself?

Jim Glennie: There's five of us that write, so we just get in a room and improvise. We set up the studio to record, and we also tend to get a drum machine going. Then the process starts. Everybody joins in and there's a lot of shifts and changes. Tim usually sings phonetics. Most of the time we think he's singing words but they're not. They're just a range of sound levels. Occasionally he'll fire a phrase or a line out. Sometimes it can be nonsense, other times it could be the beginning of the lyric. More often than not though it tends to be phonetics where he's using his voice as an instrument. He's looking for melodies. We're all very supportive so we all tend to listen to one another. Then we try to pick out the main bits we want to mould together into a song. So instead of being free flowing there's a lot more of a process involved. Which means more work so everyone starts arguing about it, yet once we start playing everything is fine. It's probably very unconventional but that's how we've always worked. It's worked for fourteen albums so why change now? And it is amazing fun to go in with nothing and then something emerges over time. Songs lift off in front of you. It's not something we take for granted and same as Saul said earlier, there's always nerves and an element of fear because technically there is no thought process. It's always at the back of our minds that one day we'll go in and nothing will appear. It's odd because I don't think we've ever bumped into anyone else who writes like this.
Saul Davies: I'm surprised more people don't to be honest. I might be wrong but I suspect a band like Sigur Ros might take a similar approach? I would imagine they record everything then mix and remix it really well before deciding on whether it's right or not.
Jim Glennie: I sometimes wish we could do things as straightforward as that. There's something to be said for being able to lock yourselves into your own little world and not really reference anybody. You end up being your own little unit. There must be some influences in there from somewhere, but at the same time making a conscious effort not to get too embroiled what's currently knocking around. It's difficult to get your head around, but then also probably explains why a band like Sigur Ros has existed on their own terms for so long.

DiS: James have never really embraced a particular scene either. Would you say that's one of the reasons why you've been around so long?

Saul Davies: I would, definitely. And it's worked. All those years we spent denying we were ever part of the "Madchester" scene. We were happy to say we came from Manchester but we were never part of that. There was a scene there, definitely. It wasn't just a media hyped thing even though we probably said that it was at the time! Manchester had a lot of great bands around that time who weren't really part of that scene. Bands like A Certain Ratio, The Fall, Durutti Column, The Railway Children, loads. It's sad that some of those get forgotten about when people talk about the Roses and the Mondays because there was so much more going on. James started in 1982 and it was only after 'Sit Down' became a hit in 1991 that more people began to notice us. The first nine years of the band's existence were quite tortuous really.
Jim Glennie: We've always been bloody minded and wanted to do things our way. That's given us the freedom to be who we want to be. I'm not saying that's always necessarily helped us, but it's probably one of the reasons why we're still here today. Even when we play live we do exactly what we want. We don't ourselves as a heritage band just there to play the hits. There'll be a few new songs in the set today.
Saul Davies: Sometimes I do wish we had more obviously influenced people. I know we have influenced people but it's not like we're the type of band people tend to namecheck. The other day I heard a track by Wolf Alice called 'Bros' and it sounded like it could be a James song. I don't mean any specific James song but it sounds like a modern recording of us. It sounds like a very contemporary recording of something we'd have done twenty years ago. It's very likely they don't know those reference points so I don't think it's deliberate, but I honestly thought if Tim was singing it could easily be a James song. The interesting thing is we've moved away from that sound. We're a lot darker now, less chimey. Whereas that song is very chimey like the James of old.

Saul Davies: Well everything is influencing everything else but I thought that was quite funny.

DiS: So what is the key to James' longevity?

DiS: Next year will be the 30th anniversary of your debut album, Stutter. Are there any plans to commemorate that? A tour maybe?

Jim Glennie: Really? I didn't even know it was thirty years since that came out! We haven't talked about it, probably because we'd all forgotten.
Saul Davies: That's interesting because the other day it occurred to me that next year it will also be the 25th anniversary of 'Sit Down' reaching number two in the charts. Apparently Absolute Radio played it nine times over a seven day period the other week, which is the equivalent number of plays to being on Radio One's a-list. But then I guess the reason for that is it still sounds so fucking good! Maybe we'll do something to commemorate that instead?
Jim Glennie: Commercially that's probably what we should do, but then knowing how bloody minded we are a Stutter tour seems more likely.
Saul Davies: Unless we ask Wolf Alice to record a version instead?

For more information on James including tour dates and forthcoming releases visit their official website.

Remembering Mountains: A Tribute to K...