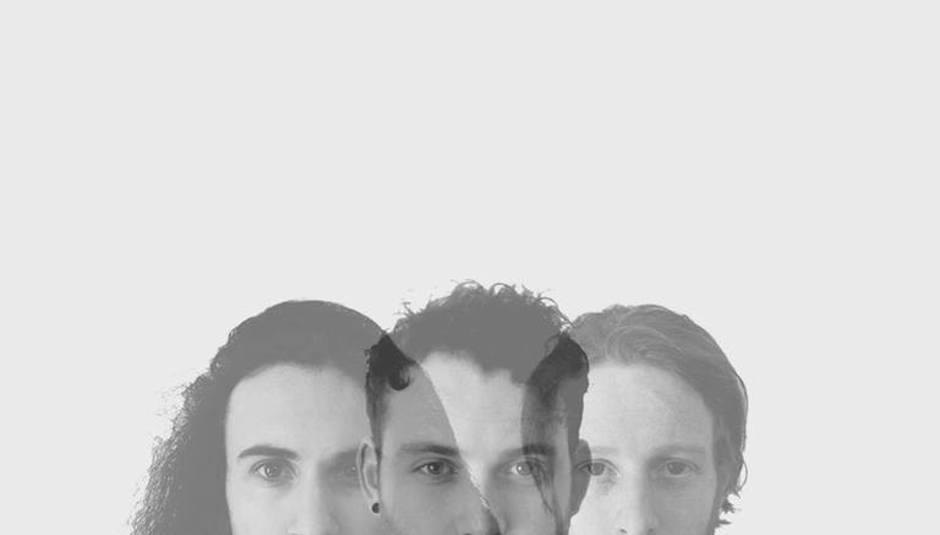 Eyre Llew are one of the most exciting new bands to emerge from Nottingham's currently thriving music scene. Despite only forming a year ago, the trio have become one of the most talked about acts in the city. Initially conceived as a studio project by multi-instrumentalists Jack Bennett, Jack Clark, & Samuel Heaton - they also have their own studio BSV -
the group have already released four singles through their own Bandcamp page. The first of those, ‘Mortné’, released last October set the scene for their experimental ambient passages and each subsequent release culminating in February's poignant 'Lunar' has documented their progression both from a musical and arrangement perspective.

They only played their first live show in May, and are still in single figures when it comes to performing in the flesh. Nevertheless, those shows have only served to highlight the band's potential. Later today they'll play only the third show in their existence at Nottingham's Splendour festival. Beforehand, DiS got the lowdown on the band's origins, expectations and what it's like to be an integral part of Nottingham's creative hub at this moment in time.

DiS: You've been together less than a year and are only playing your third show today.

Sam Heaton: Our first outdoor festival as well. The second show was at Dot To Dot, which again being an indoor festival was a lot different in terms of soundchecking and stuff like that.
Jack Bennett: We literally load on and then play. It's a case of give us some reverb and we'll do the rest!
Jack Clark: We specifically chose a set to play today just to suit the outdoor atmosphere.
Sam Heaton: It consists entirely of new material.

DiS: So there's nothing you've played at the previous two shows?

Sam Heaton: Sorry, yeah there's a couple of songs in there we played at our first show in May and Dot To Dot. What I meant to say was nothing we've released so far.

DiS: You've done things the opposite way round to most bands by playing your first shows at festivals before going on tour. Has it been daunting so far?

Sam Heaton: I don't really know. Obviously we've not toured in Eyre Llew so it's difficult to compare. We're still trying to get to grips with everything.

DiS: Are you surprised at how quickly things have progressed for the band since forming last August?

Jack Clark: I'm quite surprised with the amount of support we've had. We never thought we'd be playing festivals like this at this stage.
Sam Heaton: Maybe next year, but not yet.
Jack Clark: Dot To Dot was only our second show and we were on quite early yet I remember looking up and seeing the room was packed.
Sam Heaton: It's nice to know there's people that like the same kind of things as us. When we first started out and recorded our first single, we thought what we were doing was very niche but I think from the response we've had so far there's a feeling our music may transcend to a wider audience.

DiS: You've had unanimously positive reviews from all sections of the media so far. Do you pay much attention to what other people are saying or writing about your band?

Sam Heaton: We see quite a lot it but we tend not to pay too much attention to what people are saying about us whether it's good or bad. It's best not to take too much to heart. We're just going to carry on working as we always have done and if anyone has any good advice we'll take it. Whether we act on it is another thing.

DiS: I remember seeing an early review which compared you to Coldplay, which probably isn't the most accurate comparison when all's said and done.

Jack Bennett: I can understand why some people might think we sound like that. We obviously think it's..?
Sam Heaton: I don't necessarily mind too much if someone wants to compare us to Coldplay. Particularly if they see some potential in us that we might not recognise. Coldplay are one of the biggest bands in the world and if we can reach anywhere near that kind of status I'll be infinitely happy.

DiS: How would you describe your sound? Where would you categorise Eyre Llew in terms of genres?

Sam Heaton: For the early singles we used to say we were ambient acoustic. Since then we've added a lot more electronic elements to our sound so I guess we're still ambient but in a rockier sense. There's elements of post-rock as well.
Jack Clark: To be honest, we try not to pigeonhole ourselves too much because we like the idea of being able to move between certain genres without being restricted.
Sam Heaton: We've never written with the intention of sounding like any particular genre.

DiS: With things having moved so quickly over the past year, where do you see yourselves in twelve months time?

Jack Clark: We'd like to have a physical record out, whether it's an album or an EP.

DiS: Have you been approached by any record labels regarding future releases?

Jack Bennett: So far we've released everything ourselves.
Sam Heaton: We've been approached by a few people, both from a label and management perspective. So far we haven't committed to anything.
Jack Clark: We just want to test the water for now and see where everything goes.
Sam Heaton: We're still trying to work out our live performance. I think it's more important to stay focused on what we're doing rather than whether other people are showing an interest. Maybe we'll see some development from that in the future, but nothing's concrete at the minute.

DiS: When are you hoping to release your next record?

Sam Heaton: We've got a couple of possible singles that we might release separately or combine into an EP. We're just waiting on videos, mastering and production at the moment. All of the songs in our live set are geared towards making an album eventually, so we just have to start planning for when we're going to record that.

DiS: Have you set any timescales for the album?

Sam Heaton: We'd like to get it recorded before the end of this year.
Jack Bennett: Then hopefully released relatively early in 2016.

DiS: You're based in Nottingham at the moment. Would you be prepared to relocate if necessary?

Jack Clark: I don't want us to be one of those bands that gets a modicum of success then moves down to London. It's not what I want to do at all. Nottingham's been really good to us, and I don't think it really matters where you're from as long as the music's good.
Sam Heaton: You can drive anywhere, you can gig anywhere. Nottingham's quite central so there's no reason why we'd need to move. It would have to be for the right reasons if we ever did. At the moment I can't see one.

DiS: Aside from writing and recording, what are your plans for the rest of this year? Will there be more shows?

Sam Heaton: Yes, our next show is in August at Nottingham's Riverside Festival. We're playing on the bandstand there so quite looking forward to that. Then we've got the Waterfront Festival for I'm Not From London Records which should be quite cool. After that we're playing on the acoustic stage at MacMillan Fest, and then we're off to Manchester for A Carefully Planned Festival.

DiS: Are there any other new bands you'd recommend Drowned In Sound and its readers should check out?

Jack Clark: We saw Keto earlier and they were great. Also Suspect Alibi and Field Studies too.
Jack Bennett: We recorded Field Studies last single in our studio. That was a lovely day. We just sat down with a few beers and bashed out the song. It was really pleasant.

DiS: Do you see yourselves working as much on the production side in the future as well as playing in the band?

Jack Bennett: I don't think we see ourselves as just a one-trick pony with the band. We have dreams of going into film score composition. I think we're very dynamic in terms of the music industry so we try to do a little bit of everything here and there. Plus it keeps things interesting as well. We don't just stick to one genre and we don't just see ourselves as writers and performers either. I do a lot of mastering which keeps me on my toes.
Sam Heaton: And I think that opens a lot of doors in terms of other areas of the creative arts. For example, I've been composing music for dance students at University. I guess each individual aspect forms its own part of the overall journey.

DiS: Even though you're a three-piece there's so much happening on stage with various instruments being swapped mid-song and such like. Would you ever consider bringing more musicians on board or collaborating with someone else in the future?

Jack Clark: It is something we've talked about, using session musicians. One of our ambitions is to play with an orchestra.
Jack Bennett: I don't think we'd ever allow anyone else into the band as a permanent member. I think that would dilute what we already have. We've found a really harmonious equilibrium of working with each other and I think getting someone else in could destroy that dynamic somewhat.
Jack Clark: Also, who would we need at this moment in time? Again, it would have to be for the right reasons and I can't see one right now as we're really comfortable with what we're doing. Session musicians, absolutely. When we put on our own show we'll probably ask a few friends if they'd like to join in. Maybe get someone to play bass on a few songs or add orchestral parts here and there.

DiS: When are you planning on doing that?

Sam Heaton: We've got a few ideas for the autumn. Nothing's concrete yet. We're still brainstorming.

DiS: You've all played in other bands previously. What would you say is the difference between then and now?

Jack Clark: I think we're a lot more mature.
Sam Heaton: It's a completely different scene. Also, I personally care about what we're doing. If I'm going to put something out for other people to hear I want them to enjoy it. There has to be a degree of integrity behind it where I'm proud of what we've achieved at least. I think it's important how that reflects on us as a band and how we portray ourselves.

DiS: What advice would you give to a new band that are just starting out?

Jack Clark: Don't be scared of originality. If you want to write music purely with the intention of being the next Arctic Monkeys or whoever then you'll only end up going so far. Whereas I think if people see or hear something that sounds quite different they're more likely to be impressed if only by the bravery of it.

Eyre Llew are currently scheduled to play the following...

For more information on Eyre Llew visit their official website.