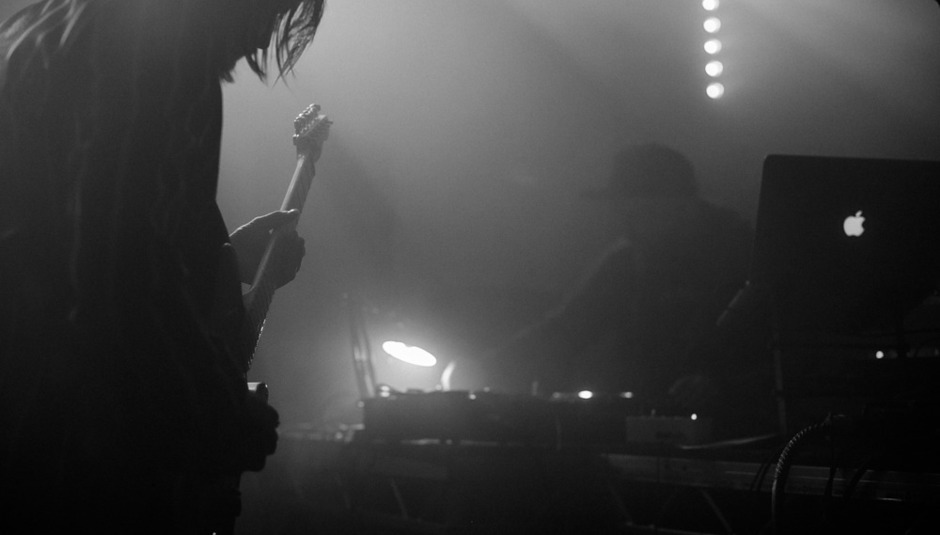 About a 40-minute north-easterly drive from Digbeth, Birmingham, the Download Festival is taking place, boasting a line-up that includes Slipknot, Lamb of God, Marilyn Manson, Judas Priest and the devil-worshipping, church-burning, riff-mongering, bat-eating, blood-raining slayers of false metal, Muse. But were any of those groups as H E A V Y as Supersonic’s The Bug? I sincerely doubt it. The bearded and be-hoodied Kevin Martin stood surrounded by intimidating desks of noise-making equipment, bathed in red light and blindingly thick clouds of dry ice. For the first part of the set he was joined by Earth’s Dylan Carlson and at colossal, chest-rattling volume, the dub/techno/desert-drone duo undertook a reconstructed and gratifyingly elongated version of last year’s impressive collaborative EP, Boa/Cold. Carlson’s guitar sound proved different again from both the clean tones of Earth’s 2005-12 post-spaghetti-western period and his recently-resurrected distorted rock fuzz. This sat somewhere between the two, with a buzzingly industrial feel to fit Martin’s industrial beats and apocalyptic effects. Eventually, Carlson vanished into the red smoke leaving Martin to up the tempo with a couple of solo pieces while awaiting his second guest. Because of the lights and the mist, rapper Flowdan was little more than a silhouette, but a silhouette with a damn powerful presence, deep, authoritative voice and fierce rhymes. The appearance of his outline and sound of his booming voice shook the gig into its third and final stage, a full-bore dance-and-bounce-and-sway-like-there’s-no-tomorrow-let’s-just-go-proper-apeshit affair. Taken as a whole, the set was a miraculous meeting of musical worlds and further testimony of Martin’s unquestionable genius. We should build statues of The Bug and his collaborators in the squares of our city centres. They might have to be fairly abstract statues, mind, ‘cos it’s so hard to see what any of ‘em look like.

The day before, Ravioli Me Away had kicked things off in style. With their stand-up, singing drummer clad in shades and a baseball cap, sci-fi-visor-headed bassist and some sort of robo-voodoo-priestess on keyboards, these jazzy, mechanically-funky neo-post-punkers announced themselves as modern heirs to The Slits’ crown.

Mark Stewart, frontman of the recently-reformed original post-punk outfit The Pop Group, prowled the stage, spitting out lyrics, his ranting attitude slightly undermined by the habit of having to read some of his words from sheets on a traditional music stand (a practice I believe Robert Smith of The Cure once said was almost as shameful as miming). That ranting Sleaford Mods bloke doesn’t have to do that. As he demonstrated at last year’s Supersonic, despite simultaneously swaggering around, swigging tinned beer, scratching at his skull and berating his own audience, Jason Williamson never fluffs a line. And he don’t need no poxy music stand. Maybe he will as he gets old(er). Stewart’s still got a decent scream on him, though. Less reading, more screaming, that’s what I say. As for his backing band, well, those hoping for something more primal than professional may have been disappointed. They stood there calmly chugging out non-chaotic licks with the polite air of session musicians. Less provocative punk primitivism than Public Image Ltd proficiency, perhaps.

It’s not like Ela Orleans moved around much either. The Glasgow-based Polish musician stood behind a table dressed in a formal shirt and tie. However, the sounds she made were both exquisite and exciting, whether leaning towards avant-garde electro-soundscapes or skew-whiff pop songs. Orleans describes her songs as “movies for ears” and they really are that captivating; thought-provoking, emotion-stirring ear-films that you’ll want to experience over and over again, as opposed to the blockbuster CGI superhero reboot that was The Pop Group.

Over in the auditorium, The Quietus’s John Doran guided us through some of the themes of his new Jolly Lad book - childhood, music, time, alcohol, U2, drugs, black holes and the Salford-based experimental collective Gnod - and then tried to hypnotise us with a drone-backed spoken-word piece like Paul McKenna with a Hawkwind fixation. I don’t know if it worked, and I can’t quite remember what he said, all I know is that I’ve just ordered 17 copies of his memoir and have absolutely no regrets. Next, Rob Chapman waxed lyrical about only a handful of the copious aspects of Sixties psychedelic music that are covered in his forthcoming book, Psychedelia and Other Colours, explaining white- and African-Americans’ very different takes on turning on, tuning in and dropping out, the legacy of LSD in children’s television and why, although he disagrees with them, he’s always got time for anyone with a valid reason for hating The Beatles.

There could be no band better suited to follow hypnotism and psychedelic chit-chat than Eternal Tapestry and it was a shame that the lysergic Portland rockers didn’t just keep jamming on until we lost all sense of time, space and ego and our multi-coloured brains started leaking out of our ears and our heads transformed into those of fluffy, antlered animals and the world became a sort of grown-up version of Teletubbyland and none of us ever felt pain or hunger or sadness again. Still, it was good while it lasted.

A darker take on psychedelia was provided by Six Organs of Admittance, whose Ben Chasny recently unveiled his new chance-based method of musical composition. The ‘Hexadic System’ involves using playing cards and special charts and things to forge new paths in structural originality. What that apparently led to was a set of heavy-rocking, skree-ridden, feedback-drenched mega-riffs that escalated for about 20 minutes before Chasny sung anything even slightly resembling a 'verse'. It was a lot of noisy fun and, eventually, Chasny was benevolent enough to treat us to a rendition of his more immediately palatable pre-Hexadic space-rock tune ‘Even If You Knew’.

Invigorated by his tarot-like approach to tunesmithery, Chasny’s vigorous jerking around the stage contrasted starkly to the sheer motionlessness of Liturgy. Murder, arson and vandalism aside, wasn’t black metal, ultimately, supposed to be a bit of a laugh? Liturgy weren’t having a laugh. They looked kinda bored. They didn’t even look angry. They weren’t pretending to be angry. Or wearing scary make-up. Or dressed as tree-wizards. They looked like black-clad crustie shoegazers. Perhaps they’d hypnotised themselves and were lost in their own parallel dimension of musical meditation. Their arthouse black metal shtick can feel pretty transcendental if you close your eyes and succumb to the guitar walls and burst-beats, but if you make the mistake of actually looking up at them, the band’s intellectual aloofness can come across as apathy, an apathy that infects the audience in turn.

Of course, all apathy was evaporated as soon as The Bug took the stage with his metal-dancehall-grime fusion H E A V I N E S S. By my calculation, this is the fourth time The Bug has played Supersonic (he was there at the very first one in 2003) and, although the festival is correctly committed to diverse, mutating, never-the-same line-ups of weird and wonderful newcomers and cult old-school oddballs, can’t we have an annual Bug Supersonic residency? To Bug or not to Bug, that is the question.

Photo of The Bug vs Earth by Joe Singh

Posh toppings and no base: DiS does t...