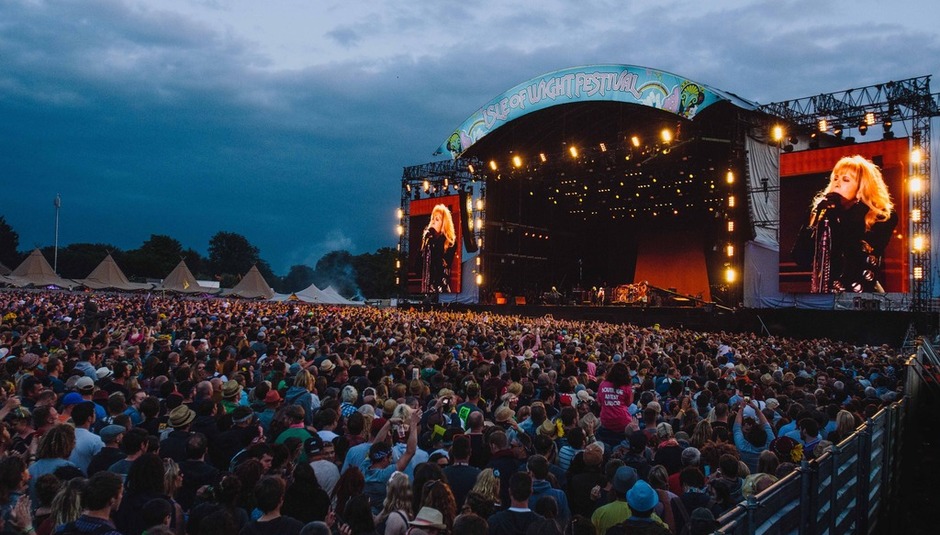 Posh toppings and no base: DiS does the Isle of Wight Festival

Posh toppings and no base: DiS does the Isle of Wight Festival

The rumour mill on the Island has gone into overdrive: 'I was in a pub with one of the organisers, and he said the band had a big falling out and split up!' one punter tells us, while another maintains a less juicy theory: 'I heard one of their technicians was sick'. They’re talking about Fleetwood Mac, who have cancelled the previous two nights of their increasingly ironically titled ‘On With The Show’ tour, casting doubt over their Sunday night headline set here. Blur’s Saturday performance has a question mark over it too, with Damon Albarn reportedly having lost his voice. This is a potentially massive problem, because without the headliners the Isle of Wight Festival really doesn’t have much left.

This is a festival defined by its competitors- It shares an island with Bestival, yet doesn’t have that event’s immaculate top-down curation and creative spark; it shares a first-festival-of-the-season weekend with Download, but doesn’t have its 'gathering of the tribes' sense of community; and it shares a cross-genre, cross-generational audience with Glastonbury, but has none of Worthy Farm’s scope or spirit. What IoW has instead is headliners - massive ones. Everyone wanted Fleetwood Mac, IoW got them by adding zeros to the cheque until they said yes. Blur and Friday’s closers The Prodigy can’t have come cheap either. The mainstage undercard is no less starry: Black Keys, Pharrell Williams and Paulo Nutini are all arena-fillers in their own right - the problems come when you look below them and realise there’s very little of else of substance.

Thankfully all three headliners make it to the stage and more-or-less deliver the goods, meaning the festival is at least a success on its own terms. Standing in the mud watching a soggy Prodigy jam ‘Ibiza’ with Jason from Sleaford Mods may not be everyone’s cup of tea, but Blur are marvellous. Material from this years’ The Magic Whip and the more esoteric corners of their back catalogue (‘Trimm Trabb’, ‘He Thought Of Cars’) seem a little lost on this most mainstream of festival crowds, but the big hitters, your ‘Parklifes’ and your ‘Song 2’s’ do the business, and ‘Tender’ and ‘The Universal’ are definitive, sob-wrenching festival anthems. Fleetwood Mac, too, are pretty much what you’d want them to be (minimum requirement: together on the same stage,) some crowd banter betrays the wear-and-tear of being repeated line-for-line every night for six months, and Stevie Nicks’ trademark swirling comes across less Seventies-free-spirit and more mad-woman-in-the-attic, but the hits keep on coming: ‘The Chain’, ‘Everywhere’, ‘Tusk’, ‘Big Love’, ‘Little Lies’, ‘Rhiannon’, ‘Landslide’, ‘Dreams’, ‘Go Your Own Way’, ‘Don’t Stop’. It’s a flawless festival set, and on ‘Gold-Dust Woman’ the old chemistry is recognisably there. If it’s the last we see of them, hell, at least we have seen them.

Where IoW falls down is on pretty much everything else. In a festival landscape where Glastonbury’s multi-faceted, ultra-creative ethos is what everyone aspires to, the Isle of Wight Festival feels at least ten years behind the times, a throwback to the days where raving in front of the Joe Bananas stall passed as between-band entertainment. There’s nods to comedy and cabaret, to installations and themed areas, but there’s no real commitment to these things, which would be fine -this is a music festival after all, not an arts fair- if the lower end of the bill was better put together. Sadly once you get past the big names on the mainstage, and a smattering of old reliables heading up the Big Top (Ash, The Charlatans, The Lightning Seeds, Paul Oakenfold, The View. a Groove Armada DJ set) there’s very little to get excited about. It all feels so haphazard: dull Radio 2 indie-rock fare like Sunset Sons bumps against bonkers been-around-for-years electro veterans Chicks On Speed on the same stage, in the same hour. You might come across something immensely likeable, like scruffy indie kids Sugermen, or the mesmerising soundcapes of D R O H N E, wasted on an audience of five punters (and one ‘refreshed’ 6Music DJ) in the far-flung Hey Joe tent, but equally you could walk into something as bland as Coasts, a group seemingly put together with the sole purpose of syncing adverts and soundtracking emotional bits on Made In Chelsea. There’s no method to it, nothing feels thought through, nothing guides you to the new music you’ll actually enjoy. Compared to how well Rob Da Bank sculpts the Bestival line up, this feels almost pulled out of a hat at random- one band from the Radio 2 playlist, one from the Radio 1 playlist, one from NME’s Radar section, one Kiss FM DJ, and another 40 acts booked to keep agents and record companies sweet so they’ll give you their top drawer names. Nearly all the money is spent on the big guns, with what’s left spread very thinly beneath, like a pizza that’s all posh toppings and no base.

In comparison to the great Isle of Wight Festivals of 40 years ago (which incidentally have no links at all to the revived version) and in contrast to pretty much all the comparably sized events in the UK, what’s lacking here is character and purpose: an identity. It doesn’t seem to be for anyone, and by trying to appeal to as wide an audience as possible, appeals to no-one specifically. That makes for a confused, occasionally boring, occasionally brilliant, and frustratingly top-heavy event.