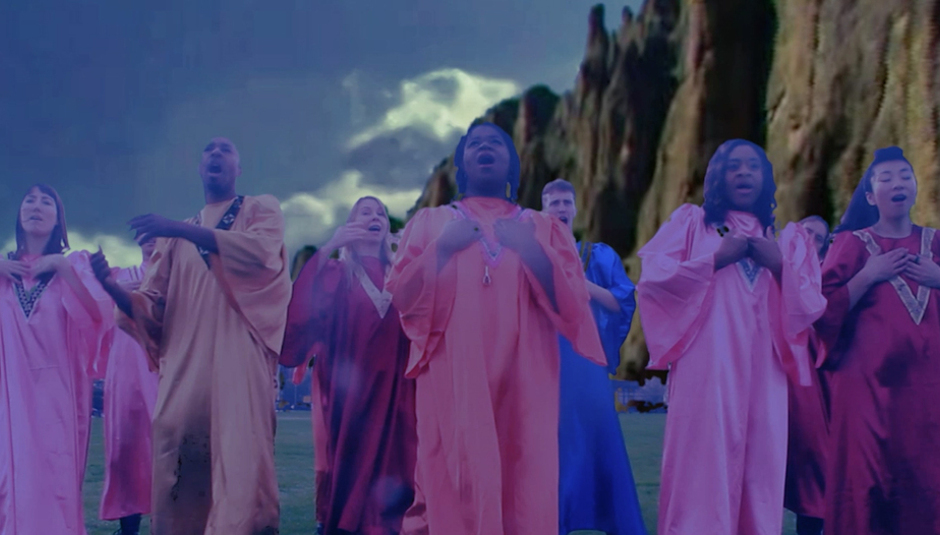 The Go! Team made an impact, a huge impact, when their debut album, Thunder, Lightning, Strike came out 10 years ago. It was a burst of technicolor fun that had an unabashed pop heart and a love of distortion. Considered the indie club DJ’s nightmare, as the treble had to be taken out of the mix entirely, it was two fingers up to both saccharine dance pop and moping guitar drivel. It was new with a sense of funk that came from the bloc, not the institute.

This has remained the DNA of the band’s genesis Ian Parton, but he’s slowly and softly branched away from the skip-rope chanting. The band’s second album took a far more brazen approach to distortion whilst the third, Rolling Blackouts, injected a plethora of huge vocal hooks into each track. The output was suddenly a chain of choruses threaded together with noise. It’s this hunger for hooks that has similarly driven the new album, The Scene Between.’

If anything, the desire to push the songs front-and-centre is bigger in The Scene Between and has caused the most dramatic personnel flux yet, as vocalists were sourced to provide particular tones and accents, and this will be reflected in the live band who make their UK debut on June 17th at London’s Village Underground. With the album out, a chat with Parton reveals that, probably, this is the album that most honestly reflects him as an individual in both style and approach.

“I think ‘The Scene Between’ hasn’t got the… it’s not as much a zeitgeist piece as ‘Thunder, Lightning, Strike.’ It’s all about song-writing, that’s what this album’s about. I think it’s an album you actually want to listen to, rather than an album where you’re being shouted at. The other albums might be guilty of being a bit of a hard listen, potentially, but that’s what I was going for at the time.”

“And it’s different for other reasons. As a band we’d agreed to stop touring a few years ago, just because it was getting so fucking hard; babies, jobs, side projects. We’d kind of whored ourselves over ‘Rolling Blackouts’ as much as we could. It naturally came to an end. Then the question was, ‘does the Go! Team carry on?’ But basically I ignored that question and carried on writing music not knowing if it was going to be called the Go! Team or whether it would be known as a new ‘pop combo’. I put that question off and carried on writing things and hoarding things, listening to records all day, thousands of them, listening for bits of inspiration.”

“I’d grab little musical sounds that I liked, put them in a pile and at the same time I was writing my own melodies with an eye to having an album where I wrote songs that I really dug and then built them, chord by chord, from these samples. I’d get a G from here and a D from there. I got on with the business of doing what I wanted to do. Which was to write catchy, well not catchy, but songs that earned their right to exist; undeniably nice melodies but hopefully not in an obvious way.”

Listening to the album, the first trio of songs alone (and each song on the album has had a video made for it) demonstrate how perfectly the music and vocals are paired. The typical cinematic riffs are there to soak up the sports royalties (‘The Scene Between’) and a giddy sense of euphoria pulses through each track (the raucous bass and sweet vocals in ‘Waking The Jetstream’), and the tunes… it’s chorus after chorus, no verses. Verses are filler. This may have been ‘built’ but there’s no clunkiness here just pure flow, front to back.

“That’s my thing. Make everything count. Everything is like a greatest hits of every idea I’ve got. I cram all my best stuff into everything so even my middle eight, I try and make sure that’s catchy as well. I do like the idea of not knowing what the chorus is. I think it’s, not that Abba is an influence, but you could say that about Abba couldn’t you? You don’t really know what the chorus is. Similarly I’ve always really loved curvy, kind-of-melodic-but-kind-of-unexpected melodies and hooks. That’s what I was really hunting out as I felt there’s only so far I can really take the ‘sample, stick a beat on it, stick a chant on it’ and call it a song approach. So I was trying to move away from that because A, we’d already done it and B, this was harder, to write actual songs. That’s what happened.”

With a meticulous approach and a hugely ambitious criteria to fulfil, it’s unsurprising there’s a four year gestation period for the album, with fatherhood kicking in as well. Ian became a dad six years ago and his son Franklin is slowly starting to influence, and be influenced, by the Go! Team.

”Fatherhood’s good. Franklin’s a bit like a sounding board in a way. Sometimes I’ll hear him singing songs around the house and I’ll think; ‘hmm, that’s interesting’. The hit detector kid test. He’s kind of grasping the idea of what I do for a living now and getting more interested in it. It’s good fun. That’s the part that people don’t actually talk about as much, that parenthood is actually a good laugh. You can just act liked a gibbon and get away with it; go to the park and play with lego and shit.”

“Working the way I did for ‘The Scene Between’ is a slower process, moreso now… but I’m always slow. I’m a slow motherfucker. I never write a song from start to finish. I grab an idea from five years ago and put it next to an idea I’ve just done, then stick in a middle eight from two years ago, you know. It grows outwards. For this album I had to track down singers. Each song needed a different kind of a voice. So I don’t really make life easy and it was done in stages, I imagined what I was looking for vocally and then put the hours in listening to loads of bands for singers.”

The Scene Between is out now on Memphis Industries.

Related: Stream the reimagined version of The Scene Between, here