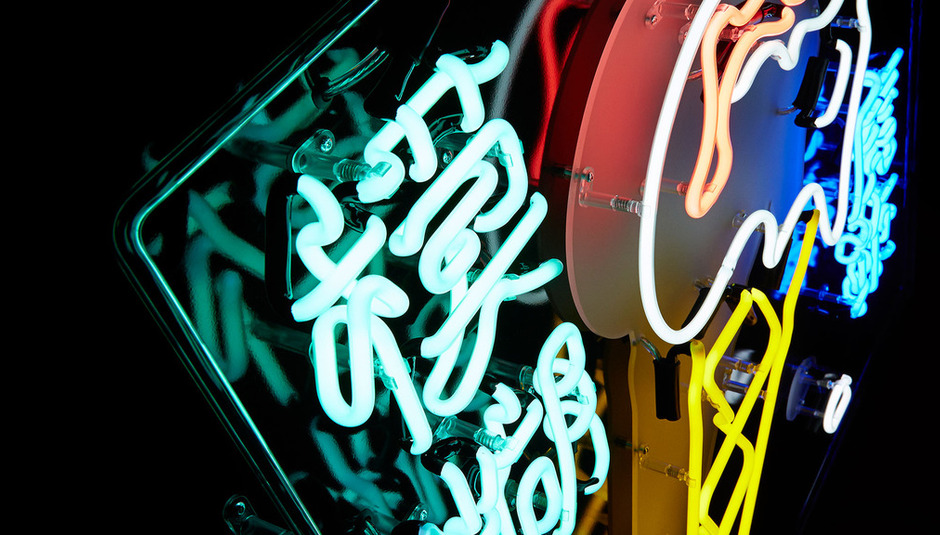 Ahead of the DiS review, Marc Burrows explores and examines the eagerly anticipated new Blur album, The Magic Whip.

As openings go, it couldn't be any more 'Blur' could it? There's Graham Coxon's guitar moving between big splashy chords and weird, off-kilter little riffs and niggles, there's a fizzy bass part that has 'Alex James woz ’ere and he really likes pop music' written through it like a stick of rock, and a Damon Albarn vocal that is as full-on cockney guv'nor apples-and-pears-would-you-Adam-and-Eve-it as he's ever been. At one point he's even going on about catching the "5.14 to East Grinstead." The message is fairly clear: this is BLUR, actual, real, just like you remembered 'em BLUR, deliberately referencing their Britpop-era records with a bubblegum backing vocal that echoes the "blow me outs" from 'Country House' and a mishmash of radio voices pointing to Parklife's 'London Loves.' It's something of a red herring because the rest of the record isn't so brazenly throwback, or so brash. It sets the scene rather well: we are back and we mean business. Graham even gets a verse to himself, reassuring us that the Think Tank ghost is well and truly laid to rest- as if his presence wasn't fairly obvious from the first slash of guitar. The song reflects the city where the album was birthed and Albarn's primary lyrical inspiration: Hong Kong. It's busy, it's crowded and there's a ton of things happening, but there's also little bubbles of beauty to discover. A gloriously confident opener.

Contrasting 'Lonesome Street' this is perhaps more the Blur you were expecting, especially given that the last music we heard from them was 2012's wistful 'Under the Westway.' Albarn is back in his quiet, melancholy mode -generally where he's best these days, as demonstrated on last year's Everyday Robots- and there's a pleasingly understated quality to proceedings with some beautiful playing from Coxon and a lovely, sparse drum part from Dave Rowntree, creating a sense of space and tranquility.

You’ll have had some time with this one since it appeared along with the album announcement. It’s retained some of that first-listen excitement, though it loses some of its shine in the wider context of the record. Despite that 'first out the trap' status ‘Go Out’ is one of the less likeable songs here and more interesting than it is enjoyable, though there's some appealingly noisy Coxon guitar and Damon’s satisfyingly Blur-like “oh-uh-oh-oh” vocals to enjoy. There’s a Great Escapeish feel here, in the way it manages to be poppily exuberant with an edge of something more sinister lurking beneath.

Another disquieting, slower one; driven by a weird electronic squiggle that phases in and out of the beat, giving way to an instrumental midsection where the chemistry between Alex, Graham and Dave is tangible. It might be about an actual ice cream man, though the contemplative tone Albarn gives his words suggest there's probably something more interesting going on than just the "screwball, chocolate chip, umbrella in his white gloved hand" of the first verse. There's echoes of Gorillaz' weirder, more wistful moments here, which is no bad thing.

Thought I Was A Spaceman

A contender for the best thing here, and possibly one of the best things they've ever done. Starting in very-much Everyday Robots mode, with a distant, mournful Albarn imbuing some real sadness and soul to a compelling electronic bed, the tone shifts at the midpoint as the whole band kicks in, sliding off the back of Dave Rowntree’s snare roll. There's a note of optimism that comes with them, and some glorious playing with a really effective Graham Coxon vocal towards the end, where his voice- much less rich than Albarns- manages to make the titular not-spaceman sound even sadder. It’s a reminder of just how special Blur can be- and how complementary they are as musicians. What would have been a nice moment on an Albarn solo record becomes a living, breathing masterpiece of chemistry. It's also, along with 'New World Towers,' a different Blur to the old one - they would never have written this ten or 20 years ago, and it wouldn't work on any of their previous albums. Complex and mad and beautiful.

If 'Thought I Was A Spaceman' showed us the evolution of Blur, 'I Broadcast' -probably by design- takes us completely the other way. This is the most old-Blur thing here, and could easily have been a Great Escape or Blur out-take (and that’s not damning with faint praise: those two albums are a golden era for b-sides). The bulk of this album was written in the middle of a play-the-hits world tour, which might explain how this ended up straddling the band’s history. It's shouty and stompy and a bit throwaway, but it's so BLUR you can't help but fall for it. It'll be a blast live, too.

Another highlight and another sad one, featuring a beautiful vocal from Damon. Lyrically there’s a sense of looking backward here, at something receding into the past: "the bright rays we got in summertime/ felt like a breathe of fresh air/ when we were more like brothers/ But was that years ago." It’s tempting to interpret this as a reflection on the four men's relationship, now hitting the quarter-century mark. The chorus is a sobbing doozy as well: this kind of still melancholy is, vocally at least, where Damon Albarn is at his best, and he adds real soul here. A less-is-more approach with some great electronic flourishes and some lovely, melodic work from Alex give this proper heart, and again it feels like an evolved version of the band.

There Are Too Many Of Us

You’ll have heard this one already. One of the stranger moments here, with an opening drum-and-synth tattoo that brings to mind, of all things, Eighties Queen; a video-game instrumental section and a sense of quiet menace. Dave Rowntree invents the genre of Claustrophobic Disco, and everybody keeps themselves reined in. Brittle and effective and quite, quite odd.

In which the quartet turn their hand, legitimately, to dub-reggae. Alex and Dave lay down a relaxed, bass-driven groove that would be at home on Albarn's The Good, The Bad and The Queen album, while Graham chops in Chic-style funk guitar. It's rather affecting and maintains the introverted tone that dominates much of The Magic Whip, it's also a reminder that way, way back in their days as Colchester school boys, a teenage Damon and Graham bonded over a mutual love of the Clash and the Specials: the darker end of both those bands feels like an influence here.

The closest Blur have yet got to Gorillaz, with a "la-la-la" instant sing-along built in, and a chipper chorus of "I wanna be with you" which will embed itself in your skull the second you hear it. Graham is the secret weapon here, his solo's have bags of character and his backing vocal adds a lot of the charm- it's a reminder, perhaps, of how Think Tank tracks like ‘Good Song’ could have sounded had he stuck it out. A cute slice of laid-back pop.

‘Pyongyang’ was inspired by Damon's trip to North Korea, and that society looms large across the track. While ostensibly gentle there's something quite sinister happening below the surface: a tangible sense of oppression, and some quite alien sounds. It’s a song that rewards a good pair of headphones- full of subtle, gorgeous touches, both strange and beautiful. This is a genuinely impressive piece and says something of Albarn's maturity as a composer, with hints of his work on the Monkey: Journey To The West and, especially, Doctor Dee soundtracks. Another deserved nod here should be made to Coxon's seemingly endless creativity: his simple three-note riff is what keeps us grounded through the odder moments, while his artyer instincts are still very much in evidence elsewhere. This is, in short, excellent.

A suitable finale to what -who knows- could be the last Blur album. Not big or opulent, but certainly elegant and graceful. It’s a proper ballad, though a fairly subtle one led by a reverb heavy riff, with the guitar, vocals and bass all following the same melody. Again it’s an exercise in restraint, it feels like everyone’s holding back a little, which gives the song some real tension. Damon sings ”I’ll cry my eyes out, hold close to me” as eastern strings provide the song’s only counter-melody. It’s gorgeous.

It’s a harsh Blur fan that won’t be satisfied with The Magic Whip, which manages to sound familiar while still heading in some unexpected directions: as they have done with every record, Blur have moved themselves forward. That said, It’s at its best when it’s at its subtlest, which could prove a challenge when transferred to Hyde Park or the Isle of Wight festival this summer- there’s no ‘big’ songs here- no ‘Tender,’ no ‘Parklife,’ no ‘Song 2.’ Instead there’s subtlety, grace and a chemistry that is unmistakably Blur. The Albarn/Coxon/Rowntree/James songbook already has enough terrace anthems,The Magic Whip has added a different layer to their legacy, one few of us thought we’d ever get- 27 years since they formed and they’re still moving forwards.

Blur headline the Isle of Wight Festival on 13thJune and play British Summer Time in Hyde Park on 20th June.