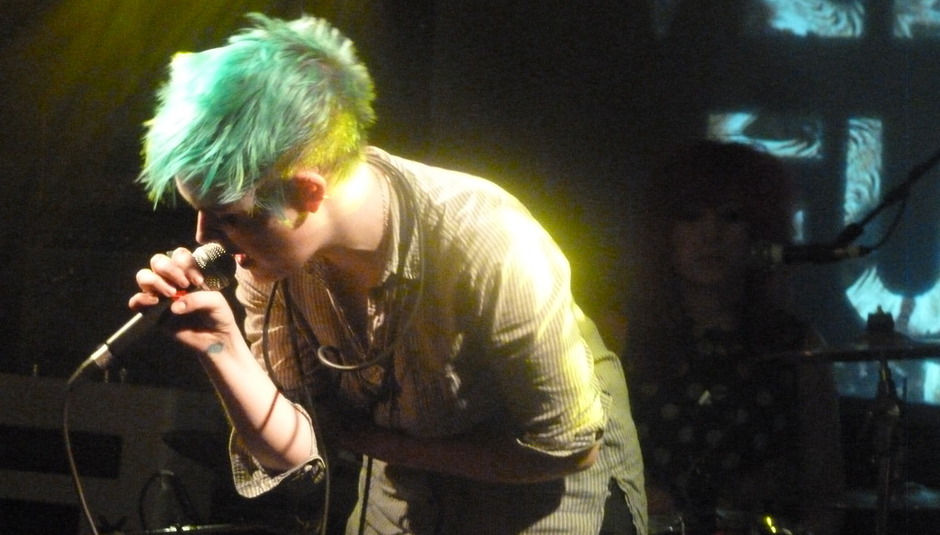 Lincoln on a Friday night might be something a group of football supporters would sing on an away day and sounds even less pleasurable. To make matters worse, the torrential rain causes us to take refuge in a side street public house (the George & Dragon) where warm Carling cider is served in plastic pint pots and our request for the phone number of a local taxi firm is met with... "Where are you going?"
"The Scene"
"Isn't that a gay bar?" "And what if it is?"
Charming. Welcome to Lincoln.

Whisper it quietly but The Scene has been at the epicenter of its city's local music scene for several months now. Thanks in no small part to DIY promoters Velvet Fuzz, the likes of The Telescopes, The Wands, Asteroid #4 and One Unique Signal have all played here recently, with shows booked up until March next year when Sleaford Mods will grace the tiny stage of this upstairs room.

However, tonight's bill reads like a showcase of sorts as four hotly-tipped acts from around the UK take to the stage. First up are Cold Water Souls, a five-piece from Derby. Playing only their second gig since forming earlier this year. With a line-up comprising former members of Lost Alone, Rugosa Nevada and Mint Ive respectively, their pedigree is there for all to see. Frontman Dan Holdsworth's vocal delivery captivates throughout, occasionally reminiscent of a young Jimi Goodwin or James Mudriczki yet oozing with a confidence far outweighing his band's embryonic status. Playing six songs this evening with midset slow burner 'Lost In The Fire' the pick of the bunch, they're surefire ones to look out for in 2015.

They say you should never judge a book by its cover. You shouldn't necessarily judge a band by their name either. Take North London-based Cure enthusiasts Desperate Journalist for instance. Reared on a diet of quintessential English bands of a post-punk persuasion, they're a spikily intense bundle of joy wrapped in a new wave (of new wave) scented blanket. Opener 'Control' takes its cue from some of Britpop's more interesting artefacts (think Elastica, Echobelly or MK13) while the gnarling 'Kitten' validates those early Siouxsie & The Banshees comparisons that have followed the band around since their conception at the start of the year. Penultimate number 'Cristina' doffs its cap to the other side of the Atlantic, coming on like a haughtier distant relative of Martha & The Muffins 'Echo Beach'. They also possess a bonafide show stealer in the shape of energetic leading lady Jo Bevan. Deftly owning the stage as though it were her own from start to finish of her band's set, she's a mesmerising presence whose demeanour veers from agent provocateur to statuesque (punk) poet laureate at the flick of a wrist. Ably backed by the best dressed set of musicians this side of the millennium, Desperate Journalist clearly have the look to go with their sounds. What more could anyone possibly want?

Leeds five-piece Autobahn have grown in stature as the year's progressed. Although still in their infant days as a band, support slots with numerous bands who've passed through their native city and a month long tour with fellow shoegrunge punks Eagulls has stood them in good stead. Vocalist Craig Johnson commands the stage from the front, a mass of unkempt hair and awkwardly projectile limbs throughout. Songs like 'Force Fed' and 'Unhinged' remind us of those inaugural Horrors gigs minus the shock tactics. Meanwhile, closing number 'Seizure' could stop traffic such is its riotous fury. Elsewhere, new compositions 'Immaterial Man' and 'Missing In Action' suggest their forthcoming long player - due to be recorded in January - could be one of 2015's finest debuts. For now though it's in the flesh where Autobahn stand out menacingly from the crowd and tonight is no exception.

When The Eighties Matchbox B-Line Disaster announced they were calling it a day once and for all in May of last year, many a tear was shed at the demise of a band whose potential far outweighed their achievements. Nevertheless, the smart money was always on members of their collective rising to the fore once more. Which brings us onto Piano Wire, the new project of guitarist Andy Huxley and bass player Sym Gharial. Together with drummer Lenny Verralis and second guitarist Sean Duke, they're conjuring up a veritable shitstorm that sounds like it was formed in Minnesota three decades ago via Seattle ten years later rather than the English capital city they inhabit. Traces of Husker Du illuminate 'Fossils' very core while 'Crushing Violet' references the most primal moments of SST Records back catalogue. Of course it's still very early days for Piano Wire. Tonight is only their seventh show and first outside London, but if they can maintain the promise evoked by this evening's performance, a prosperous future awaits.