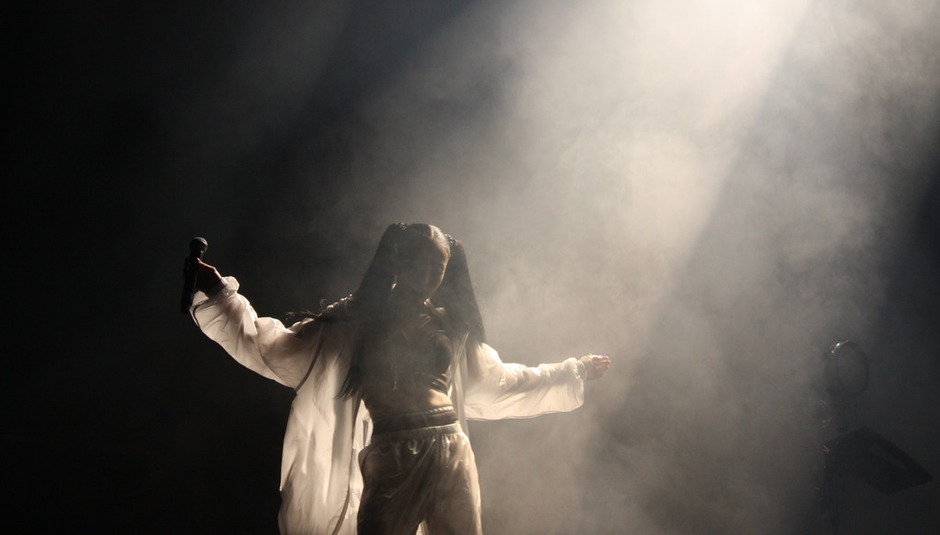 FKA Twigs: Beyond the hateful hype and Prince, Aaliyah and Kate Bush comparisons

FKA Twigs: Beyond the hateful hype and Prince, Aaliyah and Kate Bush comparisons

Ahead of this year's Mercury prize, DiS in partnership with Naim Audio's new wireless music system, mu-so, will help you GoDeeper into 2014's nominated albums. Today, we would like to turn your attention to the fantastic debut album by dancer turned alien-pop phenomenon fka Twigs. Visit our Mercury mini-site for J.R.'s 9/10 review of LP1 and Dom Gourlay's thoughts on the rise of fka Twigs, plus more coverage of all of this year's nominees.

There was this woman who had been feeling really bad about her behaviour. She went to the Catholic priest in her village and said, “Father, I’ve been saying these things about my neighbour and I don’t know if these things are true. I feel awful but I can’t stop saying them.” He replied, “I’ll tell you what you can do. Take a feather pillow to the top of the highest roof in the village and once you’re there, take a knife to the pillow and let the feathers fly from the roof.” The next day, the woman did this. She returned to the priest and told him how she had completed his task but did not feel any better. “Now, I want you to collect each and every feather, one by one, and place them back inside the pillow,” he said. “But how can I do that?” she exclaimed. “They could be anywhere. There’s no way I could find each and every one”. The priest turned to her and said, “That my dear woman, is gossip.”

This was the story Tahliah Barnett told in the middle of her set at Bristol’s Trinity Centre. “I’ve always loved that story,” she said. “It seems strangely apt to my life at the moment.” Whilst some of the audience yelped in appreciation of the story, others turned to me and said, “I wish she hadn’t talked. Kinda ruins the mystique doesn’t it?” before saying that they were only there to witness the ‘voguing’ they’d seen on a YouTube clip.

FKA Twigs is a post-triphop queen, whose production skills, sensual vocals and sexy-as-hell artistry has compared her to the likes of Prince, Aaliyah and even Kate Bush. We’re treated to a pitch black stage, a room filled with smoke and props of church-like candles adorned all over the place, before Twigs erupts on stage with seamless sways and record-perfect vocals. Teasing the crowd with whispering suspense before exploding into an R&B haze of flittering electronica, this is a performance to truly stand back, admire and digest. But sadly, the ‘hype’ surrounding FKA Twigs causes most of the audience to chat, take a photo, chat, take a video, chat and then moan about how she’s not as mysterious as they’d like her to be.

This is the problem with hype artists. These people want her to be this sensual, almost other-worldly being and then become annoyed when she turns out to be an actual human – a 26 year old woman from Gloucestershire who talks about how Bristol was the place where her and her friends would go Christmas shopping. They want mystique and yet, they’re whispering about how she’s going out with that Twilight bloke. “Why does hype change people’s opinions so much?” a friend posted on Twitter the next day. “A few months ago, my friends hated FKA Twigs and now they love her.” Hype causes people to look past the music, caring only of their own personal stance on the artist in question (hi, here I am writing about my personal opinion but try to stay with me) - the 'oh, she isn't worth the hype-rs'. It causes almost every publication and person to nit-pick every little detail about the person and not the artist; for the audience to capture every moment to gain street cred on social media and for this crowd to expect FKA Twigs to be the artist they want her to be.

Of course hype is great for exposure of the music but there's yet to be an artist on the Mercury Music Prize roster that has been dissected as much as Barnett. Recently Twigs was the subject of horrific online racist abuse because the tabloids decided to create a story about her personal life. ‘Robert Pattinson’s girlfriend FKA Twigs strips off her skirt and reveals fishnets and ripped swimsuit during Hackney gig,' is blasted across the Daily Mail's website, with a handy link to the Agent Provocateur swimsuit she was wearing. We can't expect much from the Daily Mail obviously but this is just one example of the internet-age approach of click-bait focused headlines that will eventually suffocate the creativity from our favourite artists. "Within my privacy is where I find my creativity, so if too much of that goes, I’m done. No more talks. If I lose too much privacy, that's it: I'm gone. I would still want to create, but I'd just create quietly," she said in a recent interview. FKA Twigs creating quietly? That would be huge loss.

Honing in on her love life is detracting from the exceptional debut album that so rightly deserves its place in the Mercury prize list. Whilst some aspects of her style adhere to her visual artistry – and it's actually brilliant witnessing the teenage odes to Twigs' already iconic hairstyle at the gig – others are consumed in the wrong way entirely. The delicate and honest lyricism surrounding love, sex and intimacy within LP1 is being overshadowed by our incessant thirst to know every personal detail about the artist – and to know it first. Ironically, we're then unhappy when the artist 'breaks character' on stage.

We're ignoring the visuals that FKA Twigs has created for us – her late 90s, Bjork-inspired music videos; her surreal yet sensual artwork; her choreographed performances and her carefully selected attire. Soon enough, artists aren't going to bother with creating a character and we'll be left with an industry full of too-much-information. No wonder the likes of Kate Bush and Yeah, Yeah, Yeahs have started banning phones and cameras at their gigs – we're all too busy showing off our gig credentials to really digest and appreciate what's happening in front of our eyes, right there, right now. Alexis Petridis summed it up pretty perfectly during his review of LP1: "In the age of social media, it doesn't work: however long you spend cultivating an intriguing persona, someone is guaranteed to swiftly pop up gleefully brandishing the mundane truth about you. When they do, it can damage your career. For reasons that aren't entirely clear, people have recently shown a marked tendency to get all 'how-dare-they?' when an artist is revealed to be pretending to be something they're patently not, as if they think pop music should be covered under the Trade Descriptions Act."

LP1 is an example of exceptional production; the layering of vocals, the interweaving of past influences and future genres, the blend of honesty and mystique and the impeccable delivery of each song during live shows. It oozes sexual authority whilst giving an original vulnerability that makes these slow-jams unlike any other. It propels us into this euphoric haze before soothing us to an enveloped slumber. It seamlessly threads from song-to-song, collapsing into a whispering finish. It's a rare find in a genre that can often be too obvious, making LP1 a work to truly cherish. We just need to put our phones away to truly appreciate it.