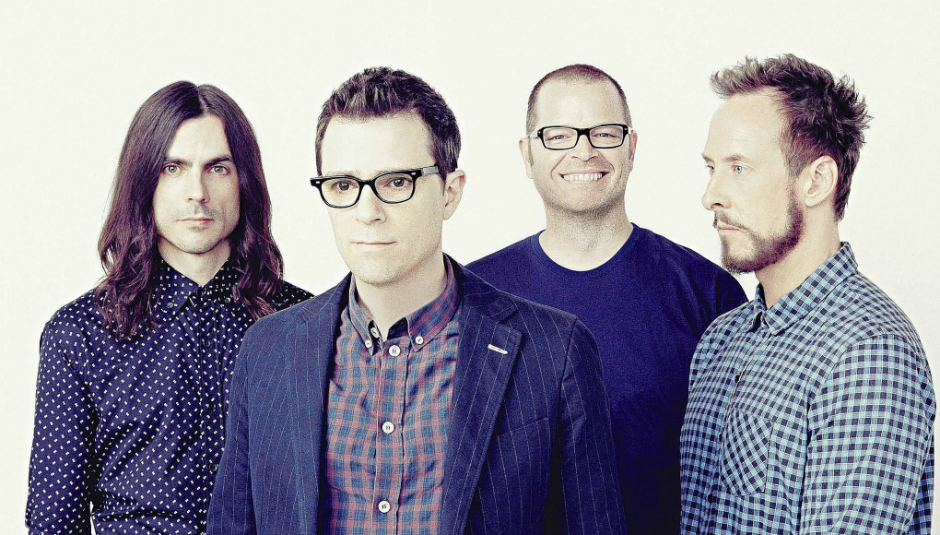 Hello. Thanks for tuning into a jam-packed DiS Does Singles. As ever, we've got a slew of immense new songs for you to enjoy from the past seven days.

Weezer are back with their latest album this week and its best bits really are immense. That's why 'Lonely Girl' and 'Go Away' share Single of the Week.

Elsewhere, TV On The Radio are shaping up for a revitalising return, These New Puritans have recorded their orchestral show at the Barbican for posterity, and Cloud Nothings have gone too far in the vintage tech revival stakes.

Plus, we've also got fresh offerings from Cheerleader, Speedy Ortiz and Gengahr.

Who'd want to be Rivers Cuomo?

The chap with the lightning strap who's stuck in arrested development and still defined by his first two albums. Weezer's frontman is so in awe of these past triumphs that his noughties output pays fawning tribute to them, thereby excusing what has followed.

"Memories make me want to go back there," he eloquently sang on, erm, 'Memories' from 2010's Hurley.

This is what the fans have demanded, and so they have been rewarded. With album-in-full shows, deluxe reissues and cruise ship holidays, all beholden to the same 'Buddy Holly' legacy. Like a latter day Oasis, without the blithe denial, Rivers and his troupe of unspun jumper-lovers are stuck selling nostalgia, even when they have a new record out.

Or at least that's the established story...

While it doesn't lie too far from the truth, there's more to modern day Weezer. Most importantly, their Geek-in-chief is doing just fine. Everything Will Be Alright In The End may be the title of the LA-born band's ninth album, but it should really be called Everything Is Alright. Thanks For Asking, Guys.

One of the last times we saw Rivers live, he was playing guitar while wearing a wolf hat and bouncing up and down on a trampoline. Not long afterwards, he wrote a song called 'Where's My Sex'. It was awful, yet the point still stands: the bloke behind your records is a greater crowdpleaser than those first few records implied.

All of this context, the whole lot of it, brings us to 'Lonely Girl' and ‘Go Away’. Both produced by The Cars' Ric Ocasek (i.e. him from the Blue and Green albums), the two songs present contrasting sides of the same idealised coin. On the one hand you have a sweet, young damsel who deserves to be saved, on the other there’s a narcissistic man child who can’t muster the confidence to leave his own garage. You’ve seen this plotline play out time and time again in Judd Apatow movies, and the same goes for Weezer records.

“I’d never hurt you girl ‘cos that would be a sin,” promises Rivers on ‘Lonely Girl’... before doing exactly this on the Bethany Cosentino-featuring ‘Go Away’.

“I was wrong / I hurt your feeling when I did what I did / I learned my lesson I’ll stop acting like a kid / Can you give me one more chance?”

What saves these tracks from being all too run of the mill is that Cuomo excels at writing them. ‘Lonely Girl’ is a trim, FM rock song that steps on the overdrive pedal and grabs you by your lapels from the off. It squeezes all the classic Weezer tricks into two minutes and 50 seconds, including overlapping guitar melodies, a gleeful solo and childlike rhymes (“sad/bad”, “in/sin”, “dance/chance”).

‘Go Away’ riffs on the harmonising of ‘Holiday’ and ‘Island In The Sun’ to tell a plain and simple break-up story. Instead of engineering a happy ending, Cosentino concludes the song with a definitive kiss-off, “That was your last chance.” Likewise, ‘Lonley Girl’ is self-aware enough to poke fun at its own protagonist, “I’m lonely, so homely / Can’t you relate?”

It’s in these subtle subversions that the Rivers Cuomo conundrum really shines through. He wants to play to the cheap seats with his tongue firmly in cheek, and that’s a tough trick to pull of for 20 years straight. So the man with the thick-rimmed glasses has made some duff songs - more than a few. He's also made a catalogue of post-Pinkerton crackers too.

'Pork & Beans', 'Keep Fishin'', 'Hash Pipe', ‘Dope Nose’ and these two newbies spring immediately to mind, and they all add up to a greatest hits collection most musicians would kill to call their own.

So don’t feel sorry for Rivers. He’s going to keep on with this eternally infuriating schtick from now until we all lose interest, which hasn’t happened yet. Has it?

TV on The Radio

TV on the Radio “Happy Idiot” feat. Paul Reubens and Karen Gillan from Funny Or Die

When your band leader is a super-producer and you've garnered enough critical acclaim to sink a luxury cruise liner, it must be tempting overthink every song you write. Hence TV On The Radio's last record featured five different horn players. Since Nine Types Of Light, New York's premier art-rockers have been on an immediate streak.

'Happy Idiot' follows on from last year's 'Mercy', as one of the most infectious songs Dave Sitek and co have put their name to. Hollow stabs of bass and spindly guitar lines interlace with juvenile delight, while Kyp Malone does his best monosyllabic drawl. "I'm gonna bang my head to the wall / Until I feel like nothing at all," he utters with sardonic lethargy. Even the drum track is in on the joke - booming off into an echo chamber of synthesised infinity.

It's all surface, of course, but you can't help but succumb to its lustrous sheen. Skin deep rarely sounds this good.

So let's say you're (hypothetically) dating a saxophonist and, for some ungodly reason, feel the need to convince her that you enjoy songs that aren't by Morrissey. Here are some (completely made up) reasons why it would not be a good idea to take her to see These New Puritans at the Barbican with an expanded live orchestra:

1) Let's be honest, they're pretty miserable 2) Field Of Reeds isn't an album you 'get' on first listen 3) Jack Barnett doesn't really do singing in tune

On the plus side, the show was pretty amazing and now it's available for us to watch on DVD, alone and at a safe distance from our (totally fictional) girlfriend. Because regardless of age, gender or musical taste, air drumming along to 'Attack Music' is not an attractive thing to do.

While Here And Nowhere Else is our undisputed album of the year and ‘Now Hear In’ is a banger of the grandest magnitude, it’s new video is nigh-on unwatchable. Cassette Store Day already exists, please don’t encourage anyone to celebrate VHS tapes, or LaserDisc for that matter. Also, Arcade Fire and Michael Fassbender beat you to the papier-mâché heads thing.

The album is really good though, so don’t get too down on yourselves about the slip up.

On Your Side (Bright Antenna Records)

Cheerleader exist in a world full of dandelions, puppy dogs and head-over-heels, doolally love. We live a world of Tinder, Dave Cameron and 9-to-5 drudgery. Sometimes a little escapism goes a long way.

‘On Your Side’ is the Philadelphia outfit’s second pop-rock anthem in a row, following on from the shimmering thing of wonder that was ‘Perfect Vision’. It starts of with a sugar-laced acoustic strum, bops straight into joyous chorus and doesn’t care one jot for your cynicism. If you miss the teenage kicks of Ash and Supergrass, then here are their carefree successors.

Charity singles have a reputation for being abysmal, so thank goodness Speedy Ortiz have kicked the trend with ‘Doomsday’ - a brand new track that’s been released in aid of the Ariel Panero Memorial Fund at VH1 Save the Music. More akin to ‘No Below’ than ‘Tiger Tank’, this ode to ill-fated relationships does a neat trade in churning six-string fuzz and dense, knotty lyrics. So in other words, it’s a Speedy Ortiz song through and through.

The excellent Transgressive Records celebrated their 10th birthday last week, but the label behind Foals, The Antlers, Alvvays and many other superb acts kept powering on. Gengahr got a seance-themed video for their debut single ‘Powder’ and it’s pretty great if you to play ‘spot the cinematic horror trope’. Scattered across the clip are creepy children, china dolls and several ropey special effects, as well as a rip-roaring guitar solo. Now that’s what we call a party.