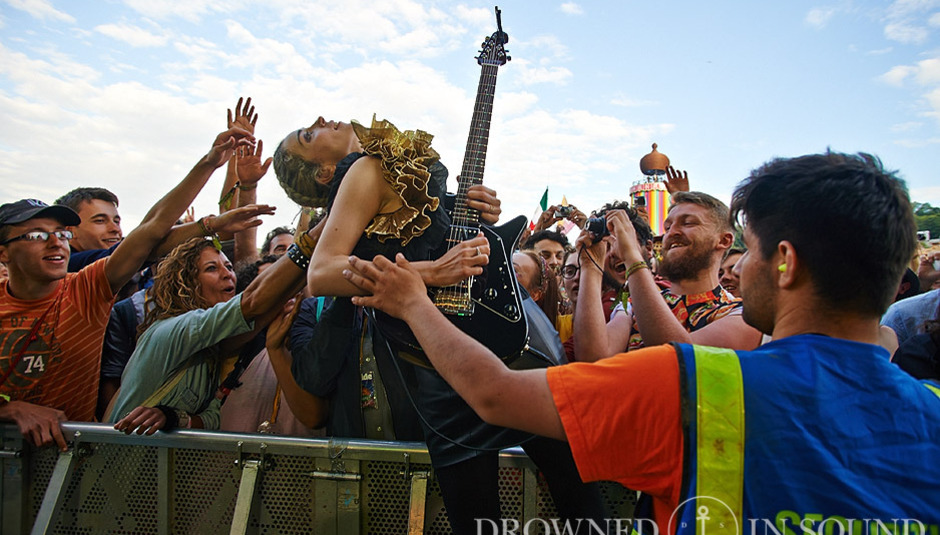 Of my friends who are particularly into music, almost all the boys claim to have been in a band at one point or another but I can think of only two or three girls who can say the same. Almost all the boys have felt inclined to pick up a guitar and learn it; about three of the girls have. There are even legit (but yeah, ok, slightly ageing) stats to back this up: boys play guitar, bass and drums, girls play harp (holler at yourself, Joanna Newsom). Seriously, you guys. Why is that?

The Telegraph recently published this piece of research into the number of female acts headlining UK festivals this year. They had a look at the line-ups, threw a graph together and, to no one’s surprise, concluded that “there aren’t many”. This news didn’t exactly shock the music industry to its core; there’s always been a gender imbalance in music - you think the Gregorians were big on letting the nuns have a go? - and for a long time it has been tacitly accepted as the way things are. (Pssst! I wrote a separate article with more stats in about this Telegraph piece, here)

Part of this is because it gets a bit boring when people start banging on about #feminism. If you venture into the comments, you’ll find a chorus of ‘ugh stop whining, it’s the music that matters, get over yourself’ – hey, I even AM a girl and I’ve felt exactly the same way. What difference does it make if you’re watching a man or a woman as long as the songs are good?

But then something happened. It happened, as so many life-altering experiences do, at a music festival. If you’ve ever been to Primavera Porto, you’ll know it’s way smaller than its Barcelona counterpart. It takes place in a park by the sea, in a town where one of the top three tourist attractions is literally “have a look at the roofs of the houses!” (spoiler: they are red). There are only four stages so it’s less about stumbling around with a glowstick behind your ear and no idea who you are, and more about flitting between bands, feeling some feelings then having a dance until suddenly it’s 4am and you’re ready to go back to your nice apartment for a sleep.

At Porto this year, I went to see Haim - not because I particularly adore Haim, but I’ve seen them before and they always put on a good show. The boys in our group weren’t too fussed but my friend Susi and I wandered down to the front. We sipped our G&Ts, bobbed our heads and watched as Haim played a very Haim set - there was bass-face and energetic drum-pounding, a few bona-fide bangers and a slight lull around the middle. Objectively, it was a pretty standard Haim set.

But something in that set felt like therapy. By the time Haim left the stage, we’d made a breakthrough: both Susi and I were grinning madly, full of all the musical possibilities of the world. It was more than being drunk and on holiday, having fun and getting all SISTERHOOD away from the boys in our group; it was something about seeing those women on stage having the time of their life playing music. We wanted a piece of that, and made sweeping plans to learn guitar and start a band despite possessing all the musical ability of a footstool. When we ran into some friends in the crowd, they were feeling the same things. We must have looked like the worst kind of cliche: five over-excited girls gabbling excitedly at each other, squealing and clutching each others’ arms and dancing to nothing as the adrenaline coursed through us.

What a feeling! It wore off as we went to the bar, got a hotdog and watched more bands but - amazingly, unexpectedly - it came back. Warpaint had us brainstorming band names, Courtney Barnett made us think we could write songs and St Vincent just made us feel as though we could do anything (and I am willing to bet that Speedy Ortiz and the Dum Dum Girls would have had us reaching for our imaginary guitars and convincing ourselves we could sing if they hadn’t been the victims of an extremely painful three-way clash with St V). But there wasn’t a single male act - not even those expert feel-givers The National - that recreated that energy and musical excitement in us.

I read this quote once - I wish I could remember where. A black lady was talking about how films show two or three very specific black female stereotypes. She never sees herself truly represented on film and that does something to you. If you’re only ever being bombarded with one image of yourself doing one type of thing, you learn that behaviour. You learn your place and that’s very difficult to break out of. After a lifetime of gig-going, it took seeing these women get up on stage and kill it one after another in such a short space of time to kickstart a sudden and unexpected enthusiasm for playing music. I'm 29 and I've never felt that way before. And hey, I did it. I got back from Primavera and picked up my housemate’s guitar - two months later I’m no Annie Clark, but I can do you something approaching a recognisable 'Jolene' or a slow and mournful 'Dammit', should you ever require it.

When women are accepted as just musicians, we’ll no longer have to be exceptionally brilliant (or hot) to win time on stage. Maybe then we can stop talking about “women in music” and just talk about actual music.

1) Why do festivals have so few female headliners?
2) DiS meets Joanna Gruesome: "Misogyny in music is so prevalent"
3) Does my enjoyment of Blink-182 make me a bad feminist?

Guyliners: Why Do UK Festivals Have S...

The best weekend for live music of my...