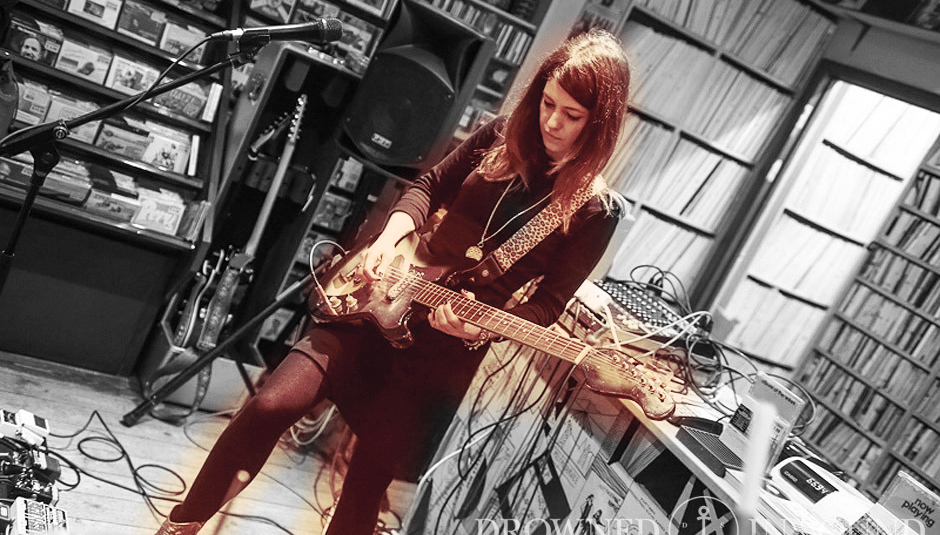 Hello and welcome to 2014, the year that Dolly Parton played a tiny saxophone at Glastonbury, Dappy was booed off stage at the Isle of Wight and the Fresh Prince played fresh pauper by joining Calvin Harris onstage at T in the Park. 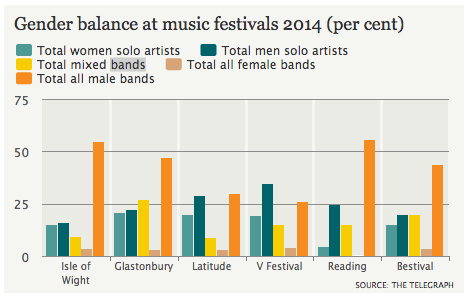 A tiny part of me reads this and says, Um, Does This Really Matter? It does matter, but I understand where that tiny part of me is coming from: this should not still be an issue. The year is 2014, not 1814, women have the vote now and everything. We should not still be having to waste precious internet ire on male domination of festival line-ups when there are pop songs to feel feelings about and, you know, actual music to be listening to.

Instead, some of us are still having to bang on about gender equality. Because those stats are pretty disgraceful and, while I don’t think anyone was particularly surprised by them, no one seemed particularly outraged either. Why aren’t we more pissed off at the fact that all-male bands and male solo artists together make up, on average, 67% of our major festivals’ line-ups? That means that only a third of acts playing Glastonbury, Reading, Latitude, V Festival, Bestival and Isle of Wight this year even have a female musician involved - and all-female bands come in at 3.5% of artists. 3.5%! Imagine what that figure would be if Haim took a year off the festival circuit.

All this comes following a year when female artists were riding high - Adele is still the most monied musician under 30 in the Times’ ever unnecessary rich list for last year, while Emeli Sande claimed the second-biggest selling album in the UK in 2013. Beyonce’s got the world eating out of her palm, people are quite literally losing their shit over Taylor Swift, the entire internet is in love with Haim and Sia has written every decent pop song for the past 24 months. So what is going on?

Booking a major festival is a job so massive the likes of you and I can barely contemplate it - I mean, I can count the number of gigs I’ve put on on no hands, let alone a multi-stage dual-site three-day festivals attended by 90,000 people a day all wanting something different. Add to that the soothsaying involved in working out what albums are going to do well months in advance , what acts people won’t get bored of, what acts you can afford and what acts will even be willing and able to come to the UK in the middle of their post-album touring schedule.

Festival bookers do seem to realise that they need to make a concerted effort to put more women on their line-ups. Emily Eavis said that “having women at the top of the [Glastonbury] bill is very important to us" and Reading booker Jon Mac told the Telegraph that “a historical precedent... needs to change.” Part of the problem is that festival headliners tend to tap into some kind of nostalgia. So thanks a bunch, continuing ripple effects of two thousand years of patriarchy. We can also thank the patriarchy for the fact that the pool of male acts in existence runs much deeper than that of women.

“If you look at aspiring musicians in the past, particularly in the rock, indie and dance worlds, there were more boys than girls trying to make a go of it and therefore breaking through,” Mac added. “Things need to and I believe are changing.” Sure, but the bands he sees as future headliners from an interview with Vice earlier this year? Foals and Disclosure.

At least Reading and Leeds Festival does come close to having a female headliner - Paramore is second only to QOTSA on the mainstage. The festival’s 2013 post-event survey shows the split of attendees was 50% male, 50% female at the Reading site and 51% male and 49% female in Leeds. That’s pretty much even stevens, but one female almost-headliner doesn’t really make up for the fact that all-male acts make up 80% of the line-up.

One band turning the tide at Reading is Blood Red Shoes. Making up part of the 15.9% mixed-gender bands playing the UK festival circuit this year, the Brighton-based rock duo are playing the mainstage too. “I think a lot of people don’t want to face that there could be something wrong,” guitarist, singer and songwriter Laura-Mary Carter (pictured above by Mike Burnell) told us when we talked to her about the gender split of British festivals this year. “But if you look at the figures, the ratio of women playing festivals full stop... it’s hard to believe the figures are so different.”

Laura-Mary explains that it’s a bigger issue in rock than more popular genres like, er, pop: “I think in the rock world it’s still very male dominated - there have been many festivals around the world when I will be the only woman on that stage or, on occasion, the only woman playing that day at all. I think it does have something to do with there being a lack of role models.”

“If you watch something like X Factor you see a million girls wanting to sound like Beyoncé or Rihanna or Adele - maybe if there were more women playing in bands then there would be more girls wanting to be the bassist or the drummer instead of automatically being the singer. I don't know if I would have had the courage to put everything into a band if it wasn't for all the positive role models I had. Like Babes In Toyland who I saw at the LA2 while I was still at school and it changed my life! That's when I realised I wanted to play like that and wear a dress. The two appealed to me very much.”

You want to hear another shocking stat? Only 13% of songwriters registered with PRS, the company that collects and distributes royalties for broadcast music, are women.

Fiona Bevan is one of that 13%. She reckons a lot of it is down to the fact that girls don’t see enough women musicians and songwriters out there while growing up. “There is an undeniably powerful process of identification at work when a young girl sees a confident female songwriter onstage,” she told us. “Girls tend not to pick up instruments and perform music in the same way as boys, partly because we don't see as many ladies up on stage. And the ladies we do see onstage are often there for their good looks and great outfits as eyecandy, as opposed to their raw musical talent.”

So what’s the answer? Well, I’m afraid the answer is that I’m really going to have to insist that you continue to give a shit about this. The good news is that things seem to be moving in the right direction. In the Telegraph piece that got me thinking about this, Latitude booker Natasha Haddad (who it turns out spoke the Telegraph months before the feature was published and announcing the likes of Haim, Chrissie Hynde, Kelis as main stage acts and Lykke Li and Robyn as second stage headliners, and Julia Holter as iArena headliner) tips “credible artists” like Lorde, Emeli Sande and Jessie Ware for future festival top spots. She says, “the future holds a lot of promise.”

But when we have a year like 2014 when women are so underrepresented on stage, it reminds us that there’s still a long way to go.

“Fortunately there are some great female musicians coming out and already out there,” Laura-Mary sums up. “But I think there need to be more. The more people do it, the less abnormal it will be and the more people will be inspired.”

My Story: How a festival filled with females changed my life.