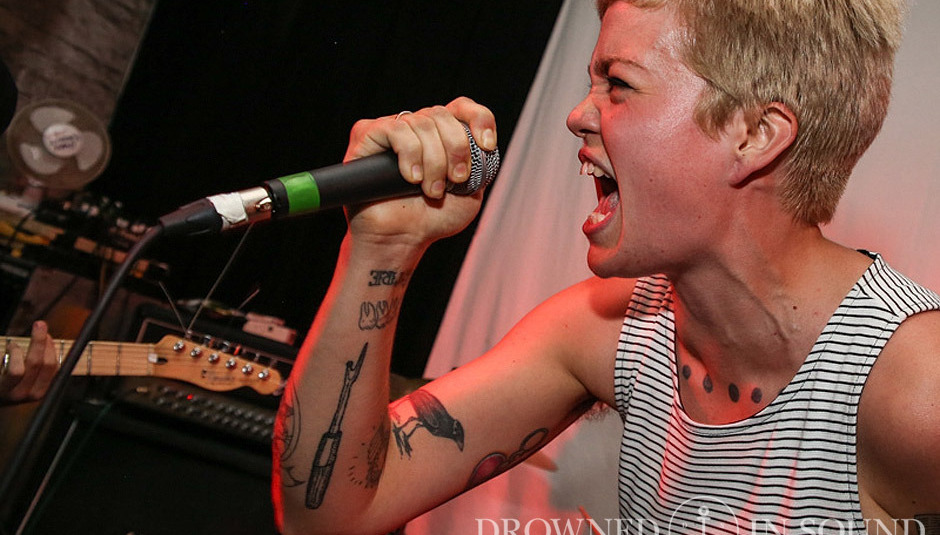 As the acts which played Camden Crawl will tell you, it hasn’t been the best year for one-day multi-venue festivals. They sound like such a wonderful and winning idea. But in practice, they’ve yielded uneven results – synonymous with traipsing around endlessly and impenetrable queues. How refreshing, then, to have the format so enjoyably packaged by Visions Festival, an event only two years old but startlingly well formed. It’s a beacon of good practice for what these sort of events can be.

Just looking at it on paper, the curation reveals itself to be sharp and bold. Wild juxtapositions of sound are glued together by a singular vision of quality – lurching across the contemporary alternative scene from riotous hardcore punk to wistful piano-based song writing, each act at Visions feels like it feeds into a trendy, overarching tapestry of what’s good now. The starkness of contrast between artists today is one of the event’s greatest strengths.

The day begins in the dank Laundry, with Cheetahs taking us though their deliciously sludgey blend of post-rock and post-punk in a bracing half hour blast. And, in the first of many of those smash-cut juxtapositions of the day, they’re followed by the ethereal falsetto of Alice Boman’s yearning love notes in the New Empowerment Church. Performing songs from both EPs, the simplicity of the songs is substantiated by her arrestingly clear but childlike voice, and the loose ornamentation of soft, live drums.

One of the most hotly anticipated acts of the day – Perfect Pussy (pictured above, by Mike Burnell) – are also one of the biggest disappointments. At their best, their sound is all consuming, washing you in layers of overdriven chaos not typically associated with music so blisteringly uptempo. But the mix leaves no space for detail, and absolutely obliterates the vocals, which is a great shame for a band whose poetics are integral to their punch. The room remains static, the band seems frustrated, and the set ends even sooner than its allotted half hour.

In contrast, the day’s out and out highlight is a joyous dance set from Sophie in the Brewery. Since the last time I saw him, his restless self-sabotage has been rounded off into a sound a little easier to engage with physically, rather than having beats drop from under you like trapdoors at every corner. The vocals are a crash course in how to turn an absolute monster of humid summertime hook, and the addictive, visceral momentum of his set brings the packed room to euphoria. The tracks he’s sitting on could make an LP to raze the charts and the underground in equal measure – a true treasure, and definitive summer music.

By the end of the day, one or two of the inevitable downsides to these things start to crop up. The venues are hot and crowded, and Perfume Genius has trouble cutting through the sweat with his fractured and vulnerable vignettes. But the overwhelming experience of the day is incredibly positive. The venues are great; they’re a stone’s throw away, and they’re accessible. It’s all the good stuff. As I looked over London Fields from the festival’s rooftop bar after an arm wrestling tournament refereed by Andrew WK (did I not mention that yet?) it was easy to come to the conclusion that Visions Festival has pretty much cracked this day-long, multi-venue format. And it’s only in its second year. Long may it continue.