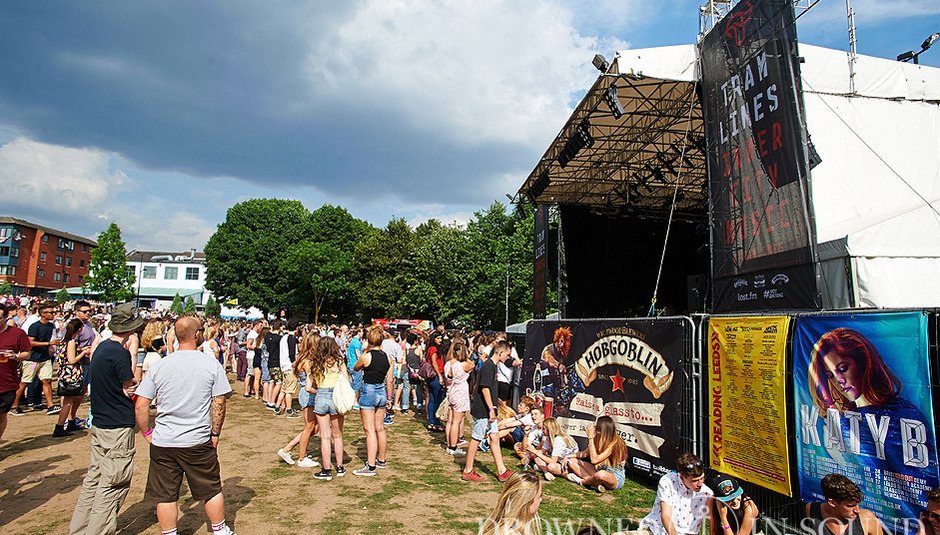 Having just completed its sixth year, Sheffield’s Tramlines Festival continues to expand from its beginnings in a few scattered venues. Relative to those days, it is now a behemoth; operating throughout a range of the city’s neighbourhoods and encompassing a fringe festival, a daily newspaper and generally increased usage of Sheffield’s venues and resources. Everything from Cathedrals to woodlands were utilised here, bringing about a curious mix of boutique and mainstream ethos and aesthetic. Ticket holders could be having their water confiscated and bag searched at the arena entrance at one instance, where an hour before they were sat in a woods whittling a pencil. It was somewhat jarring

Minor gripes aside, the line-up was strong, with the large arena area and main stage taking on the more commercial acts (Katy B, Sister Sledge, Public Enemy, The Cribs etc), the O2 academy and Student’s Union taking on the majority of big name DJs (Annie Mac, Simian Mobile Disco et al), and a myriad of other venues dotted around the city taking on everything else. Despite the aforementioned disparity between venues, bands and areas, the organisation was for the most part strong; in many respects Tramlines no longer feels like an urban festival, with this transition a remarkably subtle one. In such a large city as Sheffield, that is no easy feat.

With most people working on the Friday, the line-up was already relatively cropped, and DiS unfortunately had to forgo the confrontational gothic punk of Post War Glamour Girls due to logistical issues. Never mind, East India Youth made up for it later that night at the excellent, albeit utterly sweltering, venue of The Harley; his set making smooth, intelligent shifts from ambient, piano led experimentation to brutal, pummelling beats. With tracks such as ‘Hinterland’ and a phenomenal ‘Heaven How Long?’ grabbing the crowd’s attention where he was beginning to let it slip, William Doyle’s set was a reminder of the utter brilliance of his debut in January.

The next day saw an irritating organisational mishap in that Autobahn were listed to be on at both 5.30 and 8.30 in the programme, with the venue claiming the former was correct whereas others stood firmly in the 8.30 camp. A curious, futile debate, as they were on at 4.40 and DiS had missed them when they arrived. Worse things have happened at sea I suppose. Anyway, a visit to the City Hall saw Esben and The Witch sounding strong, with a much-hoped for airing of ‘No Dog’ standing out as a highlight. Elsewhere PINS also performed well, with the large crowd at The Leadmill appreciative to material both old and new. Future Of The Left then gave everyone’s eardrums a good splitting back at City Hall, with Andy Falkous and co. on riotous form; a hilariously long ‘last song’ medley and general smash-up delighting the crowd at the security staff’s expense. Excellent stuff. A trip to Sheffield University Union saw an excellent Simian Mobile Disco set administer the night’s beat-intake with their usual deftness, the inappropriately well-lit venue lessening the atmosphere somewhat, with the crowd’s wide-eyes and chomping mouths plain for all to see.

With heavy heads and sore feet (bring trainers to this one), DiS unfortunately missed the majority of Woman’s Hour the next day, an unexplained sound problem leaving people waiting far too long in a sweaty Sheffield Cathedral. The Cribs made up for this, laying down a nostalgic set based on early material which was lapped up by a huge crowd. A nice nod to the gone-but-not-forgotten Long Blondes showed the band’s roots in the area. Bo Ningen subsequently tore the roof off of Queens Social Club; their intense, driving psychedelia a nice contrast to the basic (but excellent) venue. The crowd had dissipated somewhat when Veronica Falls wrapped things up with a hit-laden performance of impassioned indie-pop, with early favourites such as ‘Stephen’ and ‘Beachy Head’ bringing Tramlines to an upbeat conclusion.

With other urban festivals perhaps boasting bigger or more current acts, few are as varied and well-executed as Tramlines. While there were a few problems with set-times etc, they largely managed to live up to the scale of their operation very well, with others seemingly having more of an emphasis on queuing than watching live music. With average festival prices spiralling further out of control year by year, Tramlines is an excellent alternative to the bullshit. Still pissed off about missing Autobahn though.