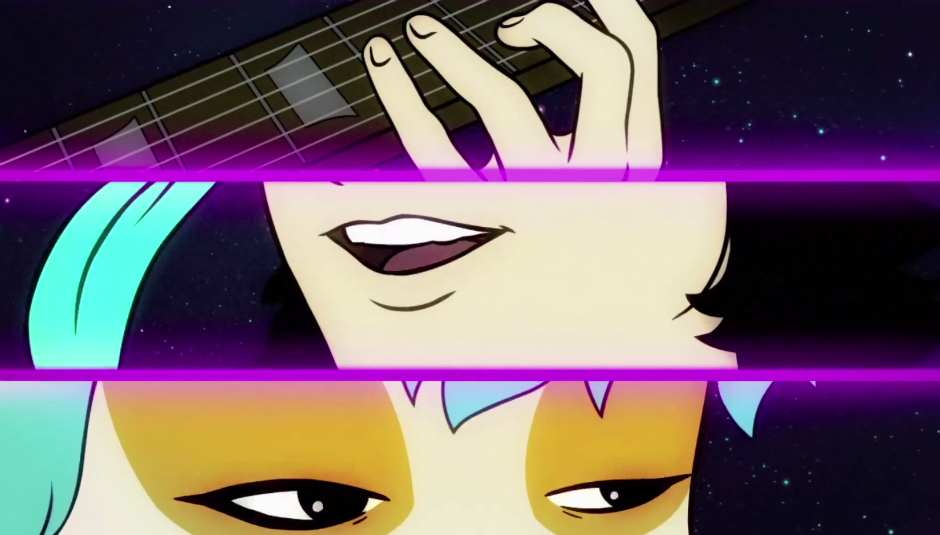 Hello there and congratulations. You've dashed across cyberspace just in time for a brand new edition of DiS Does Singles. Now make like a good egg and soak in our pick of the best new songs from the past seven days. They're all exceedingly good, in way that's beyond even Mr Kipling's comprehension.

For starters, La Roux's finally decided to stop polishing her Grammy award and get on with the business of making music. Then there's the video Arcade Fire made with Spider-Man - it's over six minutes long but we didn't yawn once when watching it. And that's not to mention Sharon Van Etten's latest cut from Are We There, a majestic album of domestic misery. Plus, POLIÇA, Hockeysmith and Wilsen have all chipped in to ensure your stay today is an enjoyable one.

As for Single of The Week, The Pains Of Being Pure At Heart have done something so delightful that you'll want to listen to cock rock on infinite repeat after witnessing it. Hey, we don't make the rules here - just slavishly follow them.

Until The Sun Explodes

The Pains Of Being Pure At Heart have always been a flight of sheer fantasy. Formed in tribute to the C86 era of indie, when ‘making it’ meant you’d put out an album, they loved the idea of being in a band and attempting to live up to their idols; even though that was never going to happen. 'I was really into Exploding Hearts and my life totally sucked in comparison [to them],' Kyp Berman once said of ‘Contender’. 'I’d see them and they were so awesome, and I felt like a total failure.'

And yet, TPOBPAH have outlived the MySpace page they first uploaded their songs to, released two albums via the hallowed Slumberland label, and worked with Flood and Alan Moulder. Not bad for a gang of indie-pop imitators, but where to next? Well… outer space, of course.

Founding keyboardist Peggy Wang may have left the band to join Buzzfeed but TPOBPAH remain as jubilant as ever. ‘Until The Sun Explodes’s video sees a bog standard band practice session elevated into a cartoon voyage to the center of the universe. With one stomp on Berman’s effects pedal the Brooklyn-born five-piece are transformed into a fey Mötley Crüe, donning neon headbands and zebra-print unitards while they rock out on the rings of Saturn.

You’d expect nothing less for the most bombastic track on Days Of Abandon, and TPOBPAH really don’t hold back. Preening guitar solos are played out on laser beams, stadium-sized drum beats come with cute thwack animations, and the whole thing concludes in a giant heart-shaped spaceship. Having been so deferential to rock mythology, this is Pains embellishing their own existence in rainbow-tinted Technicolor. Ignore the allusions to “stay[ing] clean” and “hospital light”, and you’ll be sold on the same dream Berman once was - even if his own love ain’t fucking right.

“Tell me now you know somehow, things will turn out right. If we stay dressed in our funeral best and sleep with open eyes,” he coos in nervous reassurance.

Despite the latent trauma, this galaxy’s greatest Field Mice fan hasn’t lost his escapist streak. ‘Until The Sun’s glut of power chords and garish eyeliner makes that entirely clear. Because when it comes to escapism vs reality, it’s always wise to err on side of intergalactic space travel.

Let Me Down Gently (Polydor)

‘Let Me Down Gently’ is a slow burn synth waltz that shares the same frayed Eighties threads as ‘Bulletproof’ and ‘In For The Kill’. “Let me in for a minute. You’re not my life, but I want you in it,” warbles the owner of pop’s best quiff (soz Moz) as saxophones serenade her amorous misfortune. Despite the time off, no one can match La Roux for kitsch, glistening electronica. A mass weep along on Worthy Farm surely beckons, sometime next decade.

‘Cinematic’ is often used as shorthand for ‘contains strings and drags on a bit’, but Arcade Fire really know how to inspire wonder on a grandiose scale. Their sweeping score for Spike Jonze’s Her proved a heartfelt foil to the boy-meets-operating-system story and now Win Butler’s bunch are at it again with the video for ‘We Exist’.

Starring Andrew Garfield as a troubled transexual, the skittish album track spits and cackles as The Amazing Spider-Man fumbles around his newfound identity. Although salvation through rock & roll isn’t the most original story ever told, we’re wholly sold on this subtle tale of LGBT acceptance. It brings Reflektor’s vagaries into focus and allows one of the world’s biggest bands to spout a life-affirming message in none-too-preachy tones. Well done everyone.

Every Time the Sun Comes Up (Jagjaguwar)

Also known as the song where Sharon sings “I washed your dishes but I shit in your bathroom”, ‘Every Time The Sun Comes Up’ is mid-paced mopiness of the finest variety. Harking back to the downbeat squalor of Tramp, this latest cut from Are We There comes furnished with little more than the ‘Be My Baby’ drumbeat and some softly plucked guitar strings. It's typical of the low key melodrama Van Etten revels in - where all-consuming sadness is conveyed without the need for a grand confessionals… or too much Number 2 talk.

Channy Leaneagh and co don’t hang about when it comes to new material. The forthcoming Raw Exit EP will be their third consecutive release in three years and, from the cut of its title track, it seems a worthy addendum to the glitching brilliance of 2013’sShulamith. “Who’s ready to die alone? wails Leaneagh through the band’s patented fog of vocoder-based blues - a trick they keep wringing wondrous new inflections from. POLIÇA are here for the long haul. Who’d have thought?

Sister duo Hockeysmith recently stepped up from living together in a caravan in rural Cornwall to living together in an abandoned tour bus instead. Slightly bigger changes are afoot with their music though, as 'Hesitate' represents a clear leap forward from the understated chug of last year’s 'Let’s Bang'. Pautious synth and shrill vocals intertwine over a needling bassline to offer a thrilling preview of what's in store for this sibling tag team. One more hop into into the great unknown and you feel they'll be a pretty big deal.

A little bit of Local Natives + a dash of Daughter = a whole lot of gorgeous.

Musings on Sony's New Tape That Can H...